“You need stamina and a good liver to enjoy all of the events. However for the festival-wise, who know how to pace themselves, it can be done; but, no-where else in the world do you get the unique combination of fun, friendly people, fine food and lively entertainment”. 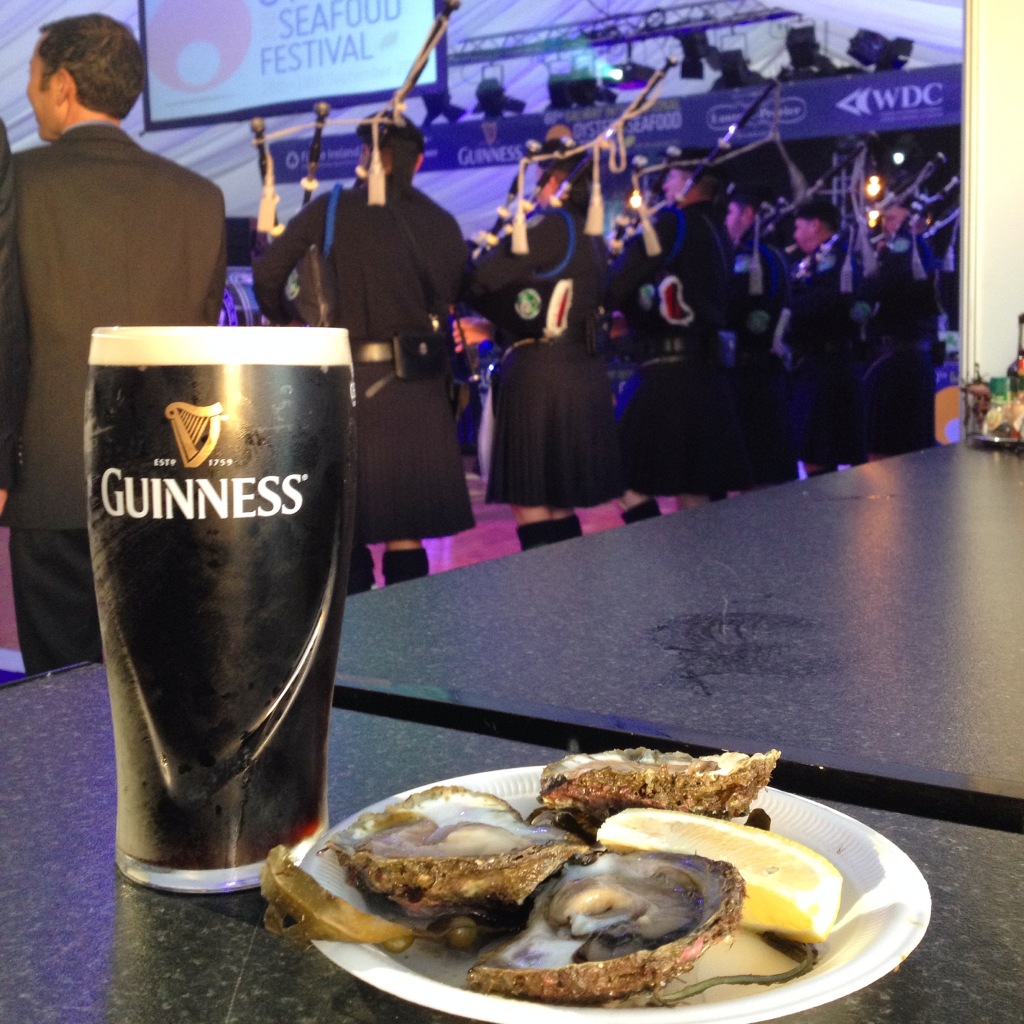 At first taste, it’s like a slap of sea air in your face.

The grey waves of the Atlantic surge in my mouth.

Then they recede. Leaving behind a saltiness that leaves me thirsty. Really thirsty.

I need something cold. Extra cold. I sip the milky goodness of Guinness. It surprisingly balances nicely the salinity of the oysters.

I proceed to gulp down a few more oysters. And drink Guinness. Lots of it. Before at some unearthly hour, I stagger out of the pub whose name shall not be remembered.

Stumbling onto the cobbled streets, I wind my way back to my lovely B&B along with a few very drunk Galwegians.

That, my first night out in Galway, is what is the Galway Oyster Festival is in a nutshell. 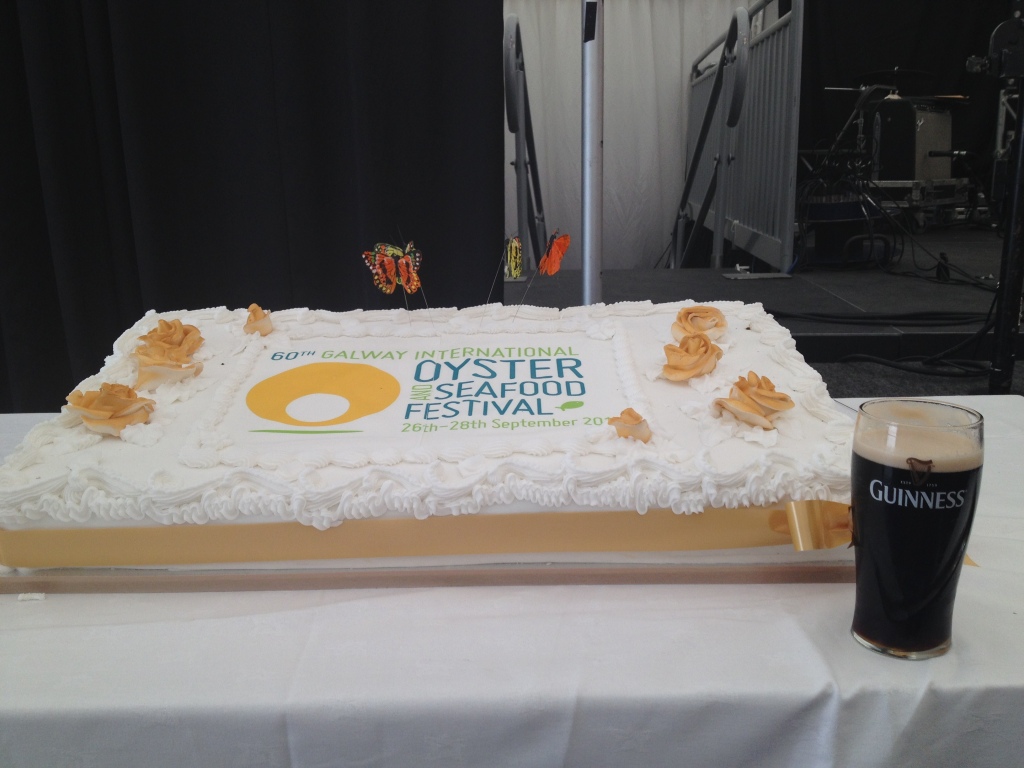 The local molluscs vegetate for three years in the clean waters of Brandon Bay and Clarenbridge before they are plucked and delivered to the city.

Traditionally one could eat these oysters for free at thirty of the city’s pubs as part of the Guinness sponsored oyster trail.

However, Ireland has fallen upon hard times. At a few pubs I enquire, they give me a shrug and shake of the head. Guinness still support but are not so strongly associated with the festival. The tradition has apparently been abandoned thanks to the recession that dragged Ireland into a deep abyss that it is just managing to climb out of.

Nevertheless, even if you can’t eat them for free, the oysters are still hugely affordable.

For the princely price of €12 I enjoy my first half a dozen native Galway oysters from McDonagh’s. Not a shabby deal given that these large and flat oysters (farmed by Diarmuid Kelly ) are used in top restaurants all over Europe, and have been acknowledged by Rick Stein and Delia Smith as being among the best oysters in the world.

listen to ‘’Story behind the Galway Oyster Festival’ : An Interview with Diarmuid Kelly, Kelly’s Oysters’ on audioBoom

I’ve make a weekend of it. I enjoy a day trip to the hauntingly beautiful Aran Islands with its prehistoric bronze age fort. It’s an hour long hop by boat from Galway bay. I am also a guest at the Galway Oyster festival which stretches over the weekend. The festival takes place in a grand marquee in Claddagh overlooking the beautiful Corrib river. 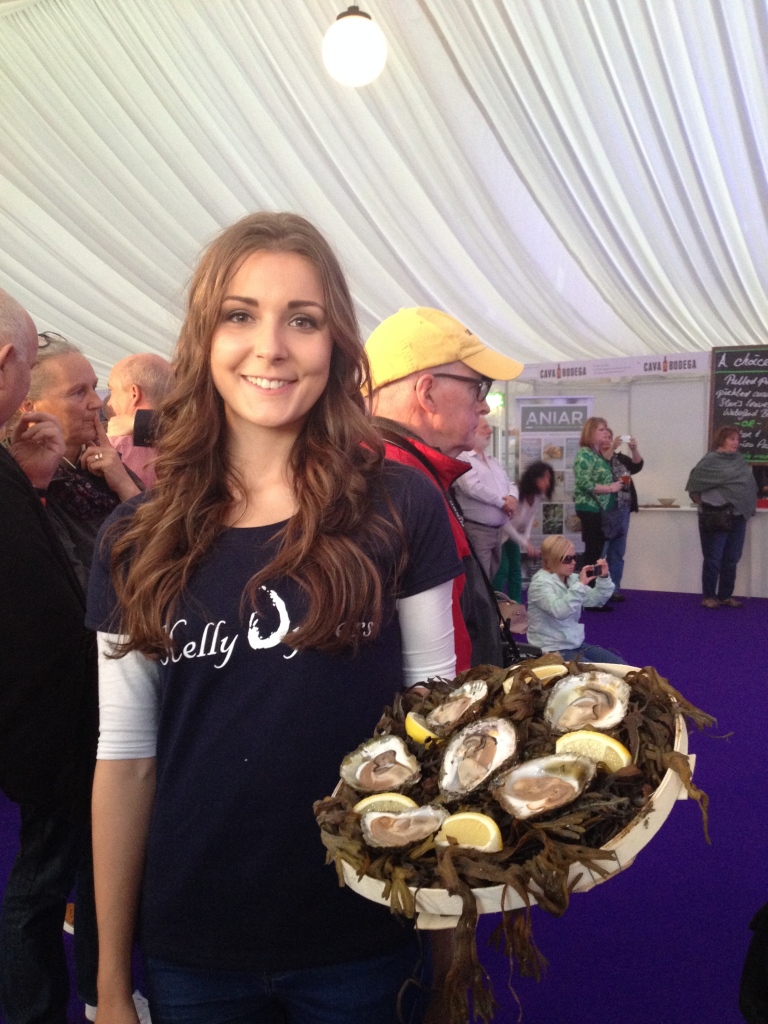 There is a host of events at the festival that tourists can dip into at the festival. On the opening Friday night, the newly crowned Oyster Pearl (the festival queen) presents Galway’s mayor with the very first oyster of the season- a tradition since 1954.

Once it is consumed, the party begins. Later in the evening, the Irish Oyster Opening Championships are held. ( At just €40 a ticket, including food and a drink, this evening is the best in terms of value for money ) Other highlights include the Oyster Festival Gala Ball where you can join a carnival of masked revellers and dance the night away enjoying non-stop entertainment and continuing your indulgence for native Galway oysters. 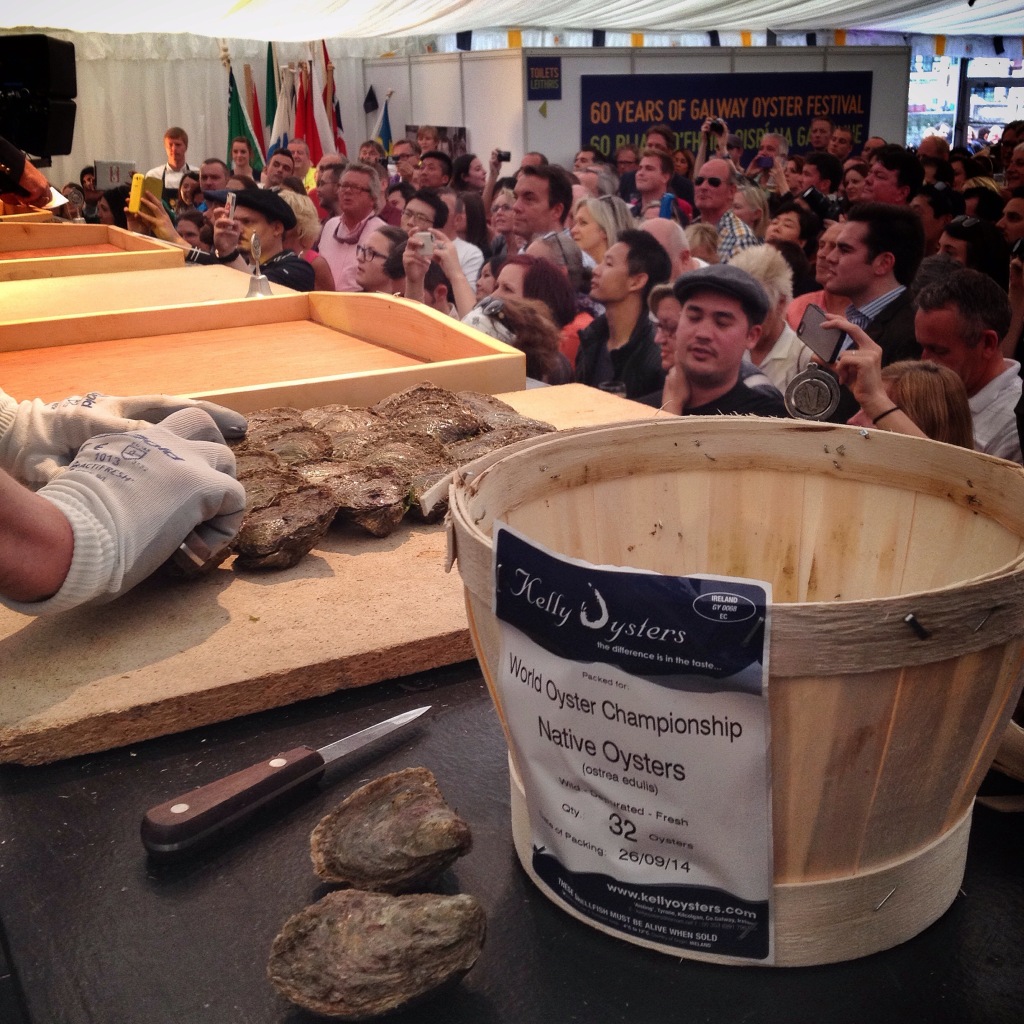 Plus there is the small matter of the world’s annual oyster opening championship.

The city of Galway has played host to the world championship for the last 60 years. It attracts the creme de la creme of oyster shuckers. This year’s championships have attracted representatives from far afield as China and Japan.

I not sure if oyster shucking will ever make it to the Olympics. However after meeting some of the participants I was left in no doubt that these is a serious sport for the guys. They haven’t not come here just for the Guinness and the craic.

I got the chance to briefly catchup with Larry and Petra Branthoover from Maryland who are part of the USA contingent . They are involved with the Rotary club of Maryland which has been organising the US Oyster Championship.

The oyster championship is the rotary club’s fundraiser which is in its 48th year. They crown the US champion who then goes onto have the honour of representing his country at the championships The honour this year goes to William “Chopper” Young. A shell fisherman in Wellfleet, Massechuesets. which is home to the famous Wellfleet oyster, Young was the American champ in 2007 and runner-up in 2008. 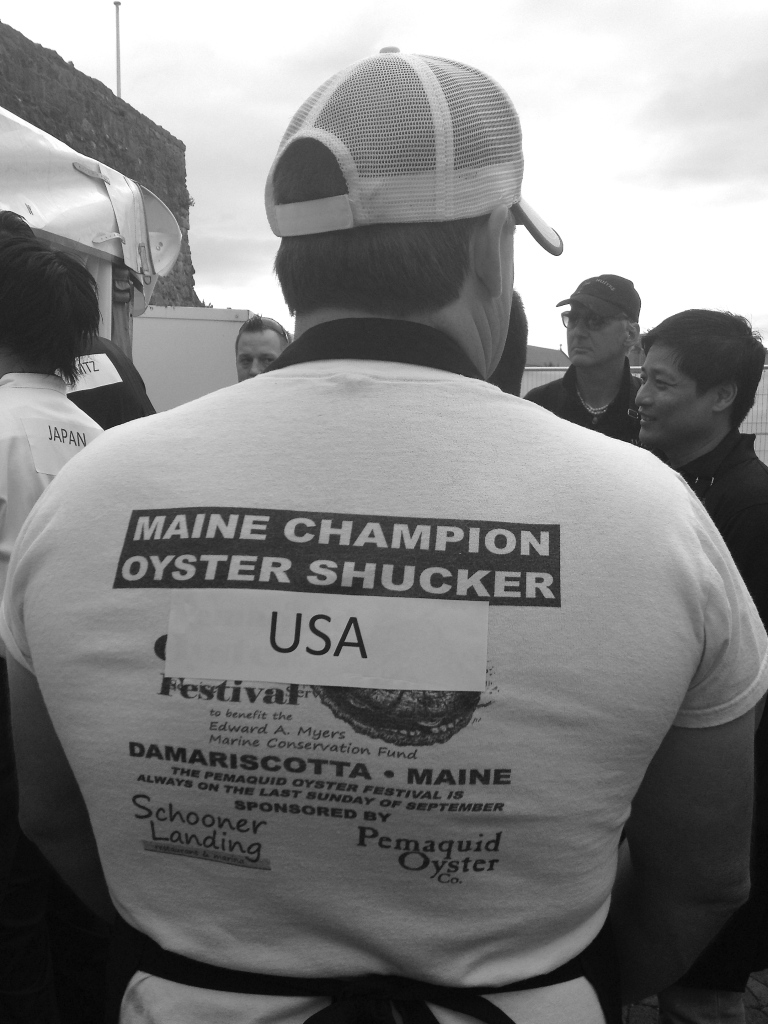 ‘We think he’ll finish in the upper half’ is Larry’s forecast when I asked about him ‘Choppers’ chances this year.

He then tempers expectations by adding …’ It all depends on the oyster. If he gets a good batch of oysters.’

Maybe the tiger will bring him good luck. Chopper is accompanied by the outgoing president of the rotary club, fondly referred to as the ‘King’ for his love of dressing up as a tiger during the championship.

Championship day. I scan the crowd and to my bitter disappointment, there are no tigers in the crowd.

On the other hand as the heats kicking off, the contingent of international oyster shucking champions are earning their stripes in their epic quest for gold.

It’s a raucous atmosphere. Each national champion seems to have brought a motley bunch of supporters in the crowd. Waving their national flags while slurping on copious amounts of Guinness , seized by nationalistic fervour they all vociferously egg on their countryman.

So how does Oyster shucking work?

You first of all have you need to have a pair of tough rubber or canvas gloves ( allows a firm grip ) as you can end up cutting yourself and losing the championship.

The rules leave little room for error. Each competitor is given 30 oysters and the aim is to open them quickly as possible and arrange them on a tray so that can be examined for flaws. A defective oyster can with the judges’ approval, be traded for a new one. Each competitor has his own timekeeper. When you finish your 30, you raise your arms and ring a bell. Competitors must not touch the tray after ringing their bell or they can be disqualified.

Besides the time, the competitors are judged on time and presentation. So there is a fine balance to be struck there. There are some stiff penalties. You get penalised four seconds for errors like if you leave grit in the oysters or damage the shell. The worst penalty is for unopened or missing oysters or a spot of blood which can add a whopping 30 seconds to the score.

It all makes for a thrilling finale which is won by Estonian Anti Lepik.

The party continues long into the night. After the championship, the annual Oyster Festival Gala Ball kicks off. At €100 a ticket (which includes a grand buffet and drink ) it’s not a cheap affair. I give it a miss.

I head back to the cobbled streets and follow the sound of music which is everywhere in this city. Pubs are packed to the rafters. Foot stomping tunes are being belted out. Guinness overflows from the tap. While there is only so many oysters you can taste in a day, there’s always room for the black stuff.

I see smiles all around. Everything is in perfect harmony.

Even though I am alone in Galway, I feel I am in a happy place.

listen to ‘The best Irish singers from ‘Best’ Netherlands’ on audioBoom

The Galway Oyster Festival  is held usually on the last weekend of September which is the first month of the oyster harvesting season. While the main events- Mardi Gras Ball and World Oyster Opening championships are pricey affairs, the festival parade on the Saturday afternoon is free. With plenty of noise, colour and excitement this is an event to enjoy for people of all ages. 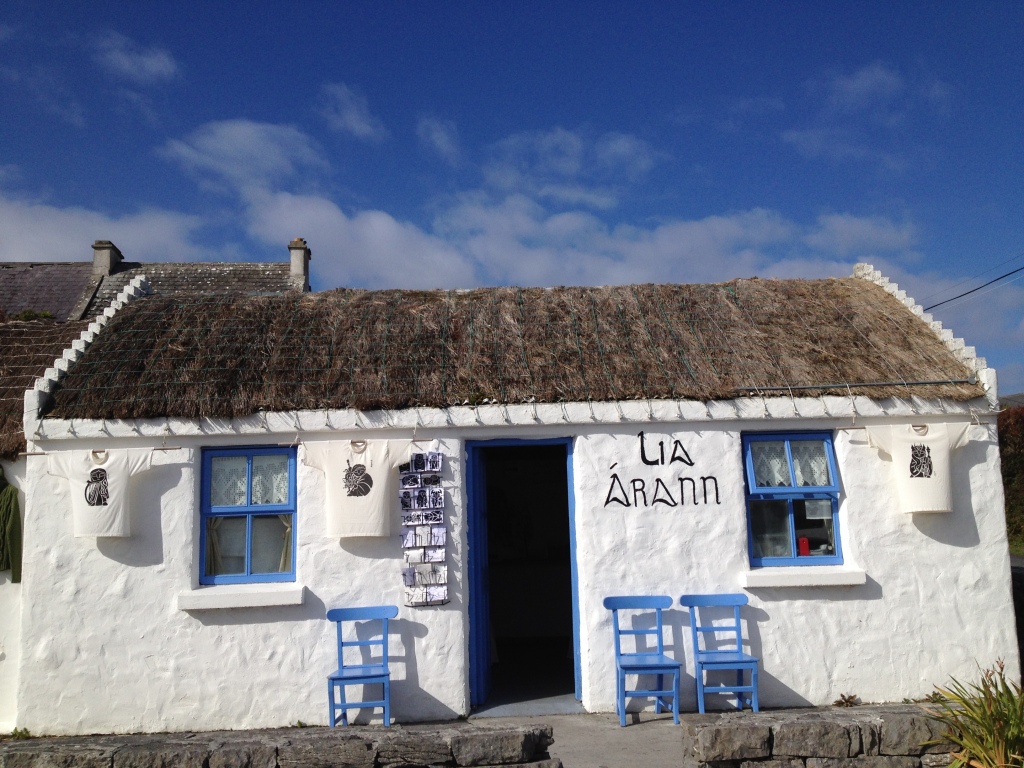 Make a long weekend of it. There’s plenty to see in and around Galway. I had fantastic day trip to the hauntingly beautiful Aran Islands. Day trip with Aran Island Ferries including coach transfer to the ferry terminal from Galway city centre costs €32. 10% discount applies if you book online.

In terms of getting to Galway, I flew into Dublin Airport and then hopped onto the GoBus  service from the airport to Galway. Fares are €17 single or €25 return. Journey time is 2 hours and 30 minutes and there’s a bus every hour.

I flew out from Knock Airport which is just an hour from Galway. Bus Éireann offer a direct service and it costs around €7. 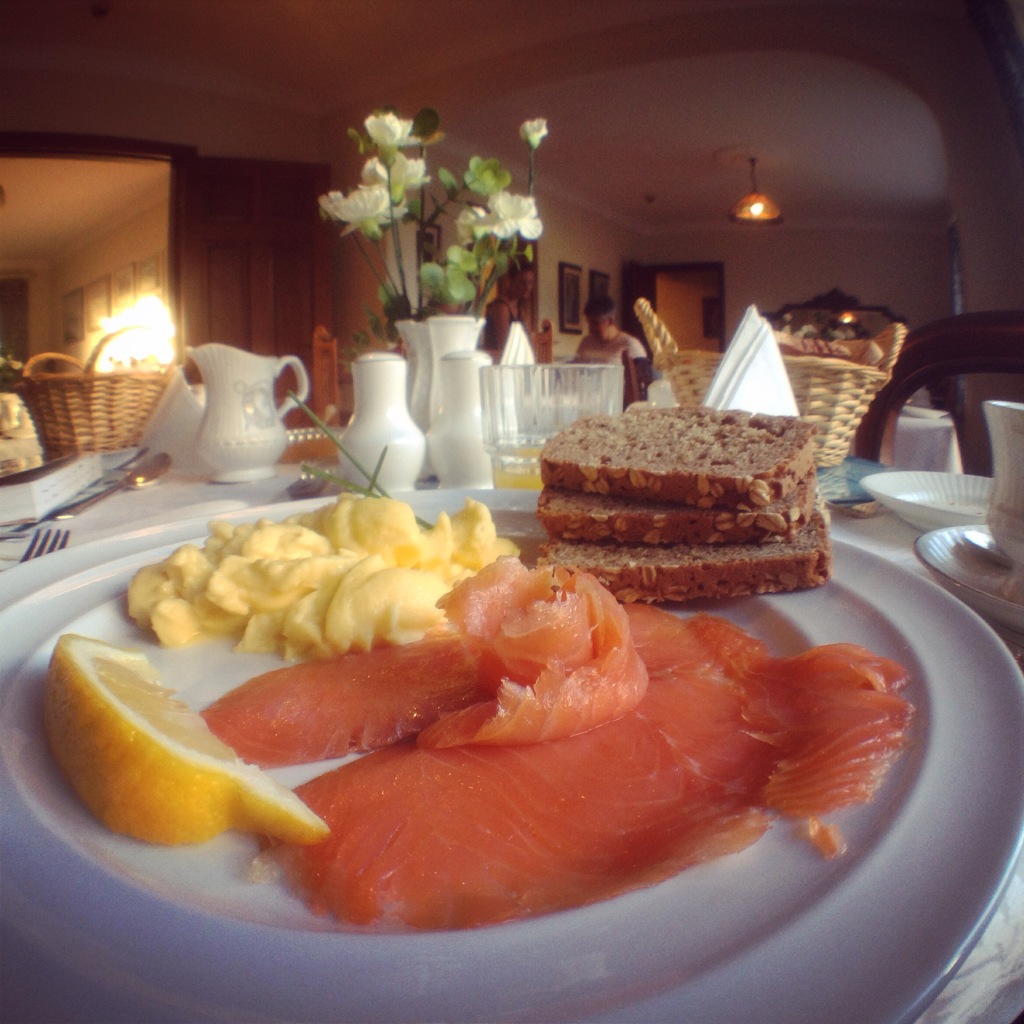 Starting my day in Galway with this true taste of Irish hospitality at my B&B, Ardawn House. Smoked salmon sourced from local Galway fishmonger, homemade soda bread ( could just eat a whole loaf of this!) with scrambled eggs.

I stayed at the Ardawn House, a cosy B&B about 15 minute walk from the city centre and just 5 minutes from the main bus station. Owners Breda and Mike are very hospitable and friendly. Lots of great tips – a wealth of knowledge about the area and connected me with some very interesting people. Rooms are clean and comfortable. Wifi is excellent and they prepare a fantastic Irish breakfast with locally sourced ingredients and homemade sodabread. Rooms are around the €85 for a double room, per night via Booking.com

I visited the festival as part of the Must Love Festivals project, a collaborative blogging project aimed at raising awareness of cool, lesser known festivals across Europe.  Many thanks to Tourism Ireland  for supporting my trip and the Must Love Festivals project. Plus thanks to Galway Oyster Festival for the invite and to Ardawn House for hosting me

Belated Happy New Year from the BudgetTraveller! I hope you had a nice break from work like me and 2015 has been good to…