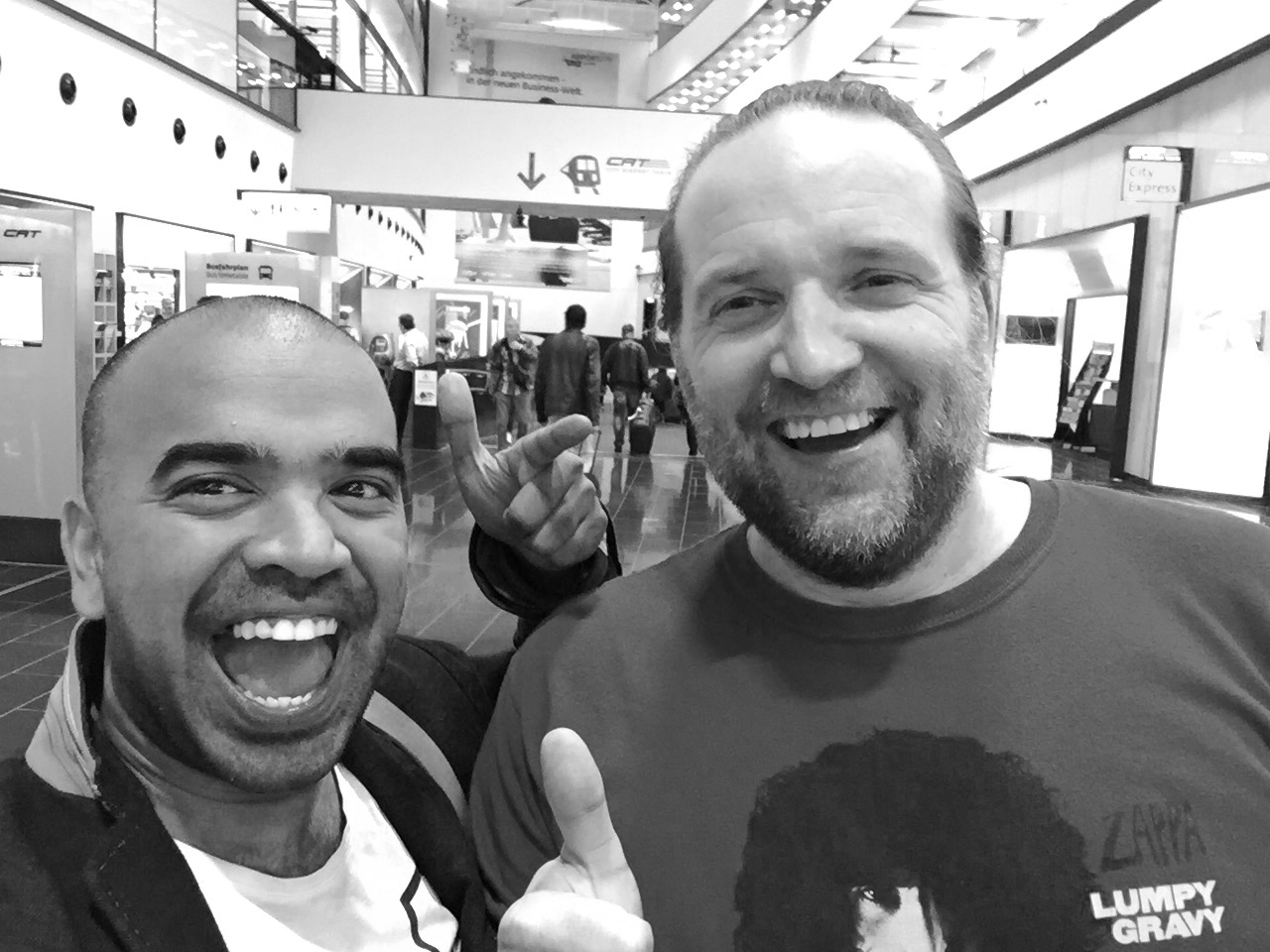 That’s a picture of me and Gunter at Vienna airport.

I don’t know his surname or what his favourite colour is but I can tell you this much: he is the nicest, the best taxi driver you will find in Vienna and maybe Austria.

I met Gunter on a cold, wet and unforgettable evening in September.

I had been flying to Vienna from Malta enroute to Prague.

The flight had been delayed thanks to a hurricane in Malta.

‘It never rains in Gozo or Malta. It is always sunny and bright!’

I was reliably informed by my anon Gozitan taxi driver as we left the apartment for Malta Luqa airport. I was sad to leave. We spoke all things Gozitan till boarding the cruise ferry to Malta. We marvelled about everything: from their delicious soft goats cheese to the dreamy beauty of their idyllic mediterranean coastine.

30 minutes later, as the car rolled out of the belly of the ferry he retracted his earlier statement and released a modified version.

‘We have one big storm every year in Malta. Otherwise, it is always sunny and bright’  he tried to reassure me, as our cab ventured forth, into a gaping hole of infinite darkness.

Just minutes before, the sun was blazing. Piercing, blue skies with not a speck of a cloud in sight.

In a matter of minutes, the sky turned from cobalt blue to slate grey to charcoal black.The storm picked up quickly. Spinning long yarns of dust and rusty autumn leaves, a lusty wind snarled, swirled ominously around our car. Then came a few rip-roaring bursts of lightening followed by a deluge of water. Rain, rain like I have never seen rain before. We slipped , slided through vertical columns of water for a few nervous minutes. Almost zero visibility. Then like a saintly apparition, Malta Luqa airport came into view. I wished my anonymous taxi driver the best of luck and gave him a generous tip. I silently muttered a prayer in his anonymous name as his neon cab sign faded into the misty distance.

The Air Malta ladies at the check-in desk were smiling happily as I arrived bedraggled, water dripping from my forehead. If memory serves me right, on miserable dreich days like this in Scotland, grown women weep and rage.

‘It makes us so happy when the rains come. We never get rain you see!’ my happy, smiley check-in girl explained to me, as I asked her what was the secret behind her smile.

Then she hastily added, ‘ Oh. Btw. Your flight has been delayed by an hour.’  and then handed over my boarding pass which I nervously accepted.

I had left a 2 hour buffer between my flight landing in Vienna and my Student Agency Bus departure to Prague.

I waited at the announced gate of departure. Raised my head every 2 minutes for the next hour looking at the monitor.  In between, I pushed my face against the perspiring windows, peering through the incessant bands of rain, wondering when my Air Malta flight to arrive.

Flight was not too bumpy. I touched down in Vienna just 15 minutes before my bus departure. I nervously waited at the luggage carousel, hoping my luggage would arrive on time. For once, I pray to thee Lord of luggage and conveyor belts, please deliver my rucksack before everyone’s luggage. But hell no. It arrived promptly at 7pm in the oversized luggage carousel. It’s time to start using a suitcase like normal people.

It was the last bus to Prague.

The sensible thing to do at this point would have been to take it easy. Find a cheap bed for the night and take the first bus tomorrow to Vienna.

But guess what. This Kash, BudgetTraveller dude is an obstinate, stubborn mule. He has missed two flights this year and is in no mood to miss another connection. Moment he got the backpack, he ran like nuts to the bus terminal.

Picture this. An Asian (almost skinhead) guy with beard and a black backpack running through a crowded air terminal. You can imagine how many people were staring at me with a very concerned look.

The bus had left a matter of 8 minutes ago but there was mass of taxis swelling the rank.

Suddenly I had this madcap idea of hopping on a cab and catching the Student Agency Bus at the bus station in Prague where in roughly 25 minutes it would be picking up a few more passengers.

I hopped in with no second thought into the first cab on the rank. That’s when, I met Gunter.

After exchanging brief pleasantries I tried to explain to him where I was going.

‘City Centre. Schon cool. That will be €30’  he grunted to him in the strongest Austrian accent you can imagine.

Yikes. My bus ticket to Prague costed me €25.

He hadn’t heard of the bus station ( Florenc) from where the Student Agency Bus left from. I mentioned it to him a few times. Maybe it was my pronunciation? He kept on shaking his head.

Looking at his perplexed look, a nauseating feeling sweeps over me.

That feeling in life when circumstance smacks you in the face. Yet still, you feel numb, that slightly surreal out of body sensation that you can’t believe that THIS SOMETIMES AMAZING, SOMETIMES CRAZY THING CALLED LIFE is happening to you.

Again. Misadventure was my best friend.

Gunter puts on his reading glasses and manages to fish out his dinky little phone.

After an animated discussion that lasted 5 minutes but feels like an eternity, Gunter puts his phone down and nods his head reassuringly.

As one wave of panic subsided, another nagging issue reared its head.

I had zero cash in my wallet.

I was doubtful that his card machine would accept my Portuguese bankcard.

The tension levels rising, we rolled into the dark wet empty streets of the city. Vienna was like this abandoned ghost town from a zombie movie. All lit up and pretty, but not a soul in sight. Gunter was prodding away at his GPS, uttering numerous profanities at it , trying to figure out the best route to the bus station.

The traffic lights were conspiring against me, turning red at every street we turned into.

Finally, with just 2 minutes to spare we rolled into the bus station to see the familiar bright yellow outer shell of the Student Agency Bus.

Thankfully, there was a huge queue still waiting to board the bus.

Gunter parks the car behind the coach and then looks at me with a big smile on his face.

I have a crocodile smile as I fish out my bankcard.

‘I zoo not think my machine will accept zees card.’

He tries it thrice but somehow the machine will just not play along.

I feel a few more knots in my chest now, my breath heavy as I see in front of me the bus queue thinning out.

Gunter then waves his hand at some of the people waiting in the crowd and hollers to them, asking them if they knew where the nearest cash machine was.

One of them yanks their head towards the waiting hall of the bus station which is about 500 yards away.

Then without much explaining, both me and Gunter leap out of the car and make a mad dash to find this cash machine.

After a few wrong turns we finally find the machine and I gleefully pop my card in, only to read the message at the ATM

Blood drains from my face. Gunter, panting for breath, shakes his head.

Game over. Fate seemed to be conspiring against me today.

In the distance, I can the luggage door of the bus closing. The last remaining passengers are about to board the bus. I look towards Gunter.

I can’t remember the exact words of what I said to him then. It’s a bit of a blur.

‘I know Gunter we’ve just met. But I really need to get on this bus. Otherwise I have to spend the night here which will be bloody expensive. I have to buy a new bus ticket tomorrow morning. I know we’ve just met but I am going to be back in Vienna in 4 days time. If it’s ok with you I can pay you the money then. I’ll add an extra 10 euros for your hassle.’

Then an uncomfortable pause as I analyse Gunter’s face for his reaction.

Then the impossible happened. He nodded his head simply.

‘It’s cool. I accept this solution and trust you. Give me zee name of your hotel and we can meet there.’

I look at him. Biggest smile you can imagine. I give him the name of my hotel and we exchange phone numbers. I board the bus and give him a big huge wave to my newest friend on planet earth.

I am back in Vienna to attend the Wiener Wiesn Festival.

As promised, I call Gunter. He’s happy to hear from me.

We meet at the airport where he works from. We embrace like long lost friends.

Gunter tells me that he wasn’t sure if I was going to show up but was happy to hear my voice when I called him.

I gave Gunter the extra €10 tip I had promised which he would not accept. He told me to call him , the next time I was in Vienna and buy him a beer.

Which I happily agreed to.

If my faith in humanity was wavering, Gunter restored it.

Things have changed since we were kids.

They tell me that fairytales exist no more.

Well. They are wrong. Fairytales DO exist. Thanks to the invisible knights in shining armour. Call them angels or kindred spirits. They exist in this world. We just don’t see them.

Like the anonymous taxi driver who you meet at the airports of this world. Like my anon Gozitan taxi driver or indeed Gunter.

Definitely, the nicest, the best taxi driver you will meet in Vienna and maybe Austria.

Enjoyed this story? For more ‘Stories from the Road’ hop over here.

It’s been 18 months since I blogged about my painful experience of being robbed in Barcelona. While the experience was bruising it…