Angela and Paul of MyPostcardFrom joined up with BudgetTraveller and Visit Wales to spend a weekend exploring the town of Brecon in South Wales and its surrounding area. Here’s what they got up to.

Green trees, green fields and green hills. This was our view for the final hour of our Friday night drive along quiet country roads to Brecon in South Wales.

Our hosts for the weekend were Marc and Tony, the two owners of the Coach House; a small contemporary townhouse that used to be a 19th century coaching inn. Their Welsh rarebit is worth the £99 per night cost alone. Marc was also a great source of information as to what to do in the area.

And that was the theme of our visit to this part of Wales.

Earlier in the week we’d asked fans of Visit Wales to give us tips and advice on what to see and do in Brecon on their Facebook page. We were given plenty of ideas and coupled with a few from Marc we set out to explore Brecon and the surrounding area. 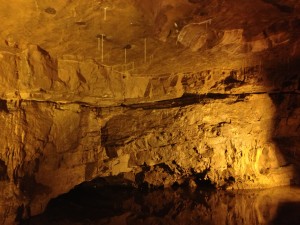 Around a twenty-minute drive from Brecon along the western side of the Brecon Beacons National Park sit the natural wonder of the showcaves. The £13.75 entrance fee gives access to ten attractions with the main focus being the caves themselves.

There are three caves that have been discovered that are open to the public, Dan-yr-Ogof, Cathedral and Bone caves.

Dan-yr-Ogof is full of weird and wonderful stalagmites and stalactites shaped like angels and bizarrely, bacon. Discovered in 1912 by two brothers the audio commentary played out throughout the walk explains how they ventured into the unknown.

Whilst Dan-yr-Ogof was the most interesting, Cathedral cave was definitely the most impressive. Though smaller in length the tall ceilings and the deafening sound of water crashing into the pools below gave it that little edge.

Bone cave was the last cave on the trail and can only be reached by donning a hard hat and crouching through the tiny entrance. So named due to the 42 human skeletons that have been found inside, there are displays charting the history of the cave from its original inhabitants from the Bronze Age.

Other features of the park include the numerous life-size dinosaur models, museum and mini-farm where we walked amongst sheep, llamas and ostriches.

There’s also a caravan and campsite if you want to pitch your tent and wake up to a smiling alpaca. 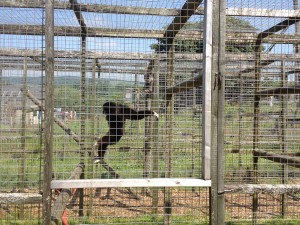 When we’d mentioned to Marc that we were visiting the caves he suggested we continued our journey south for a few miles to the Wales Ape & Monkey Sanctuary.

Giving a home to several rescued chimpanzees, gibbons and smaller primates each enclosure brought tales of an unhappy life prior to being brought to the sanctuary.

Not all were treated badly though and our favourite story came from Sinbad, a Macaque monkey that stowed away on a Maersk cargo ship on its way from Malaysia to the UK. On being discovered whilst hunting for food in the ship’s mess the crew captured their additional passenger and arrangements were made to transfer him to the sanctuary when the ship docked in Felixstowe.

Whilst it was sad to see some of the monkeys showing visual signs of a poor life the £6.50 entrance fee goes towards food and care for them for the remainder of their lives. 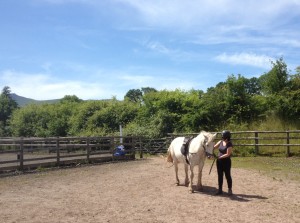 On Sunday morning we made the 10 minute drive from Brecon to the Cantref Riding Centre. Part of an adventure farm with slides, trampolines and petting zoo the riding centre has treks lasting from a few hours to half a day.

We’ve little experience in the saddle but we had been looking forward to the ride and seeing the green hills of the Brecon Beacons National Park from a different vantage point.

Donning our fetching riding boots and helmets we mounted our steeds for our two-hour journey. I was partnered with Big Ben, one of the larger horses that left me wondering how on earth was I going to get on him. Angie was given the pleasure of riding Tom, a calm and relaxed horse that spent the entire trek at the rear of the line.

The trip was half road riding and half crossing through fields of long grass, that the horses took every opportunity to munch on, and onto the slight slope of the hills.

Ducking for branches and dodging sheep became a bit of a game and by the end of the trek the whole group had scratched to remember the day by.

Though at £32 per person it may seem a little expensive if your travelling on a budget it does offer great value for money. Overall we spent around three hours in the stables and out riding and even though all we had to do was sit back and enjoy the ride it left us feeling exhausted and well exercised even if we were a little saddle sore for the next few days.

If you’re looking for more ideas for short breaks in Wales, the Visit Wales website has loads of great suggestions for what to see and do.

Our weekend in Brecon was provided by Visit Wales, however as always our views are completely our own.

By Kate Bailward    So, now you know what to ask for – where to go? There’s a great selection of places and even the…