I came to Parma on a stifling hot day in July.

No one in their right mind would recommend you visiting Parma at this time of the year. Temperatures were around the 35c mark. However, I don’t mind the heat.

Forget the heat. Parma strangely does not figure prominently in many popular travel guidebooks. Which explains why the city was completely devoid of tourists when I visited, even at the major landmarks. While it lacks the attractions of the “big three” of Venice, Florence, and Rome, Parma is a microcosm of everything beautiful about Italy and definitely worth a day trip. 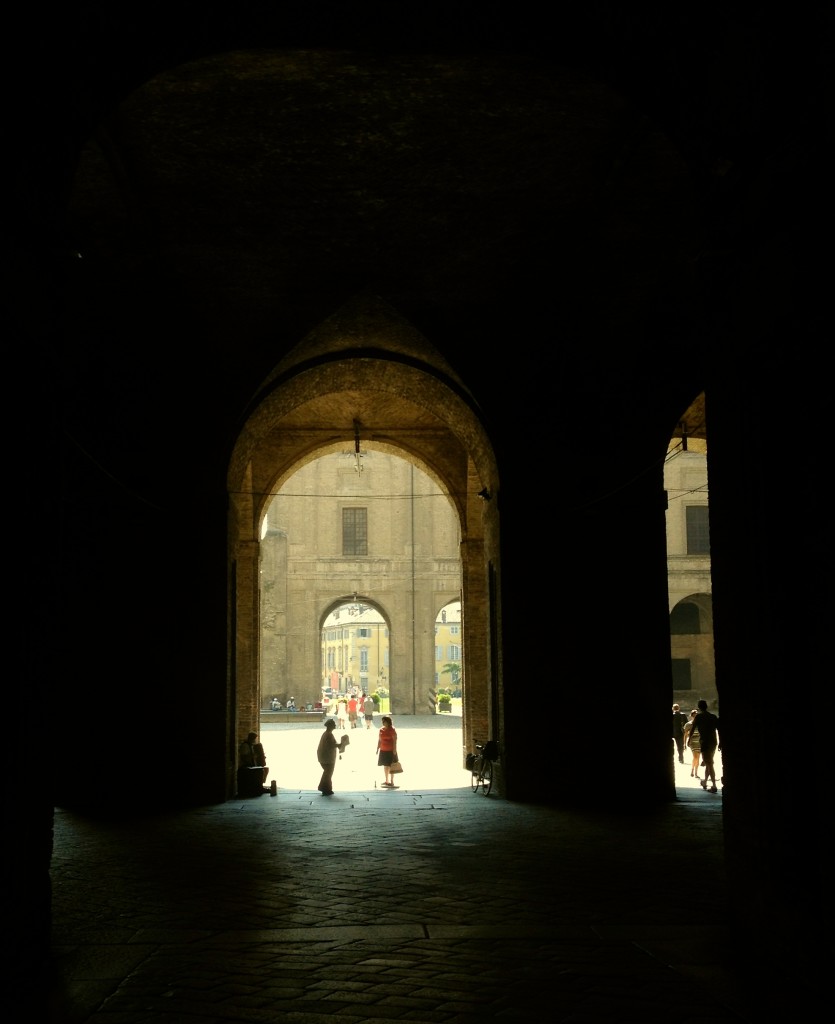 Amazing fact: This is the town that the Italian flag, or il Tricolore, was first adopted. 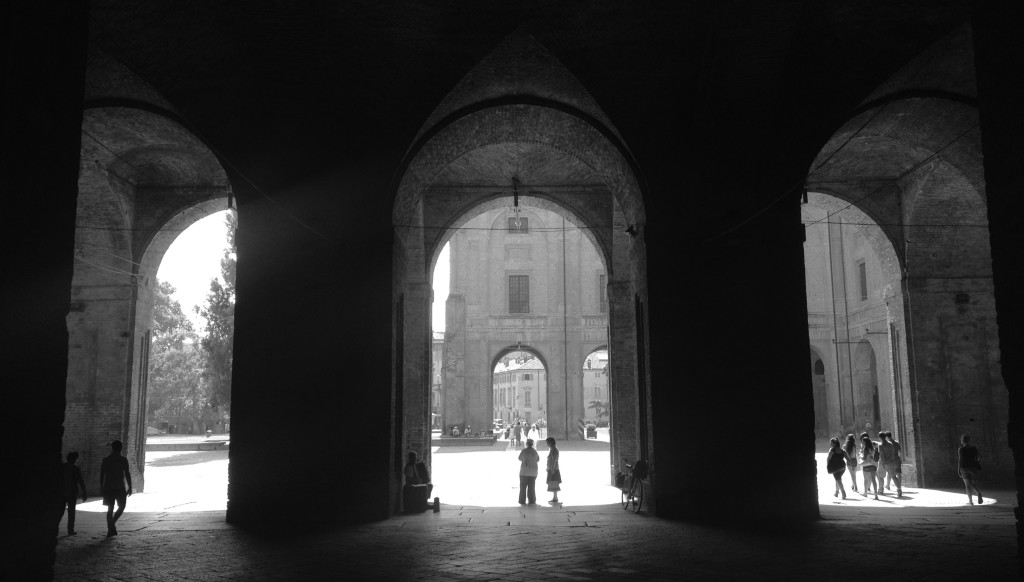 It’s an easy walk from Stazione di Parma to the historic city centre. I enter the city through the colossal, fortresslike Palazzo della Pilotta. Despite being heavily bombed by the Allied forces in WW2, the structure has managed to retain a beautiful grandeur.

I spent a good half hour just walking under its complex network of arches. 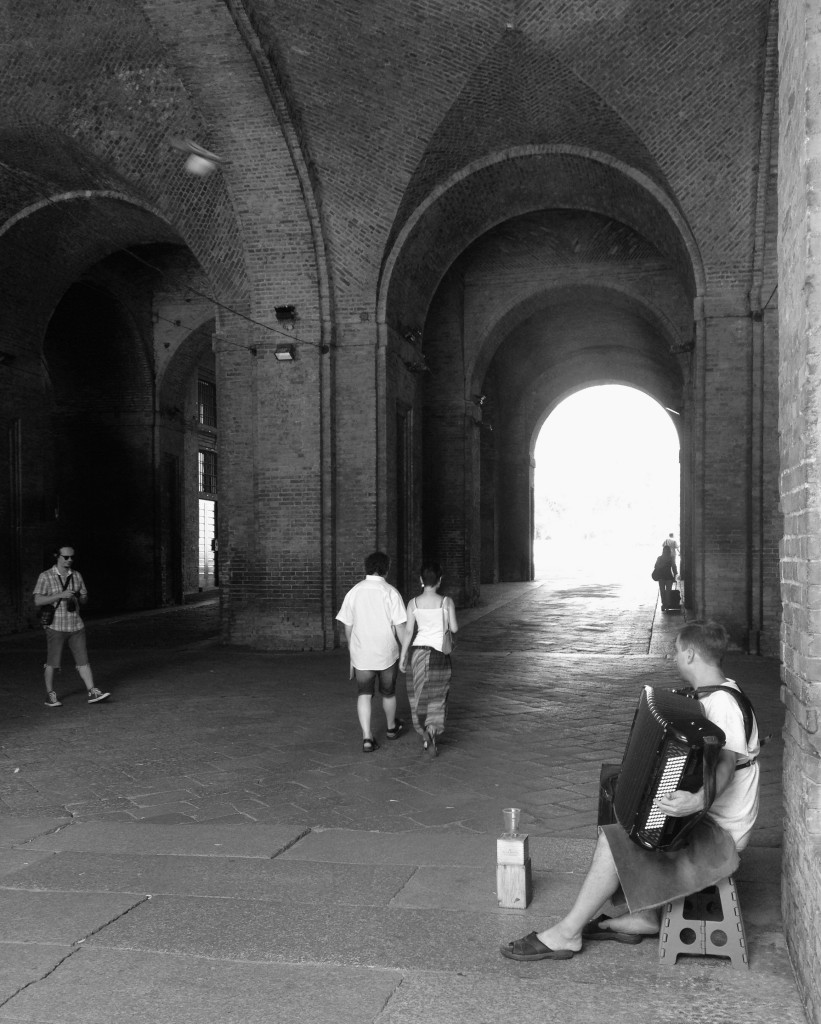 The palazzo was supposedly named after the Spanish game ‘pelotta.’ No one was playing the game on the day I visited but there was a fantastic organ player busking under the century old arches. I casually observe the passage of locals while listening to the melancholy strains of the organ, the soft cooing of the pigeons above and the gentle echo of people’s footsteps passing by….

Here’s a sample of his work.

listen to ‘Organ player of Piazza della Pilotta’ on Audioboo

Originally built for the ruling Farnese family, the palazzo today houses two significant treasures- the art museum, the  Galleria Nazionale and the beautiful Teatro Farnese which you encounter enroute to the Galleria. 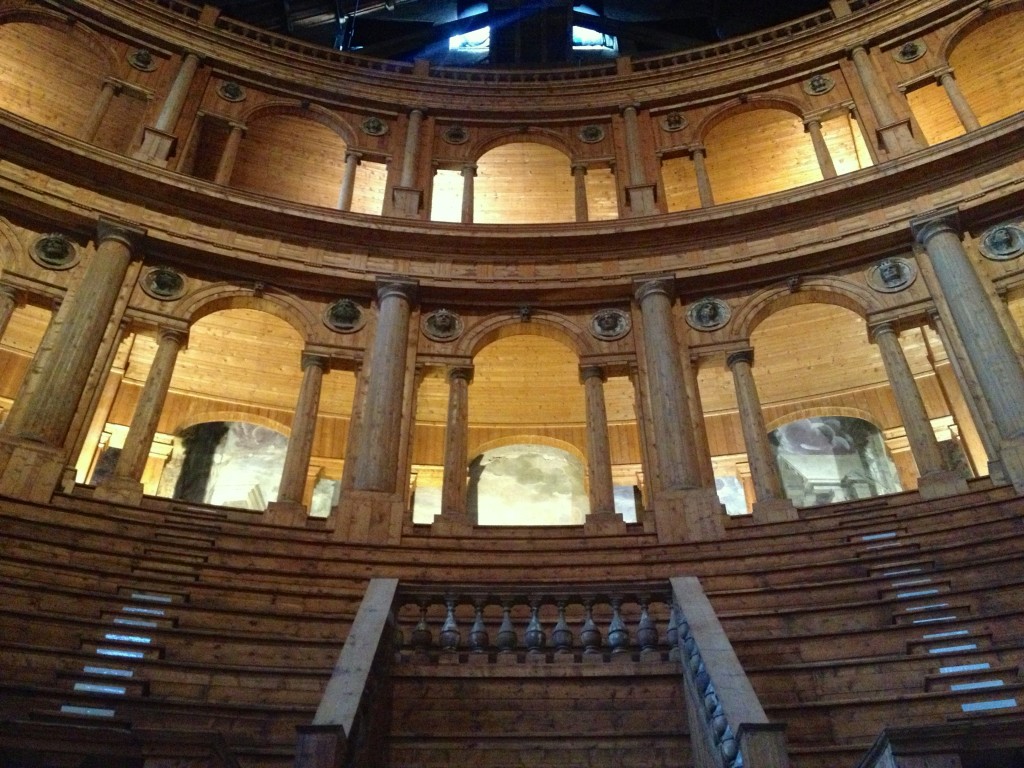 The theatre was built to commemorate the passing of Cosimo II de Medici through Parma enroute to Milan where he was visiting the tomb of San Carlo Borrome.

Since it was built in 1618 (entirely out of wood and plaster) , the theatre was used only 9 times, mainly to mark ducal marriages or important state visits. Since the last show in 1732, the theatre lied unused and fell into disrepair. It was still visited by many famous dignitaries including the writer, Charles Dickens who noted the poor state of the wonderful theatre in his book, ‘Picture from Italy.’ The decaying theatre was destroyed during the Allied forces bombardment of May 1944. It was rebuilt in 1956 according to it’s original design. It still remains a beautiful space and worthwhile visiting. 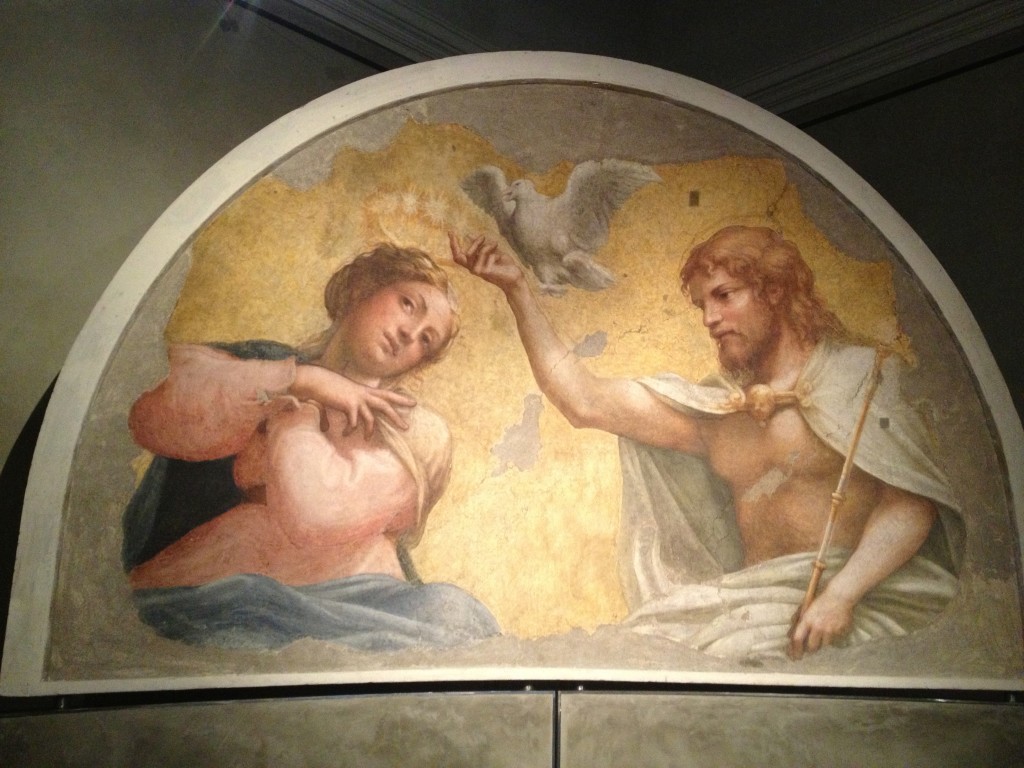 Corononation of the Virgin, Correggio

I also recommend visiting the Galleria Nazionale which houses some of Parma’s greatest art treasures- works by local artists like Parmigianino, Corregio plus paintings by Fra Angelico, Canaletto and El Greco.

Top tip: The combined ticket to both attractions is €6. However, if you go in after 3pm, entry is half price and a very reasonable €3.

My next stop is Parma Cathedal. ( € Free ) This 11th century cathedral is easily one of the most beautiful cathedrals I’ve visited anywhere in Europe. 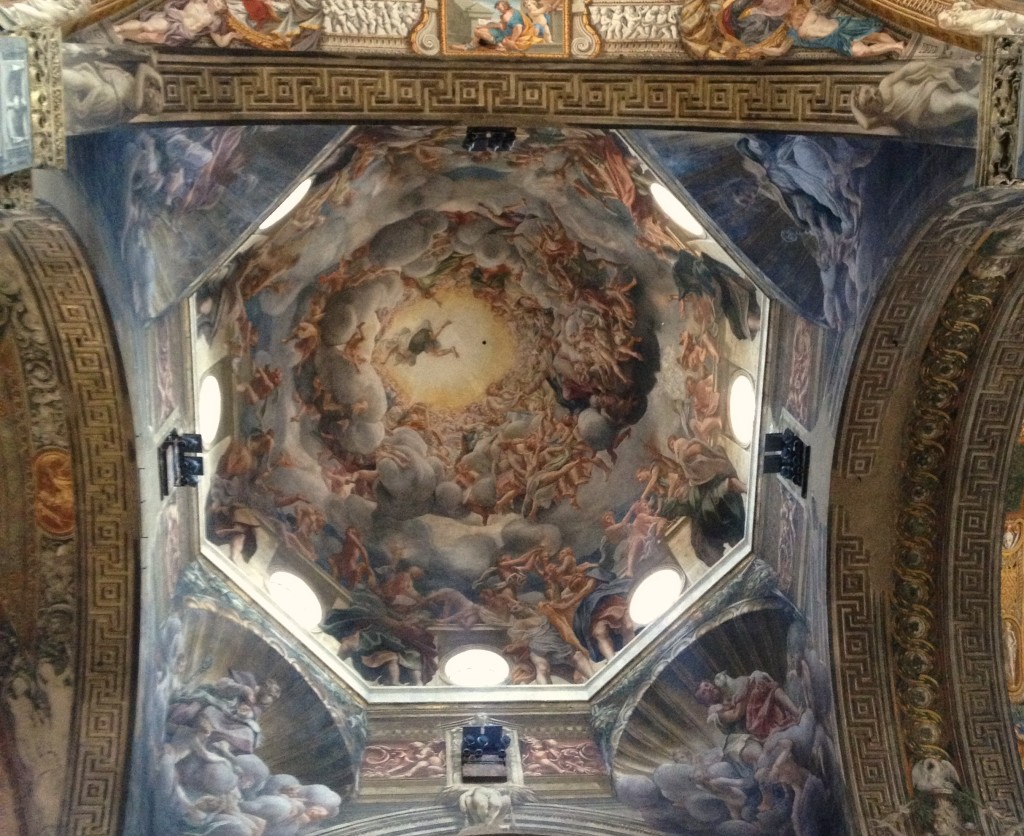 The walls of the duomo are painted with scenes from the bible . The cupola is decorated by the 16th century fresco ‘ The Assumption’ by Correggio. It depicts Mary ascending to heaven in a rather inelegant way, nightie tucked round her knees.

Next stop? I need lunch. 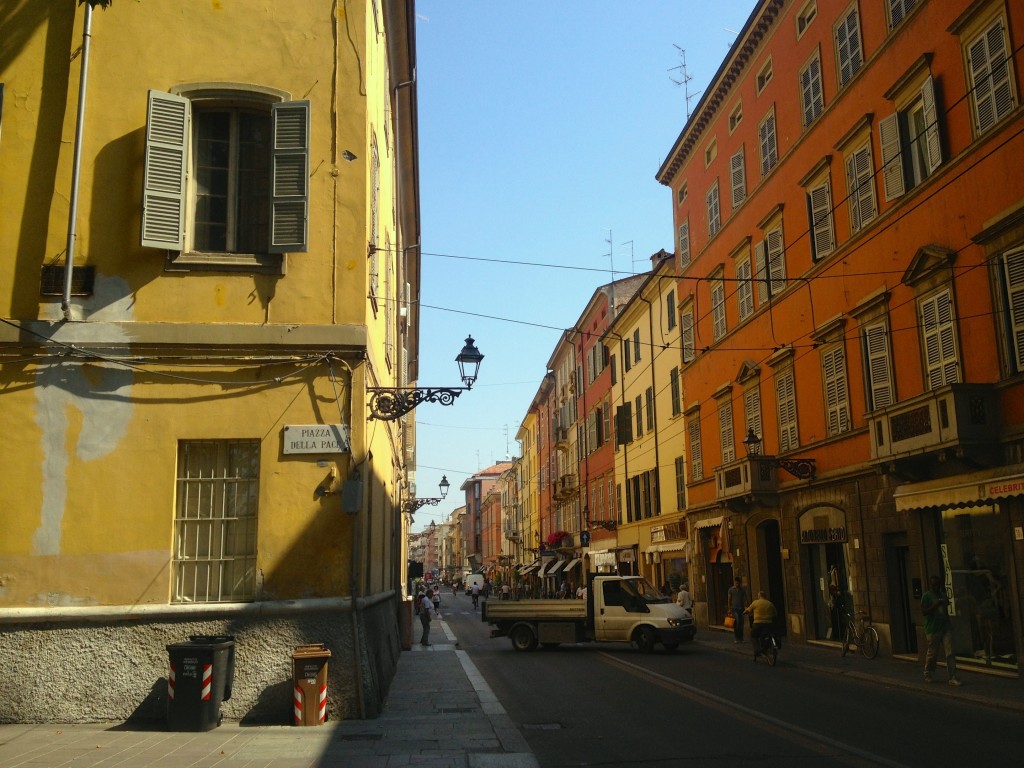 While in the search for lunch, I have a nice ramble around the streets of Parma observing the beautiful stucco houses in different , happy shades of yellow. 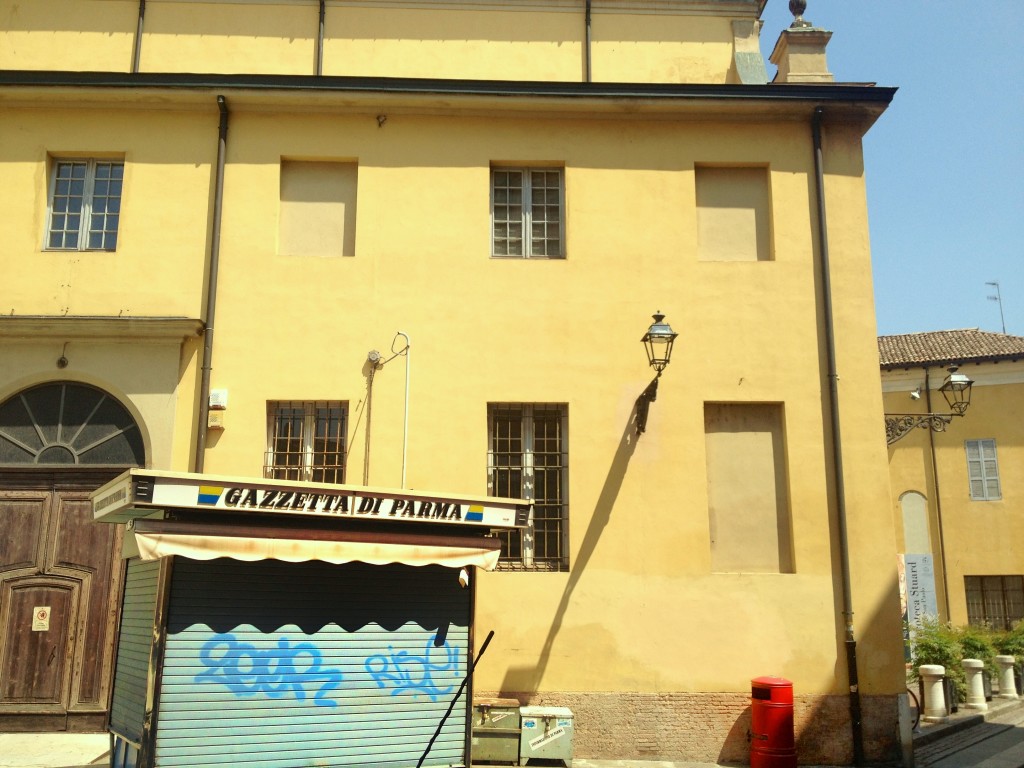 It is a very colourful city. 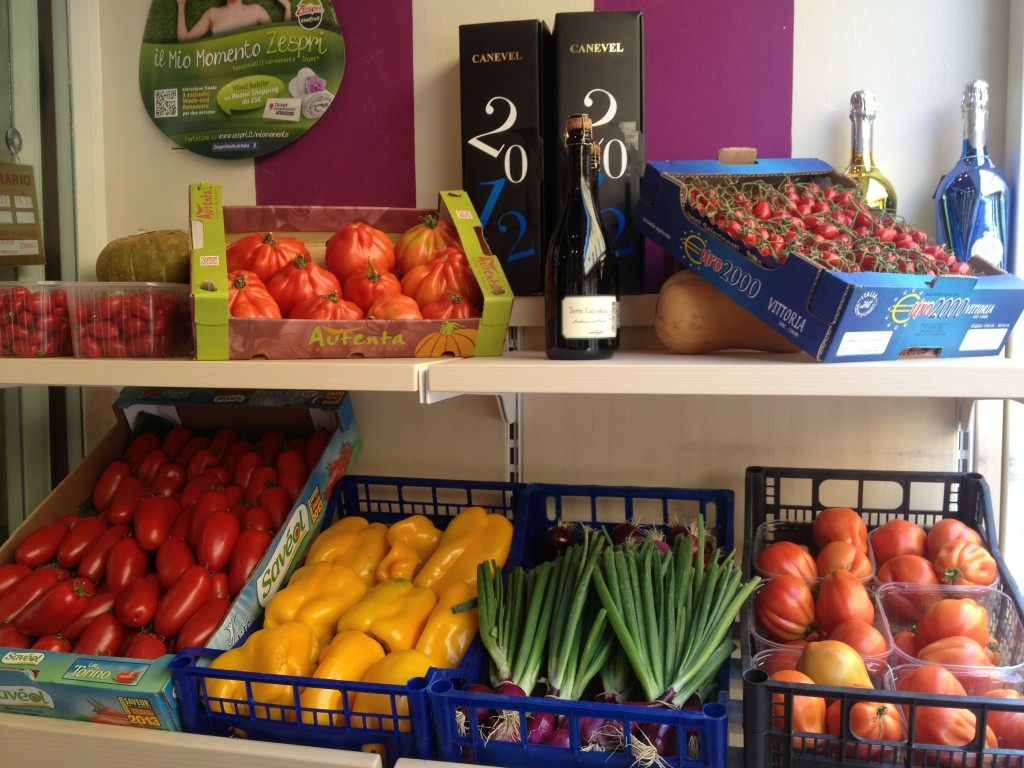 Even stepping into a humble vegetable shop, just looking at the colour of these beautiful vegetables and the way they are presented…..Life in Italy, imitates art.

I make a brief stop at the friendly tourist office to ask for lunch suggestions and they point me in the direction of Strada Farini, whose lively bars and restaurants make this a great place to come, for lunch or dinner or for just a drink. 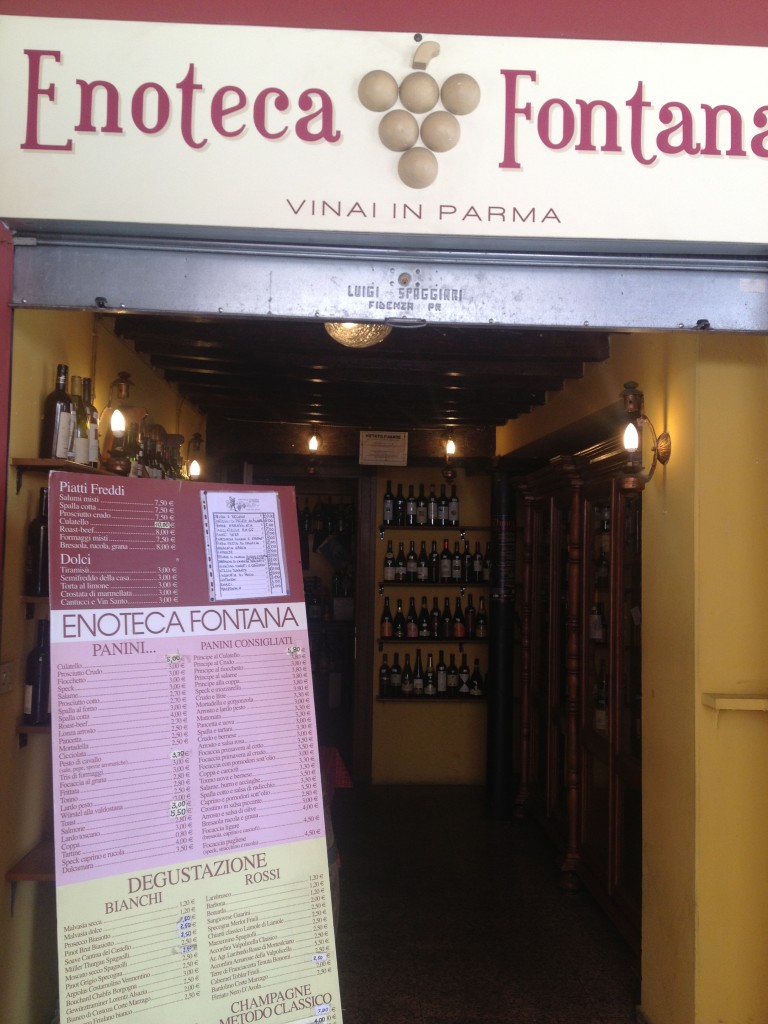 Enoteca for those not in the know, is used to describe a special type of local or regional wine shop in Italy that often serves small snacks with their wines. 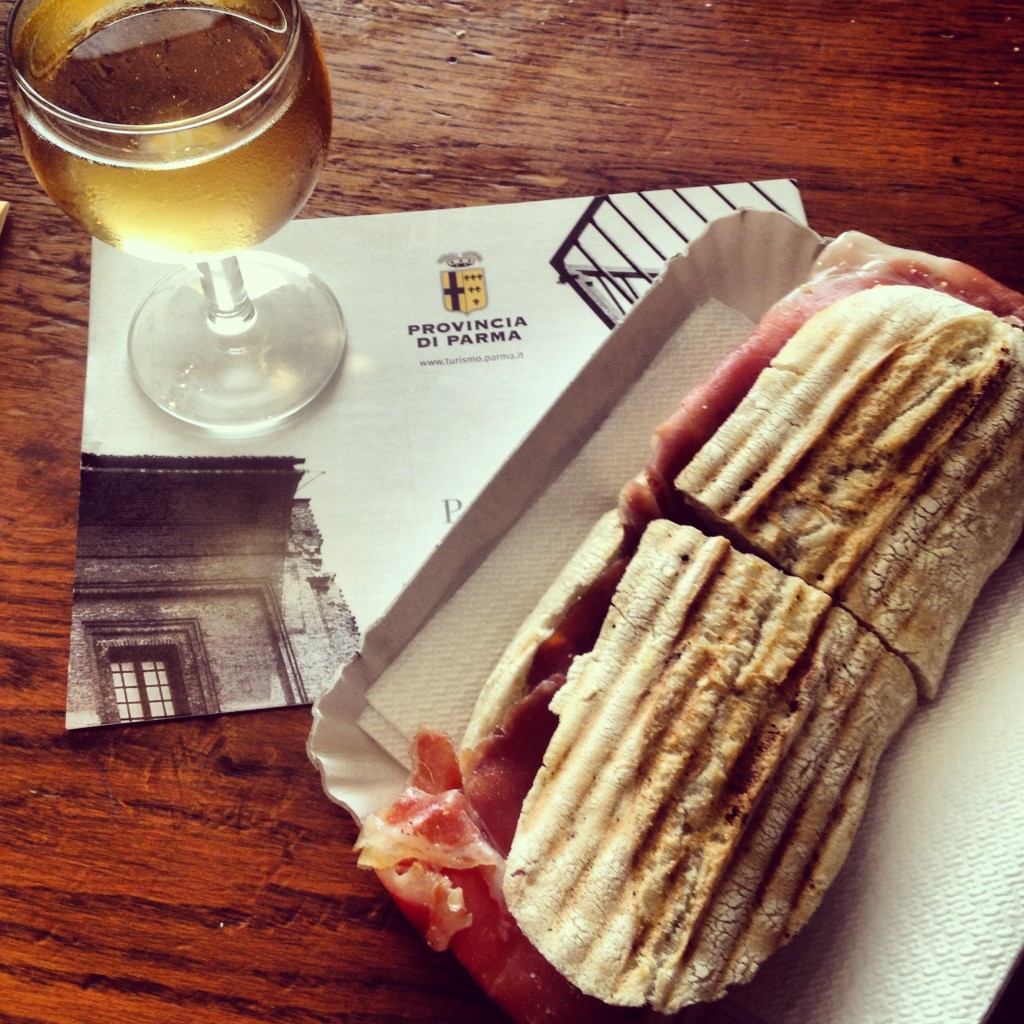 It’s a cosy place, packed with locals. Always a good sign. It has a great selection of local wines and tasty paninos. I enjoyed a panini stuffed with delicious local prosciutto crudo de parma ( €3 ) accompanied by a glass of the local sweet ‘Malvasia Dolce’ ( €1.20 ) 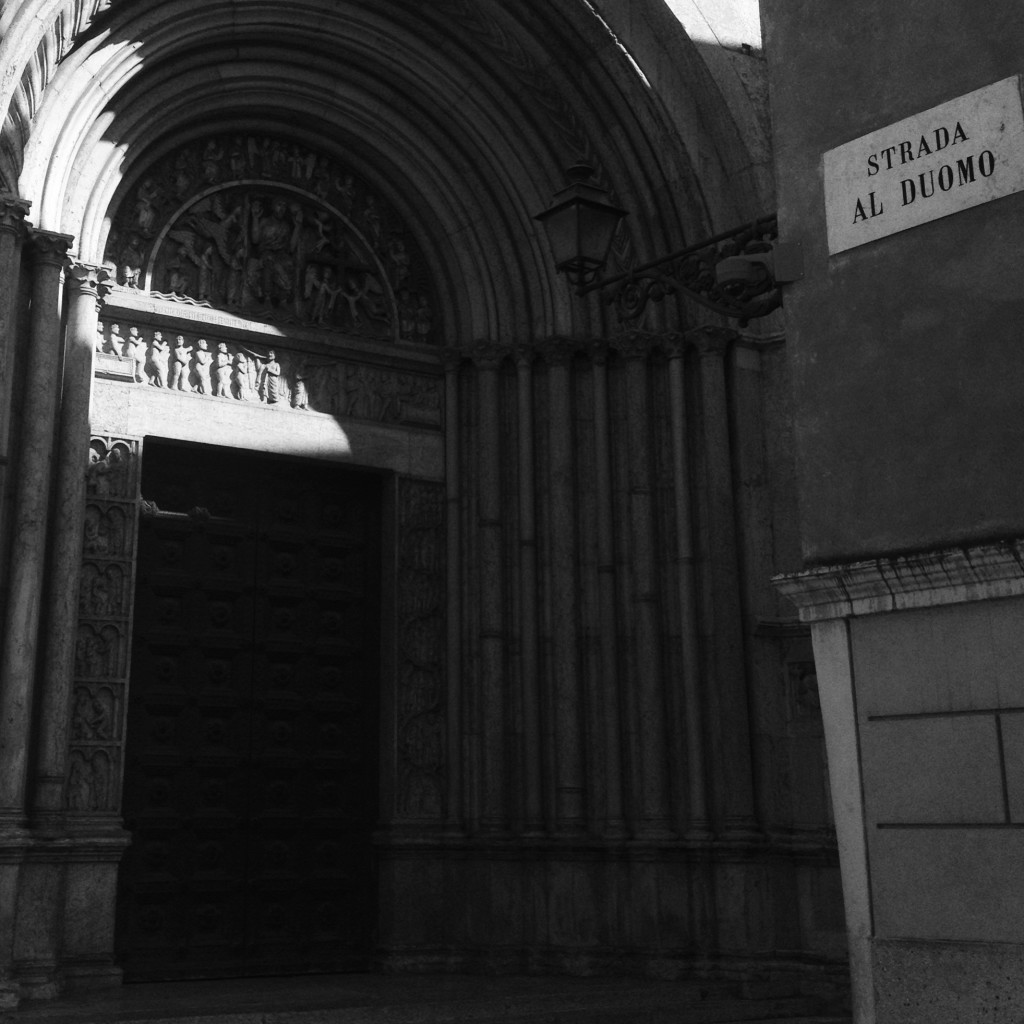 Fortified by my lunch I head next to the Baptistry,  a beautiful pink ( made from pink Veronese marble) and white octagonal building  built in the Romanesque style by Benedetto Antelami in 1196. 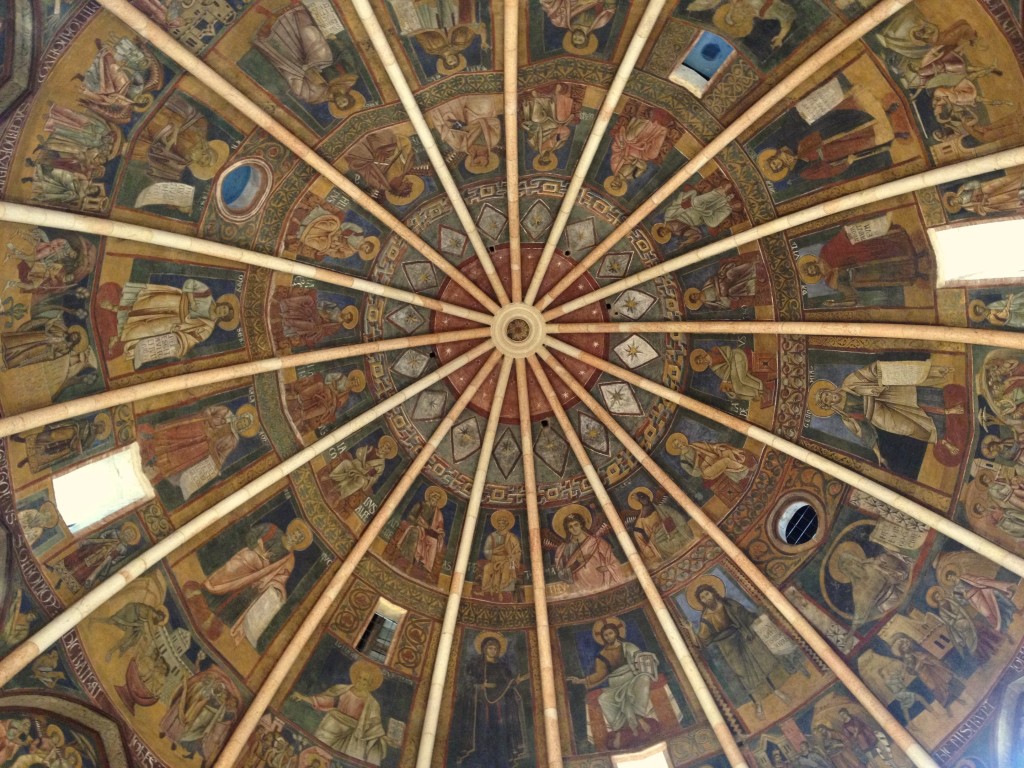 One of the highlights of the building is the beautiful dome covered with ranks of saints and angels. Inside, the walls are covered with scenes from the life of Christ. The downside of coming here is the entry fee of €6 which is a bit prohibitive.

It’s late in the afternoon by the time I come out of the Baptistry. The sun is still high in the sky. 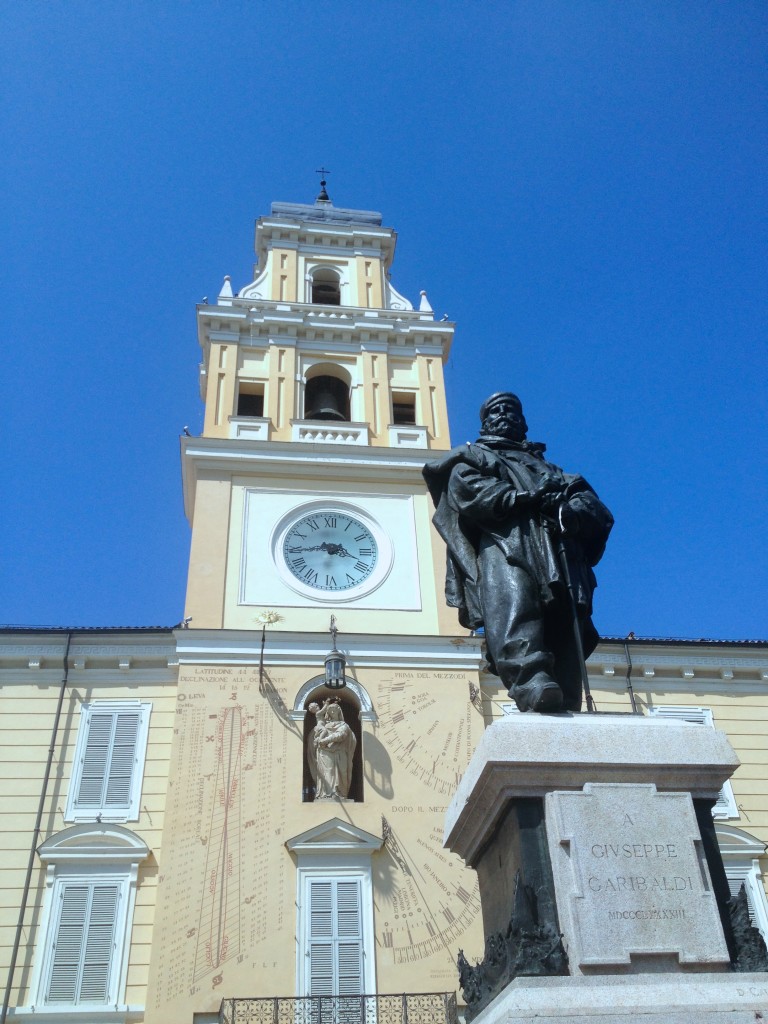 After another aimless wonder I find myself in the grand Piazza Garibaldi. Lurking behind the statue of Giuseppe Garibaldi himself,the Palazzo del Governatore towers in front of me. The facade dates from 1760 and has an impressive astronomical clock.

I cross the Ponte Dattaro. 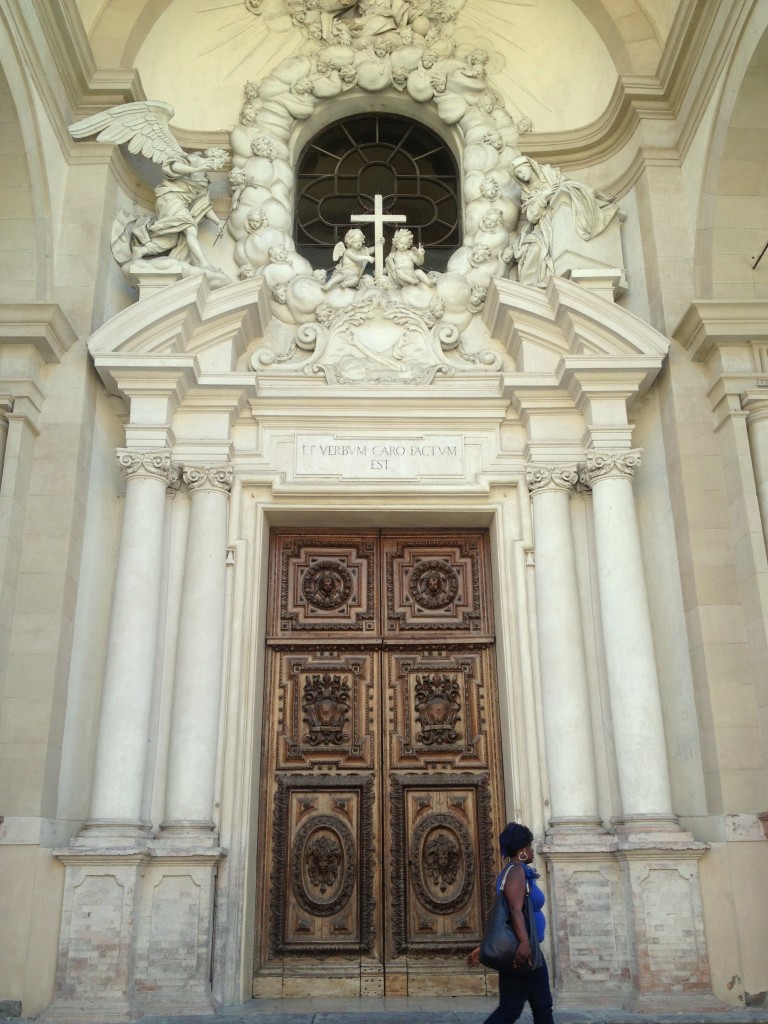 …which translates as …“And the word became flesh” . This is part of a Catholic prayer called the Angelus (it is said morning, noon, and night, to commemorate the incarnation of Christ) and also appears in the Gospel of John 1:14. 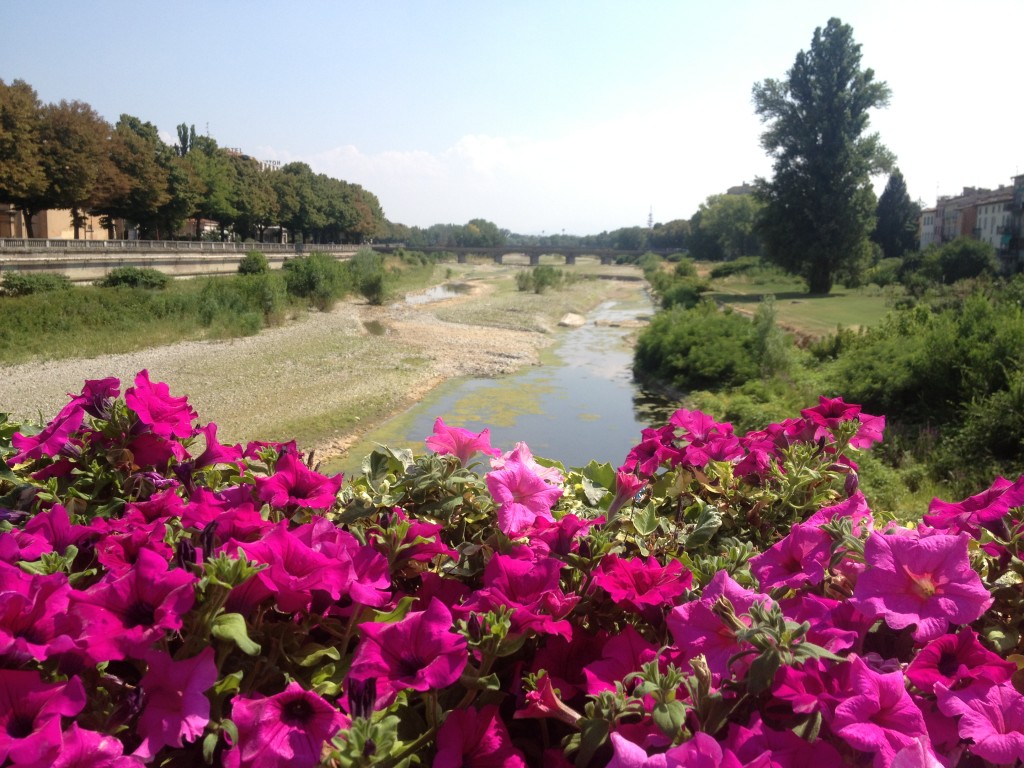 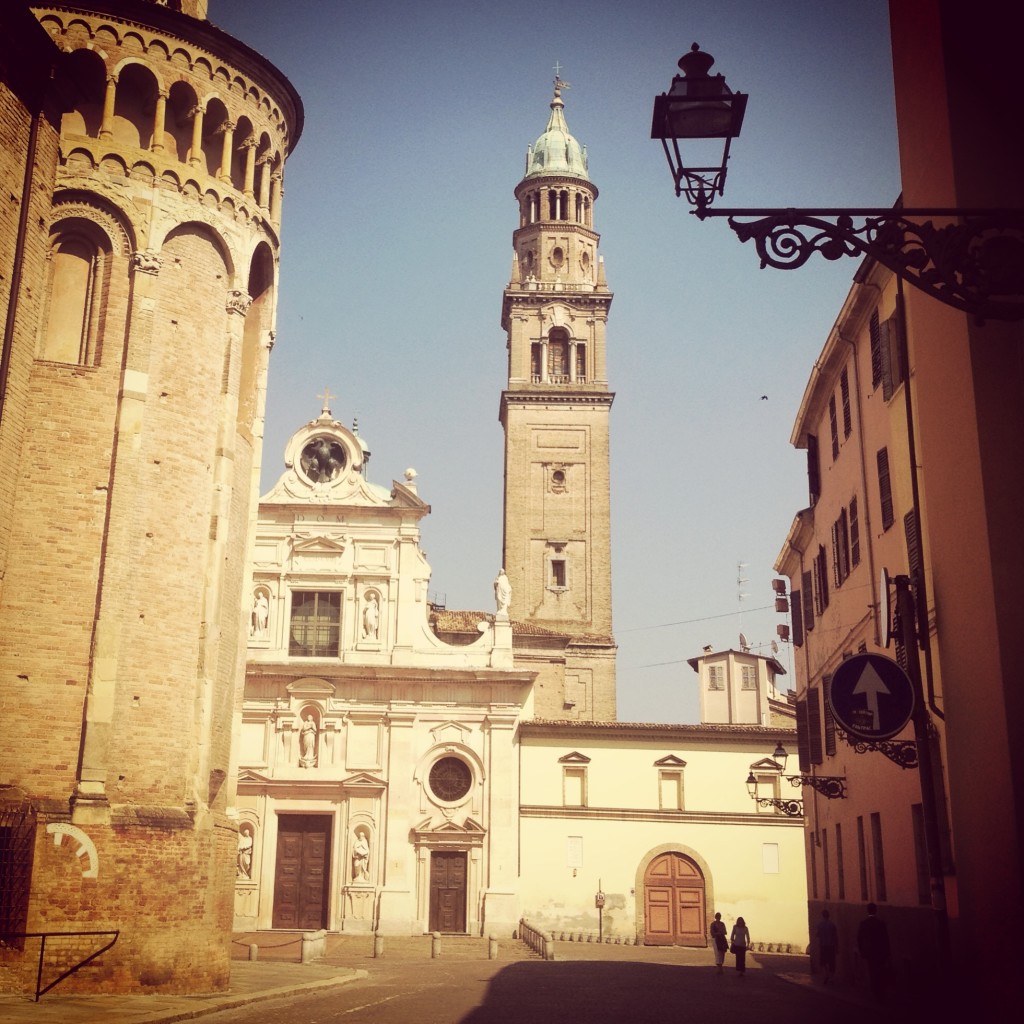 Back in the historic centre, I pop into the Chiesa di San Giovanni Evangelista. ( € Free)  Behind the 16th century facade, inside you can observe the magnificent frescoed dome by Correggio. 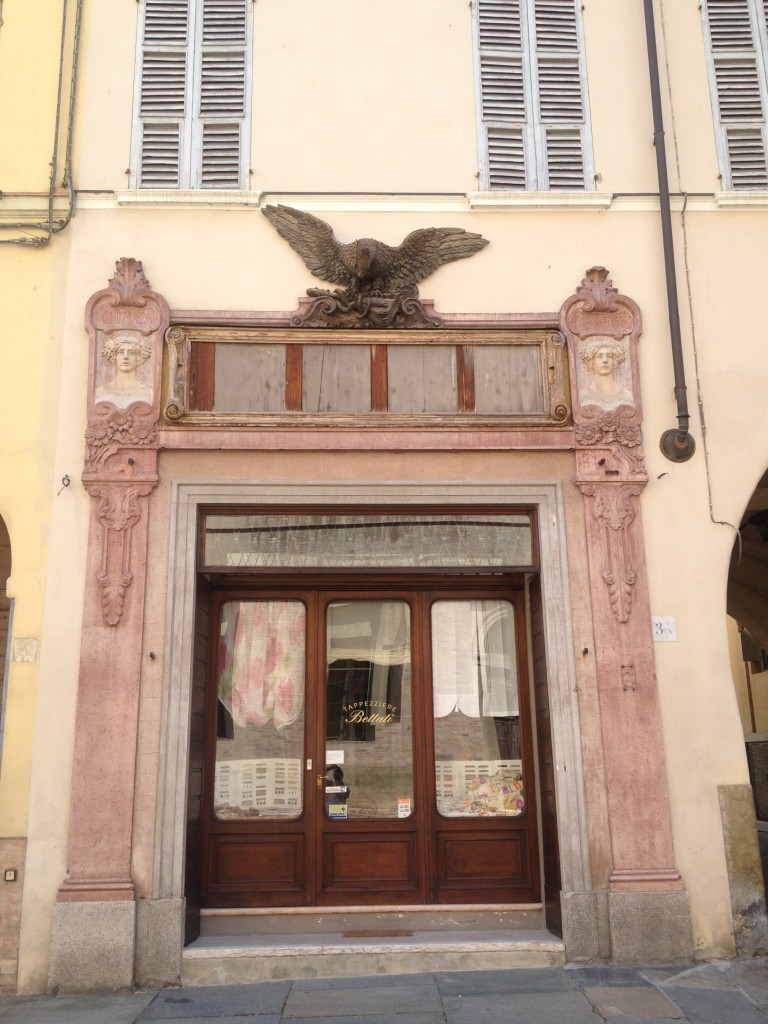 I loved the stylish shopfronts in Parma.  The facade of this shop/restuarant for example could be belong to the streets of Paris. 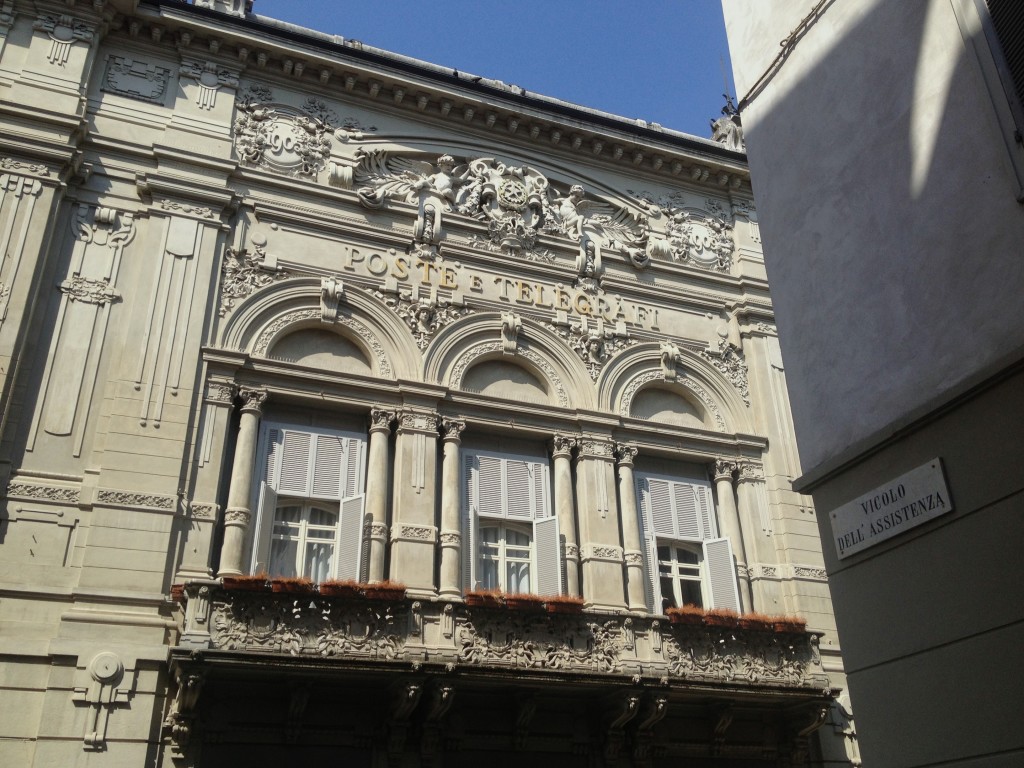 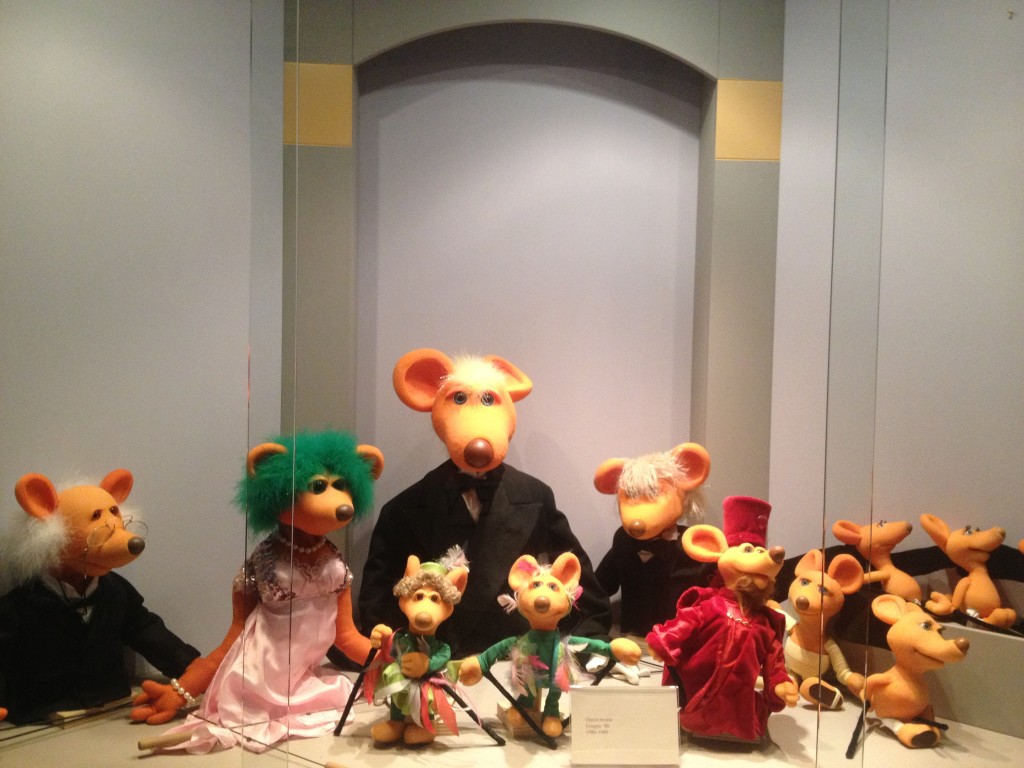 My aimless wonder brings me into a puppet museum-Il Castelo dei Burani. These are the characters from popular 80’s TV show- Opera Mouse by Gruppo 80. Italian friends recognise these faces? 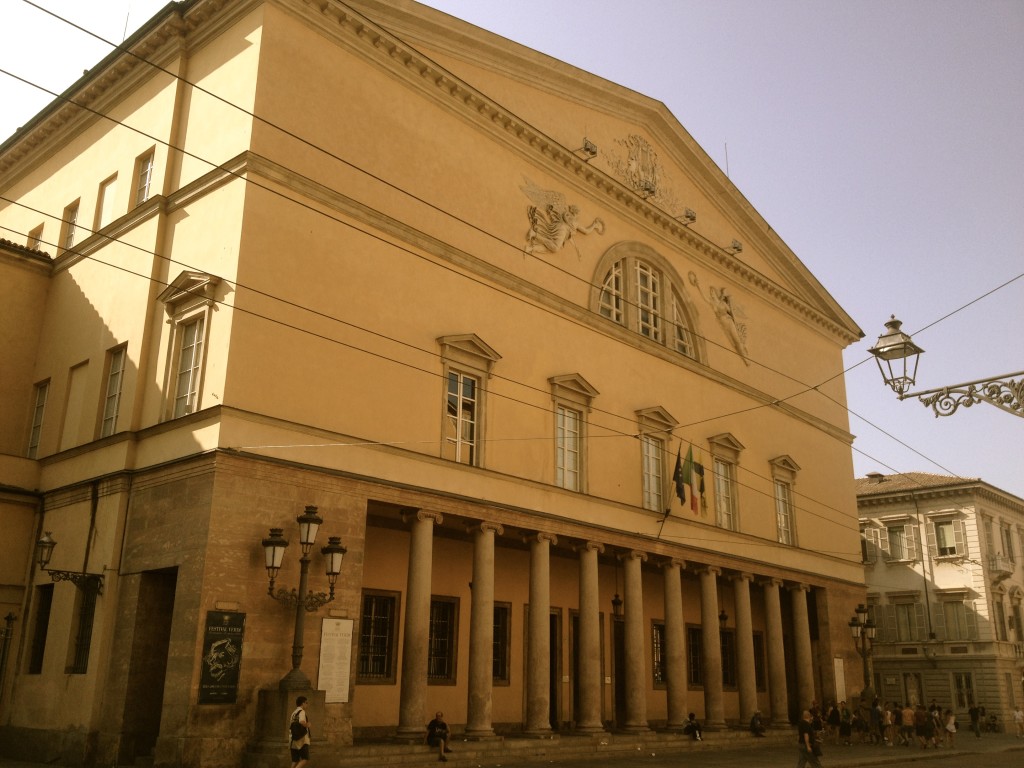 I end my trip at the stunning Teatro Regio (Via Garibaldi 16a ) where many of native composer, Giuseppe Verdi’s works have been performed. 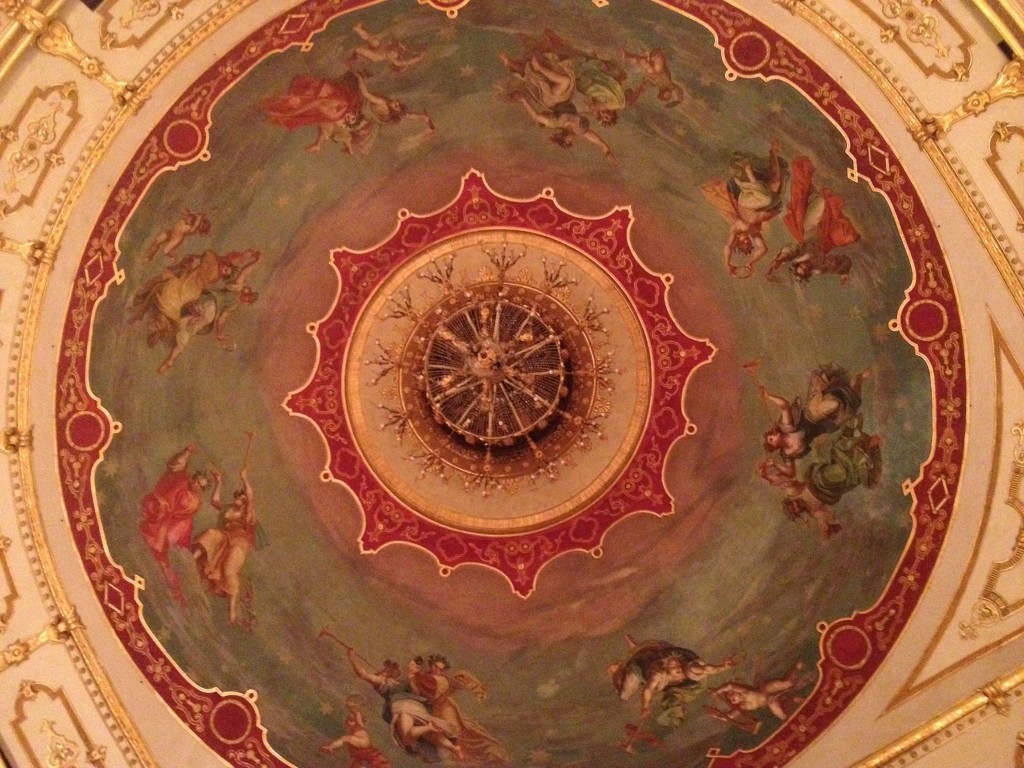 If like me you are not lucky enough to catch a concert or opera at the Regio, I recommend going on one of their free guided tours of the Teatro (Tuesday-Saturday, 10am-1pm and 3pm-6pm). It’s conducted in Italian so bring your guidebook along. Or just use your imagination and just think what it must have been like in the day of Verdi.

You can fly direct to Parma from London Stansted with Ryanair. Or alternatively, you can fly to Bologna. From Bologna , taking the regional train. It costs €6 one-way and the journey takes just 1 hour. 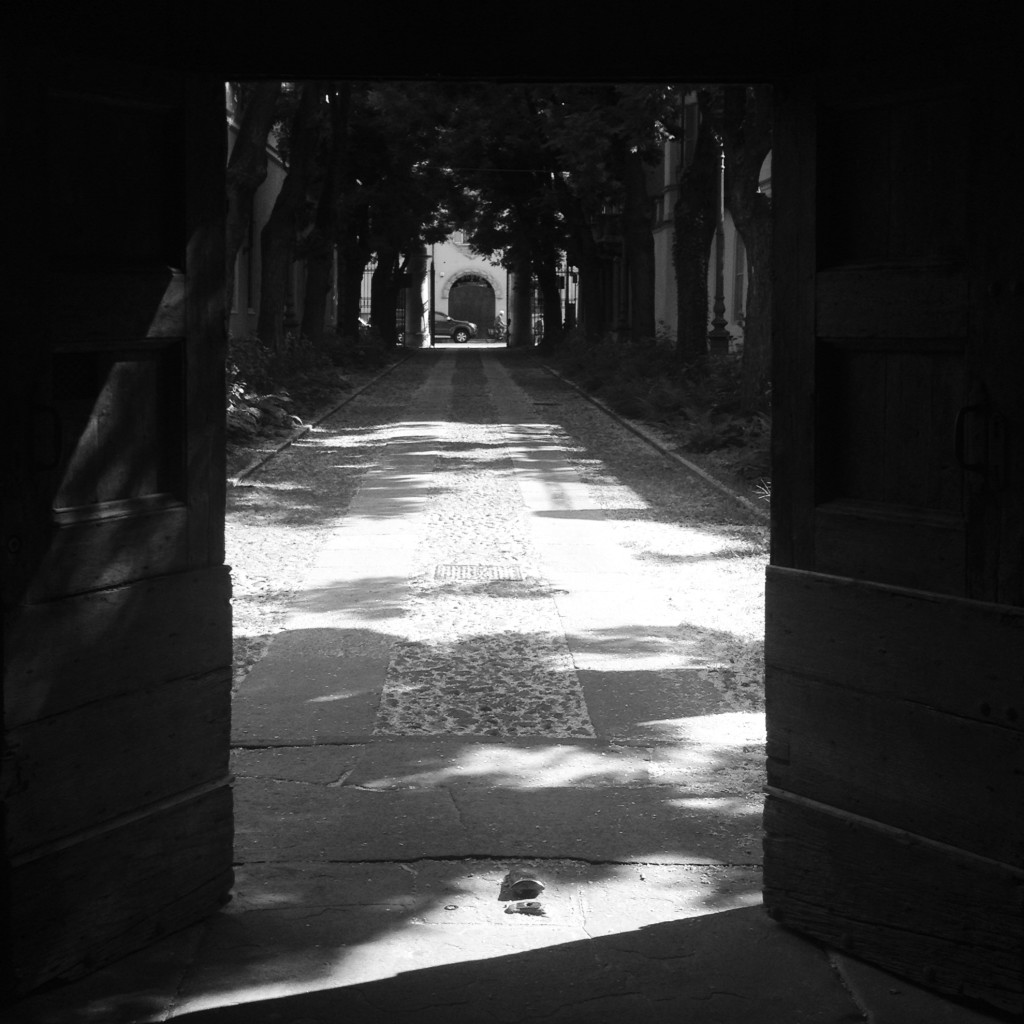 My thanks to the amazing people at Emilia Romagna tourism board for making Blogville a reality.  Also thanks to my fellow iAmbassador colleagues for their passion, craft and dedication to this project. Plus a big thanks to all my friends and fellow bloggers who I shared this unique experience. You can read about the bloggers amazing experiences of Emilia Romagna here. Plus check out my earlier 48 hour guide to Bologna.

I met Paul in Madeira this summer. We bonded over our common passion for good food and entrepreneurship. He runs Cupidious.com , a dating and relationship blog…