I am excited to have on the blog today my good friend and fellow LFC fan, Dan Convey (of Coffee and Caminos) Dan is sharing his experience of what it is like to walk the Camino de Santiago. In this post you’ll find some practical tips of what you should pack for the Camino, which routes to choose for walking the Camino , when is the best time to do the Camino, where to stay along the Camino de Santiago and also an idea of the delicious Galician cuisine you can savour in these parts. I honestly would walk the Camino just to eat pulpo a la Gallego Dan travelled with Follow the Camino who can help create a customised Camino tour for you.

Why walk the Camino de Santiago?

It takes some motivation to walk over 790 kilometres in one month, burdened with a large backpack, which begs the question why do it? Many pilgrims give the reason of ‘finding yourself’ (spiritually), others a personal challenge and others just a chance to get some much needed breathing (and thinking) space. Originally, the reason was to pay respect to St James, whose remains are thought to be buried in the Cathedral of Santiago. In recent years the Camino has gained in popularity, and the well-maintained and easy-to-follow path attracts visitors from all over the world. A large reason for the peaked interest is the US movie The Way (2011), featuring Martin Sheen. Movie-worthy or not, who wouldn’t want to walk through the idyllic villages of southern France or on the rural paths of Northern Spain while the sun warms your face? 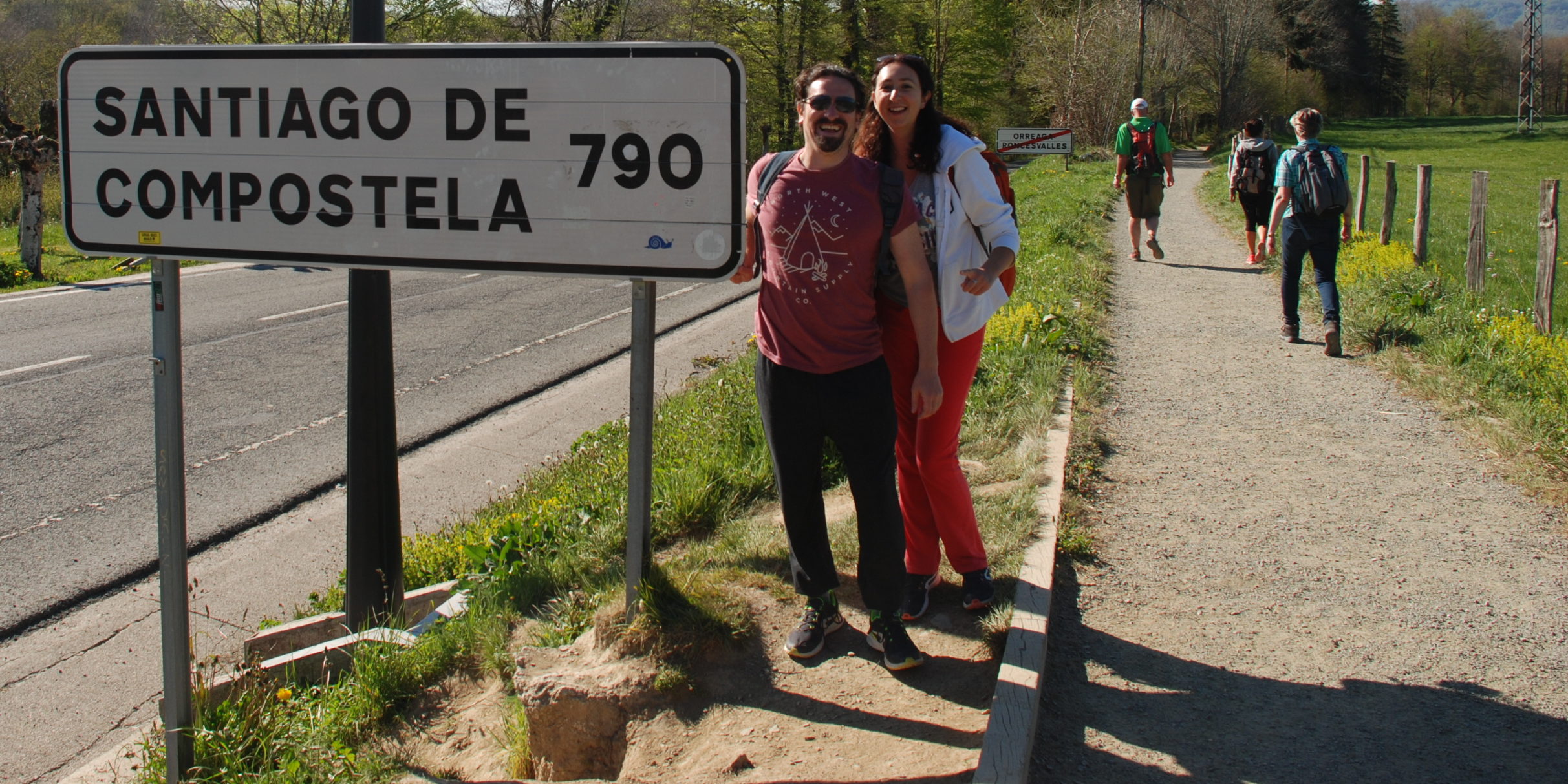 There are many Camino routes, which should I choose?

This comes down to personal preference. We took on the French Way (Camino Frances), by far the most popular route which totals just over 790km.  The French Way begins among the quaint archways and narrow steeped rues of Saint Jean Pied de Port, then crosses the border into the Spanish Navarre region, and makes its way through rural villages, countryside and towns, until arriving in Santiago de Compostela a month later (if all goes to plan). Alternatively, other pilgrim routes include the Camino del Norte, travelling along the northern coast of Spain from San Sebastian or the Camino Portugués, heading all the way up from Lisbon through Portugal. 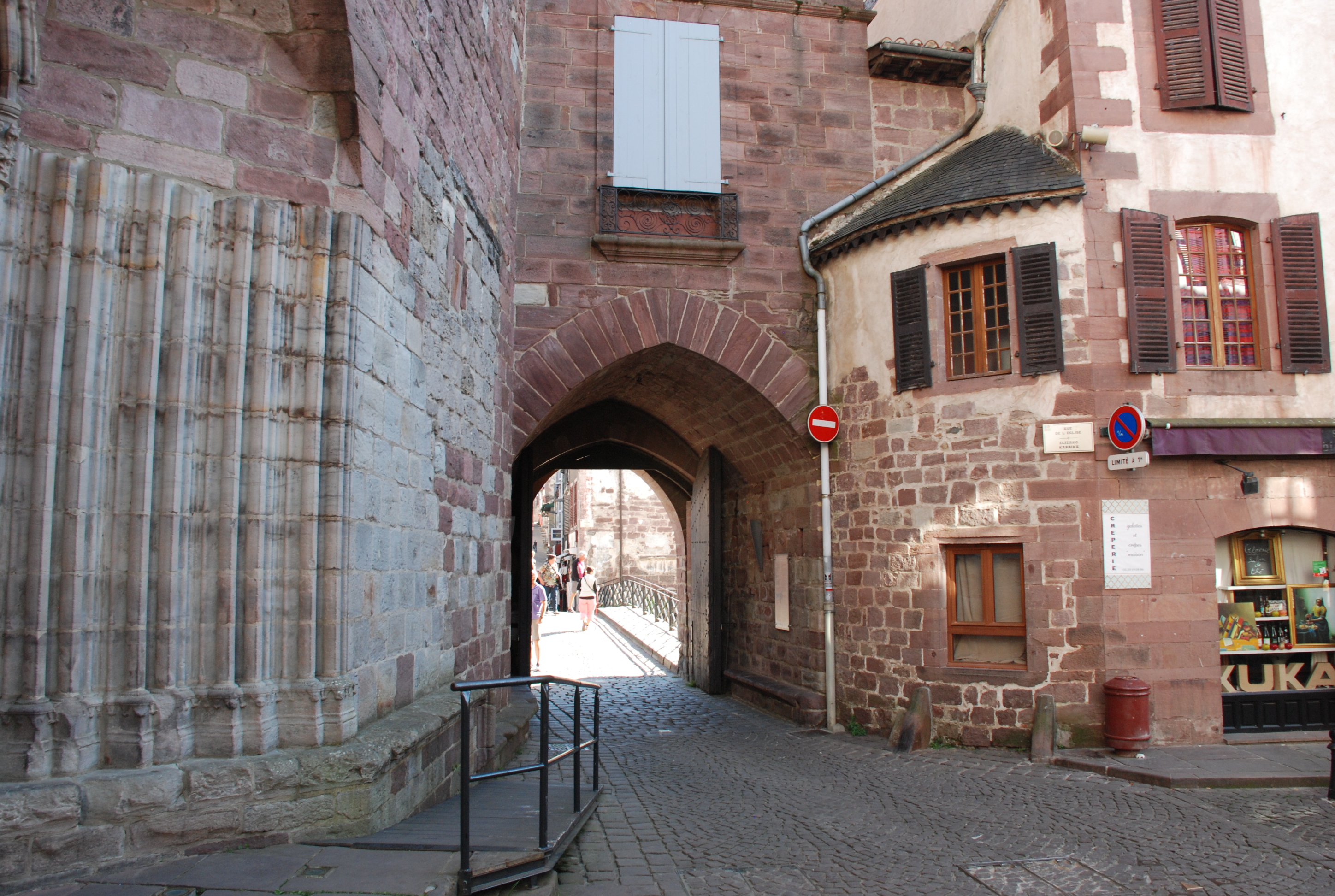 When is the best time to do the Camino do Santiago?

We were lucky that during the end of April, into May the weather was perfect with the exception of a few rainy patches and the very fresh air up in the altitudes. Stats from 2016, show that most pilgrims are on the track in May and September, whilst the summer months are not as busy as people presume. Winter and early spring can also bring snow and ice which, apart from the chilliness, can also make parts of the path dangerous. 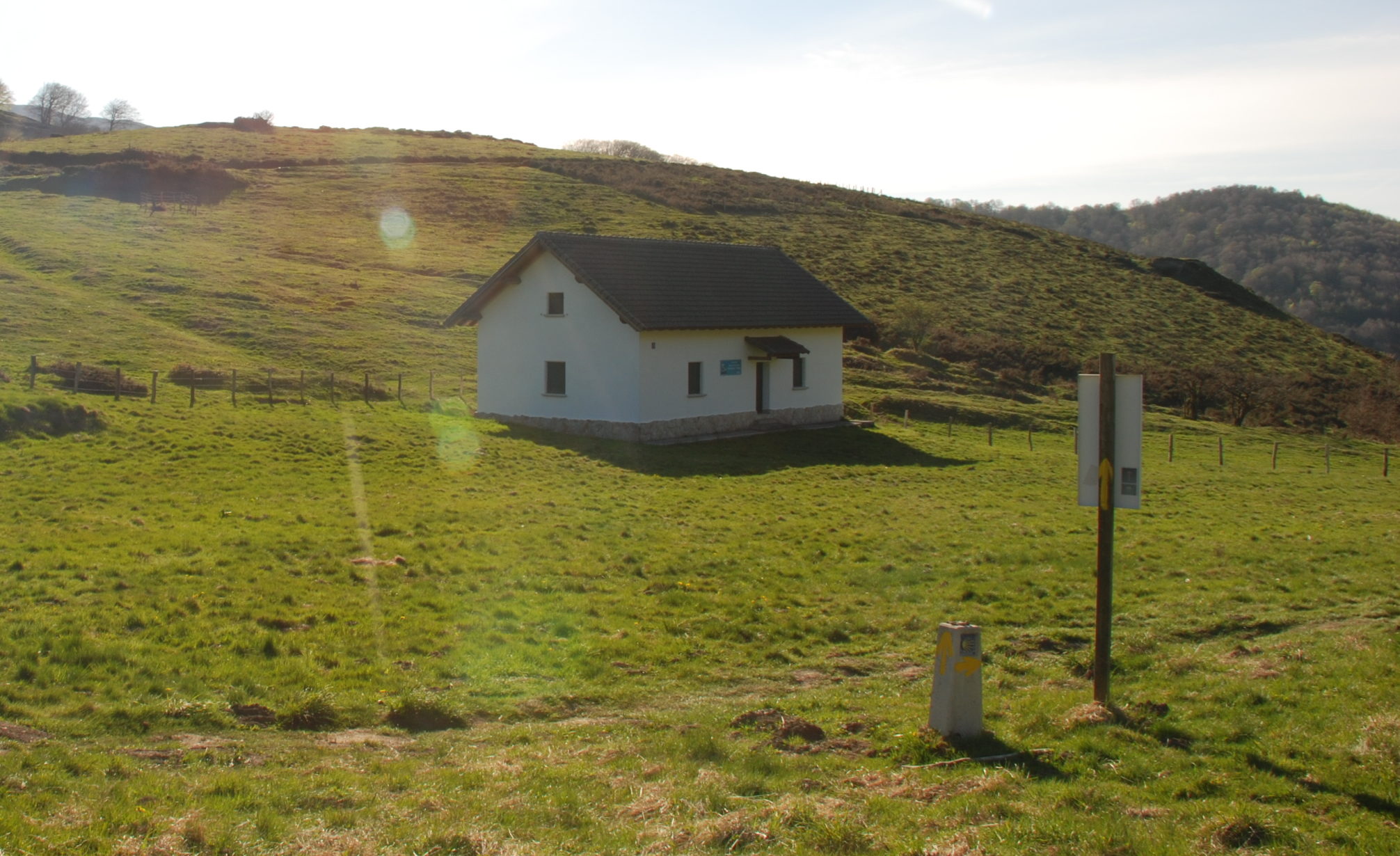 The rural way to Roncesvalles with habitual Camino sign.

How to prepare for walking the Camino do Santiago

Walking the Camino is no mean feat. You will need to walk around 25km each day for a whole month, more if you’d like to linger in a quaint village you found for a couple of nights. The best thing is to start trial walks long before going on your Camino. Follow the Camino tour company gives a gradual training guide – recommending to start four months before your actual Camino. They can also organise your accommodation and transfer of your luggage each day – if you don’t want to have to carry it yourself. You should expect to walk on inclines occasionally, such as to arrive at the summit of Alto del Perdón, but will be rewarded, as we were, with views of pilgrim sculptures and the Pyrenees below. 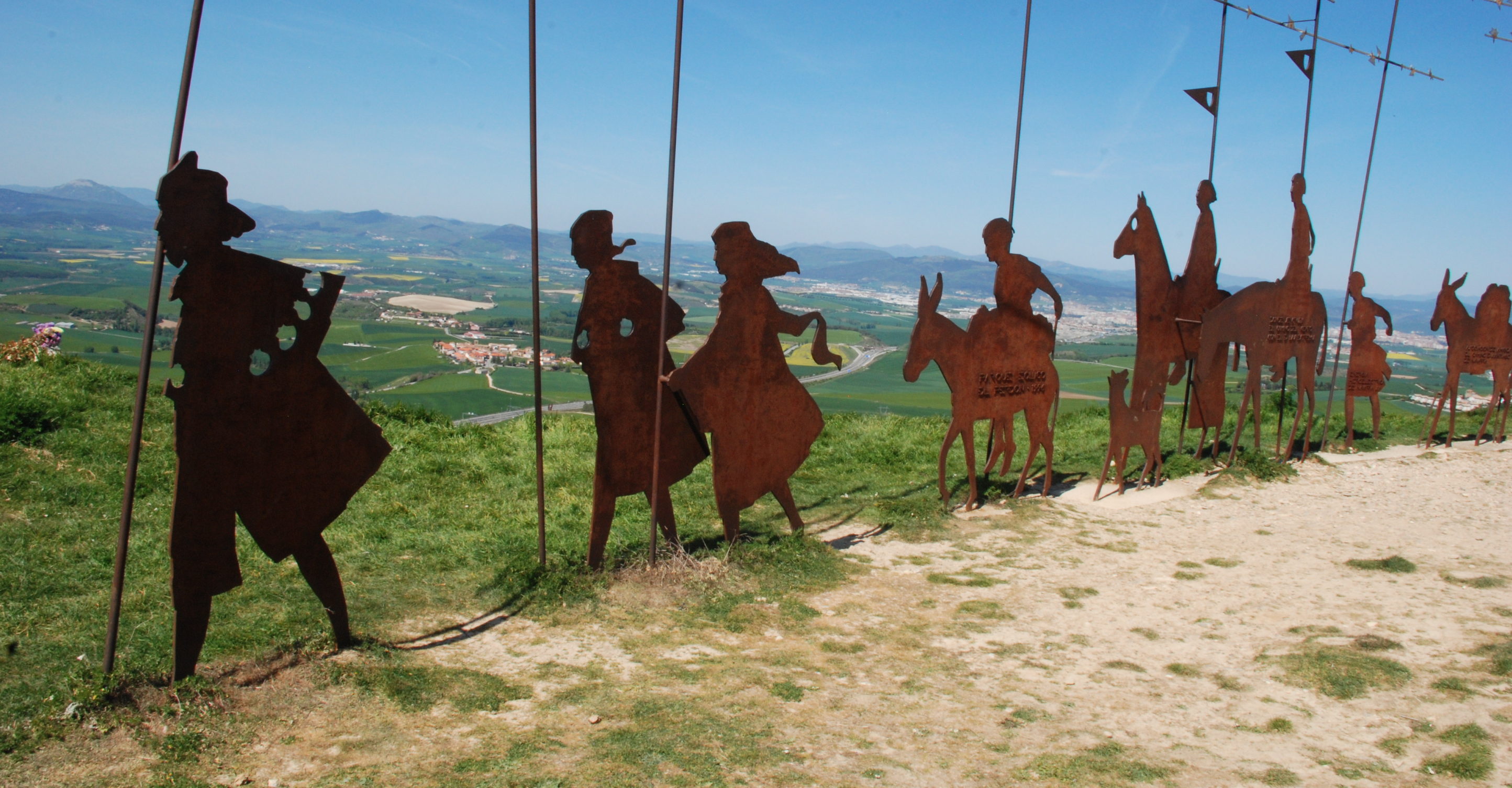 What to pack for walking the Camino do Santiago

A good idea is to look at the monthly temperature averages to find out the highs and lows. On our Camino, we were pleasantly surprised by 20 degrees Celsius during the middle of the day, but a bit shocked by the change down to 7 degrees Celsius after sundown. The region of Galicia, however was very cold, and is typically known for its rainy and unpredictable weather. For this time of year, we took jogging pants, a sweater, some light jumpers, several t-shirts, a light rain jacket and casual clothes to sink into after a day walking. Obviously, during the course of your day your clothes are going to get sweaty, damp, and possibly muddy, using a washing machine every day or every other day (at around 3€ a wash) can get quite pricey, so an alternative method is buying hand-washing soap. This way you can wash your clothes in the accommodation facilities – with most albergues offering drying lines.

While some parts of the Camino are along smoothly paved or cobbled paths, there are occasions when the earth beneath you isn’t so stable, so a light, sturdy pair of hiking shoes are recommended. For post walk, you will ideally take what you feel most comfortable in – breath-easy trainers or soft sandals will do the trick. 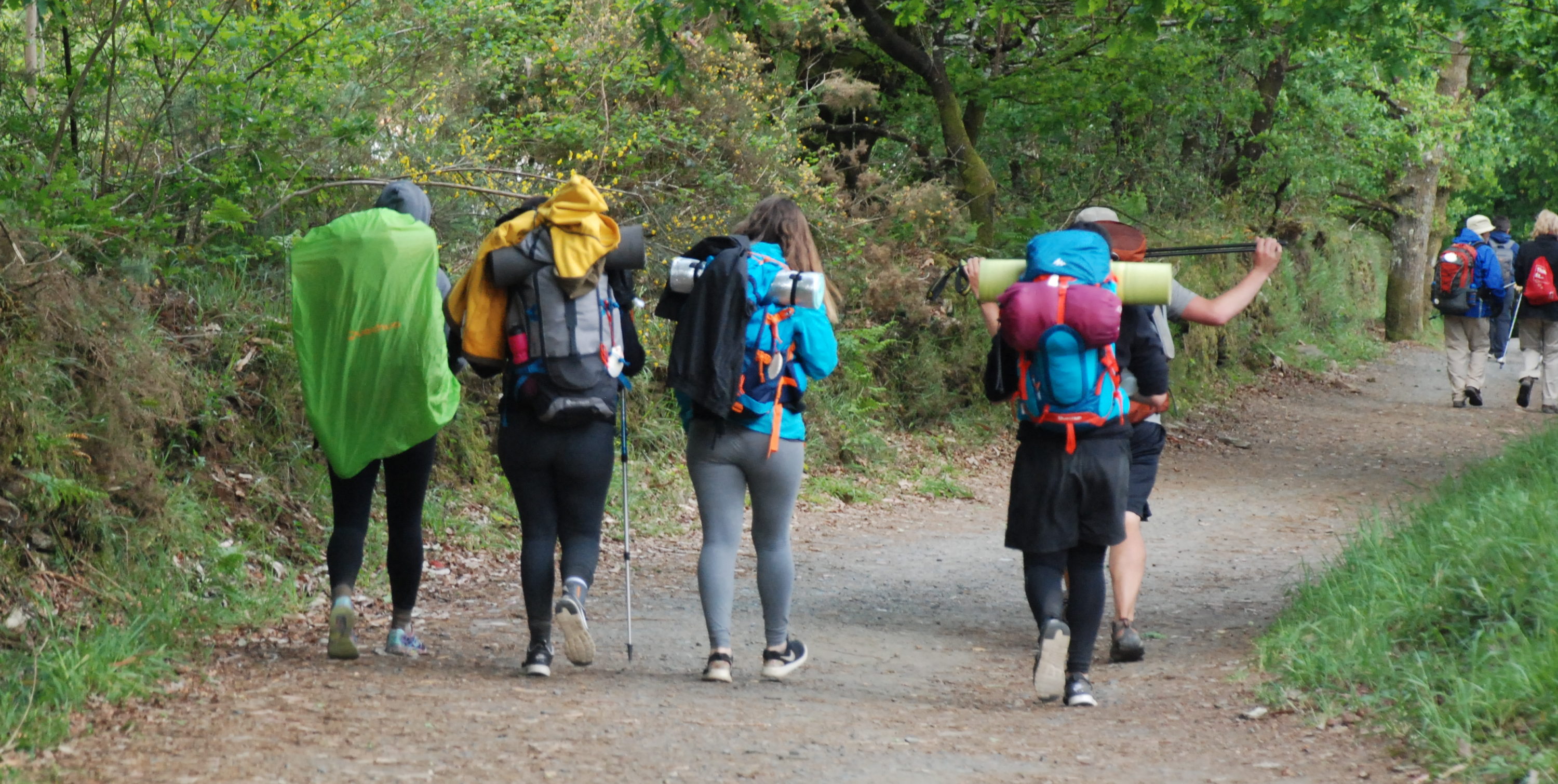 Sleeping bags, mats, waterproof covers and walking poles can all form part of your kit.

Where to stay along the Camino do Santiago 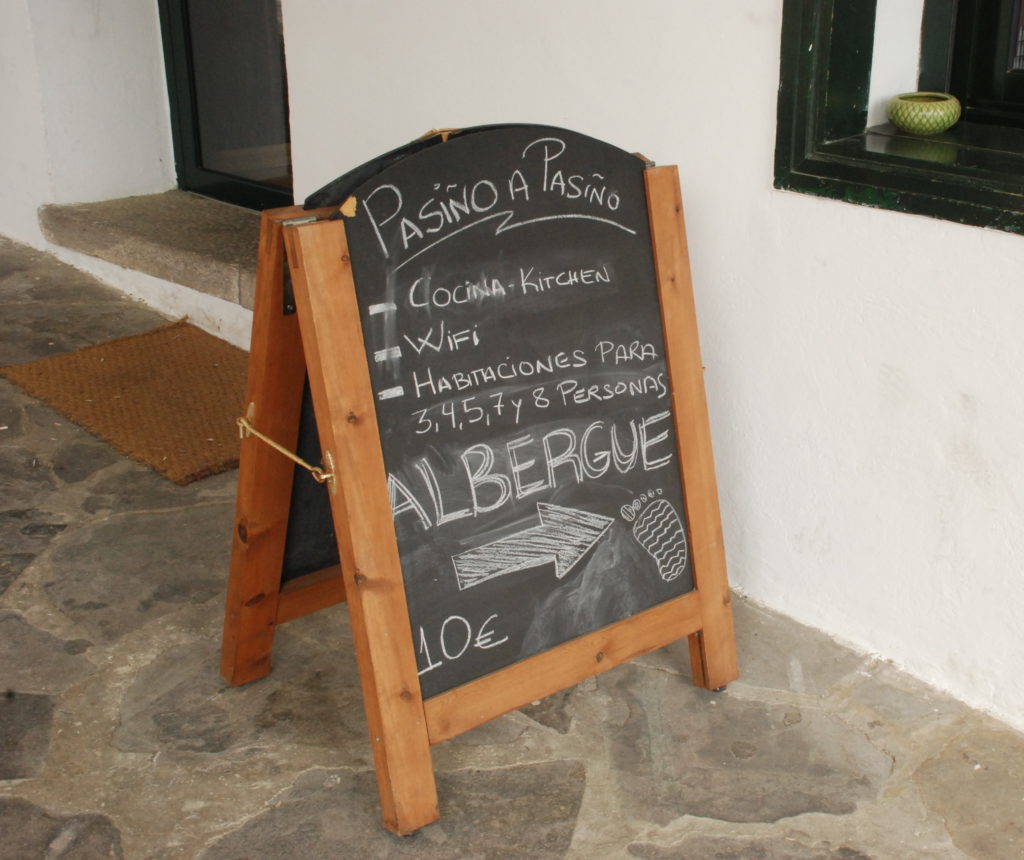 Due to the popularity of the route, there are many accommodation options for those following the Camino. Those on the lowest budget stay at Municipal albergues (pilgrim hostels supported by local councils), which only cost five or six Euros for a bed. However, be warned, you may share a dorm with many other pilgrims and the smells and sounds that come with that number. Also, don’t expect a lie-in as lights normally come on at 7am, and you are expected to be out by 8am. Lights go out for all after a specific time, after which you are expected to be silent, but earplugs are recommended to negate the habitual snorer. In some towns you can find albergues that operate on a donation-only basis (pay what you can), and as with the other albergues these mainly, if not all, operate on a ‘first come, first served’ basis, so set off early! 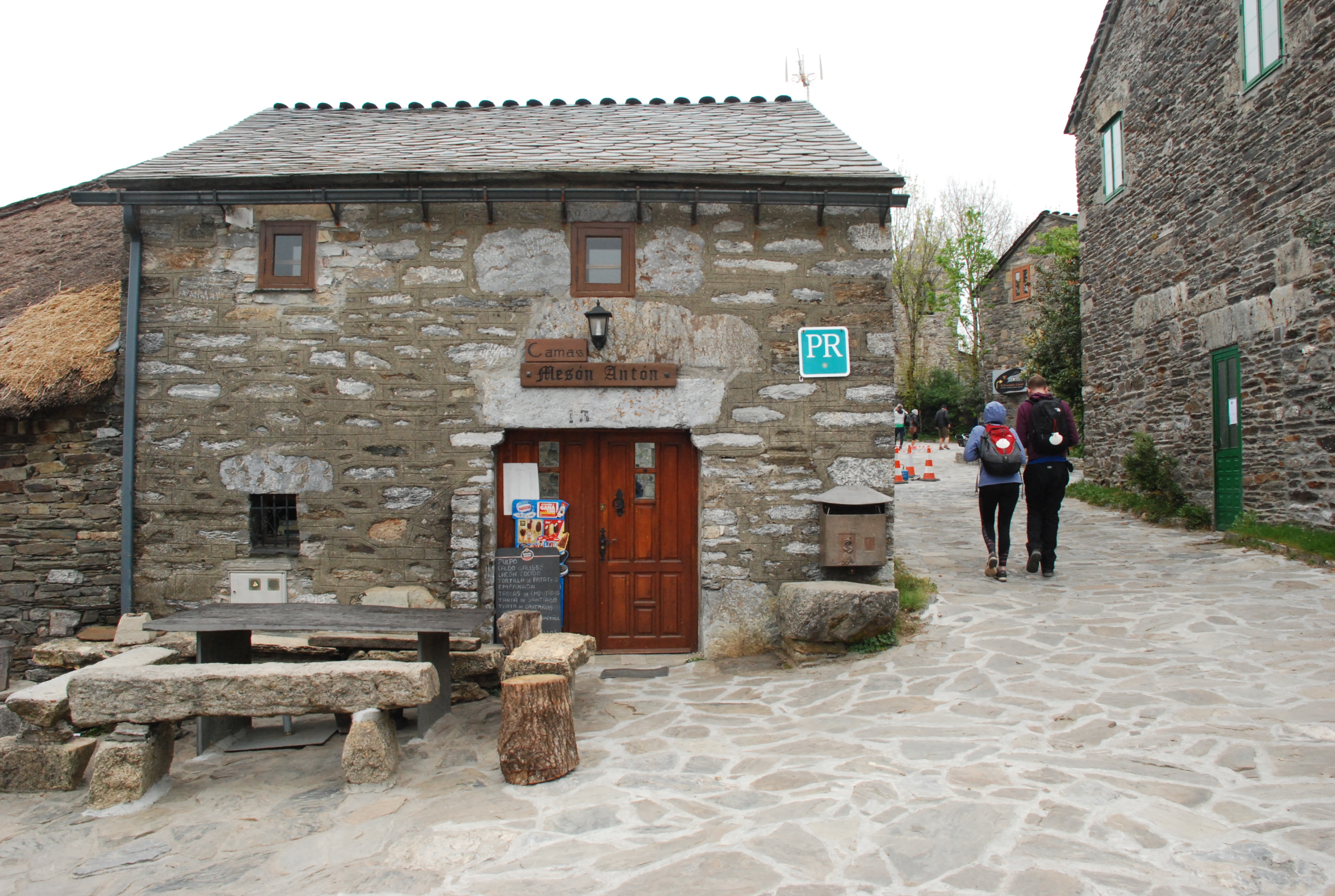 Casas Rurales are countryside houses which are a cosy alternative to albergues. The A Parada das Bestas casa rural in Palas de Rei gave us a private room with a bare-brick chimney and a 100-year-old restored bed. At around €65 for a double room it dwarfs most of the pilgrim dorm bed prices, but the family feel and comfort makes it a welcome treat. You can also request breakfast and dinner at the onsite restaurant for an extra cost. 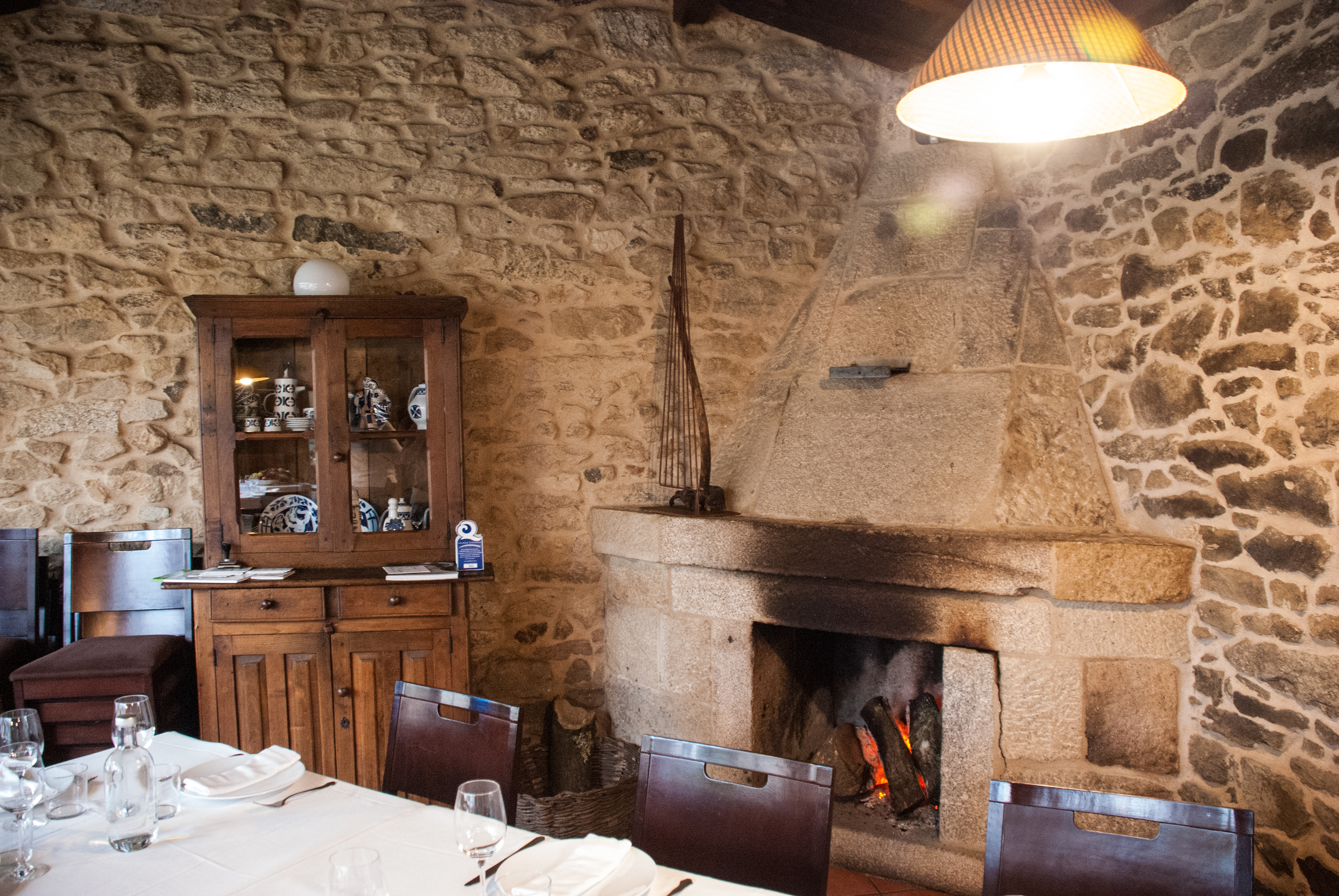 The Lar da Mota, in Arzua is a cute stone-walled country cottage with individual rooms starting from €50. It also boasts a colourful garden and onsite restaurant for breakfast (€5) and dinner (€17) at an additional price. 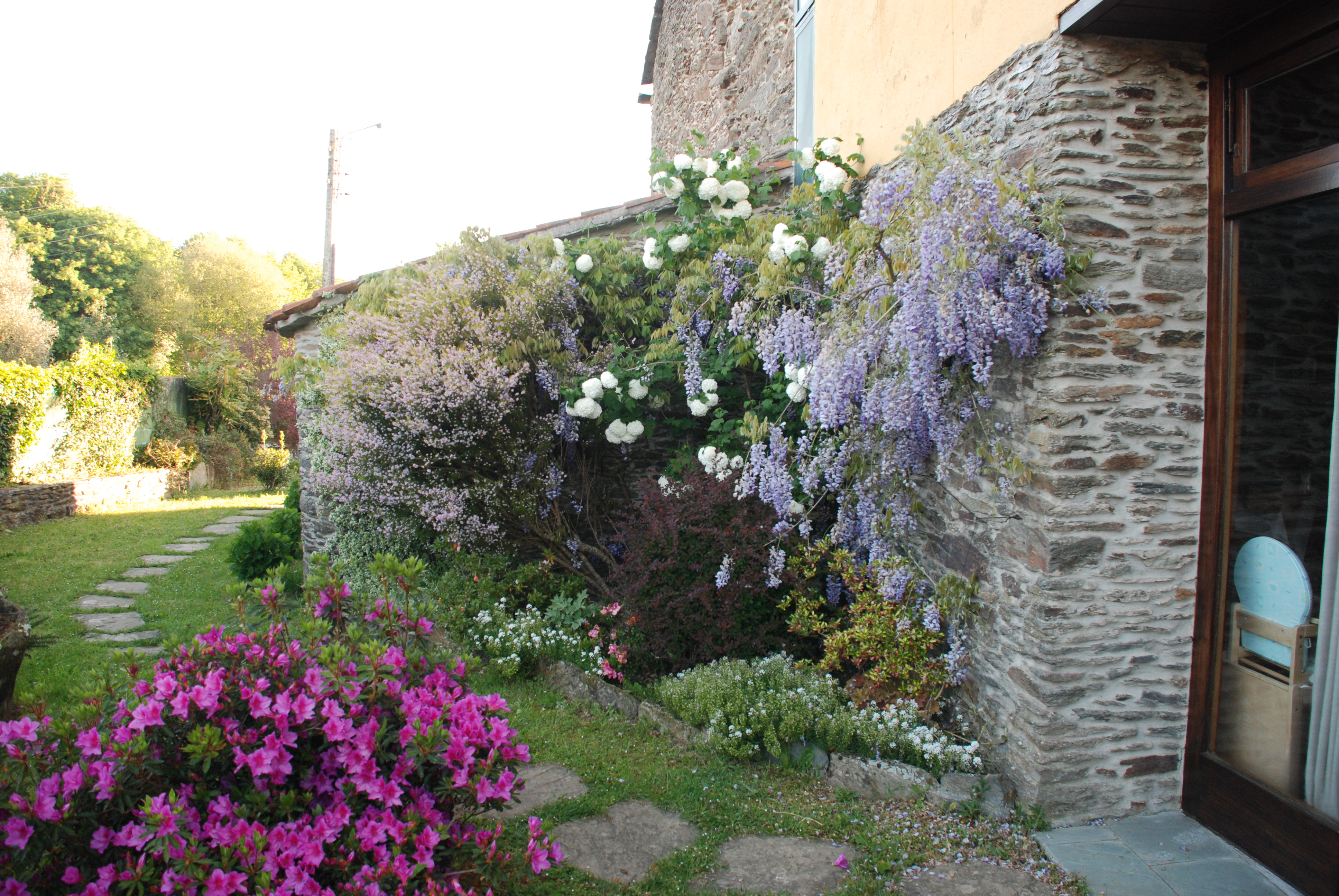 What can you eat on the Camino de Santiago?

Catering to almost every taste, the Camino can provide everything from a tapa of crispy and creamy croquettes (around €3) to Menus del días (menus of the day), which generally cost between €8 and €12, and come complete with starter, main and dessert. These vary due to local specialties, but a sample menu could include paella (rice with meat, seafood or mixed) to start, soft white merluza (hake) for the main and flan (similar to crème caramel) for dessert. These certainly set you up for the day, and usually include bread, a drink and even a café to cap it off. 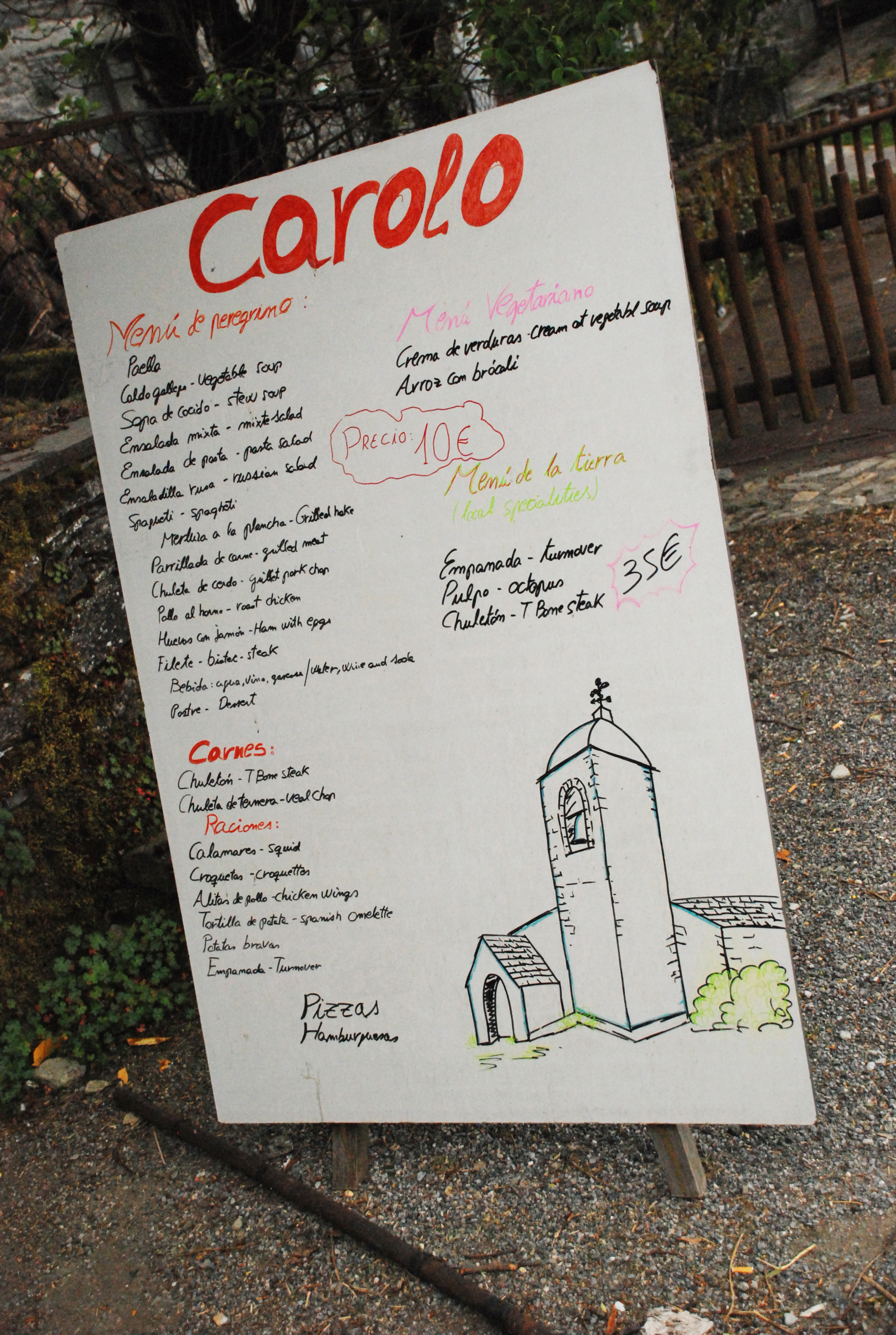 Pilgrim menu of the day

We experienced some wonderful local delicacies along the way, such as the pulpo a la Gallego (Galician-style octopus 8€ per racion, which is more than enough for one), the biggest steak we’ve ever seen (big enough to satisfy three people, the plate to share costs only €22 at Taberna Moreno restaurant in O Cebreiro) and the best garlic mushrooms we have ever tried (Bar Soriano, Logroño). Getting nearer to Santiago, we washed down our food with Estrella Galicia (around €3 for una caña or small beer), one of our favourite Spanish beers. 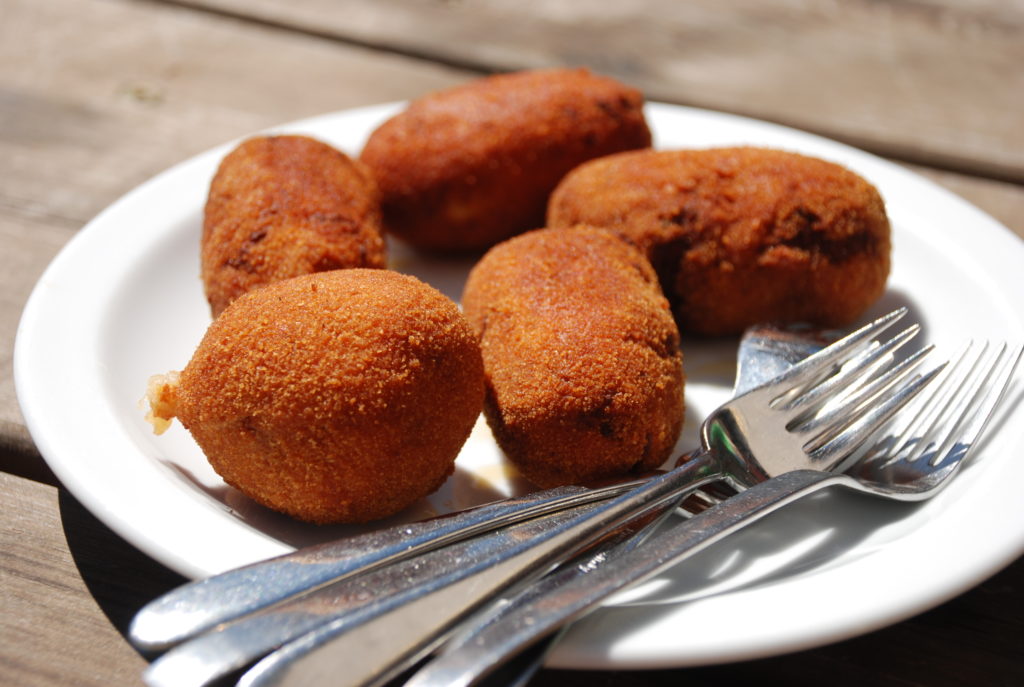 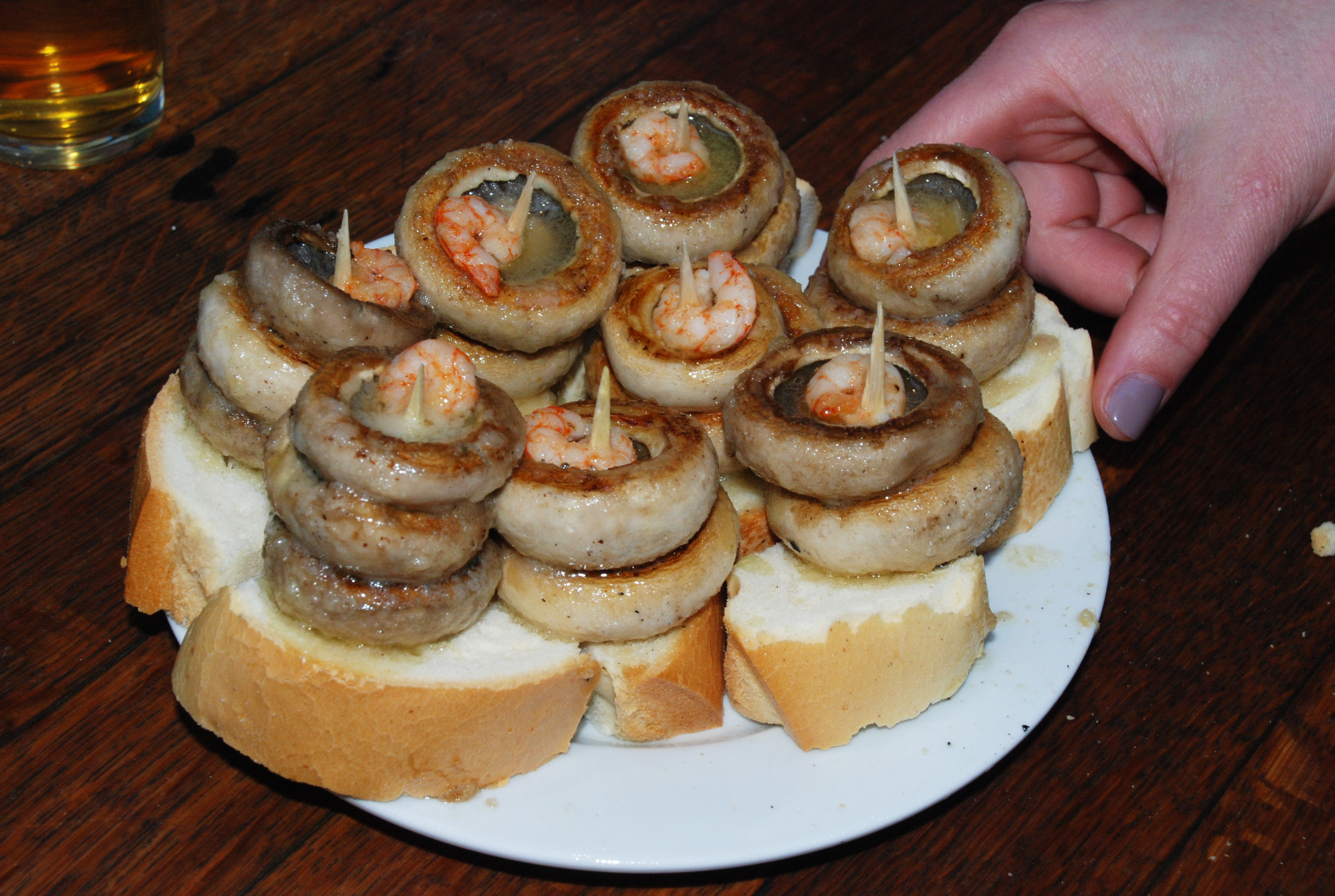 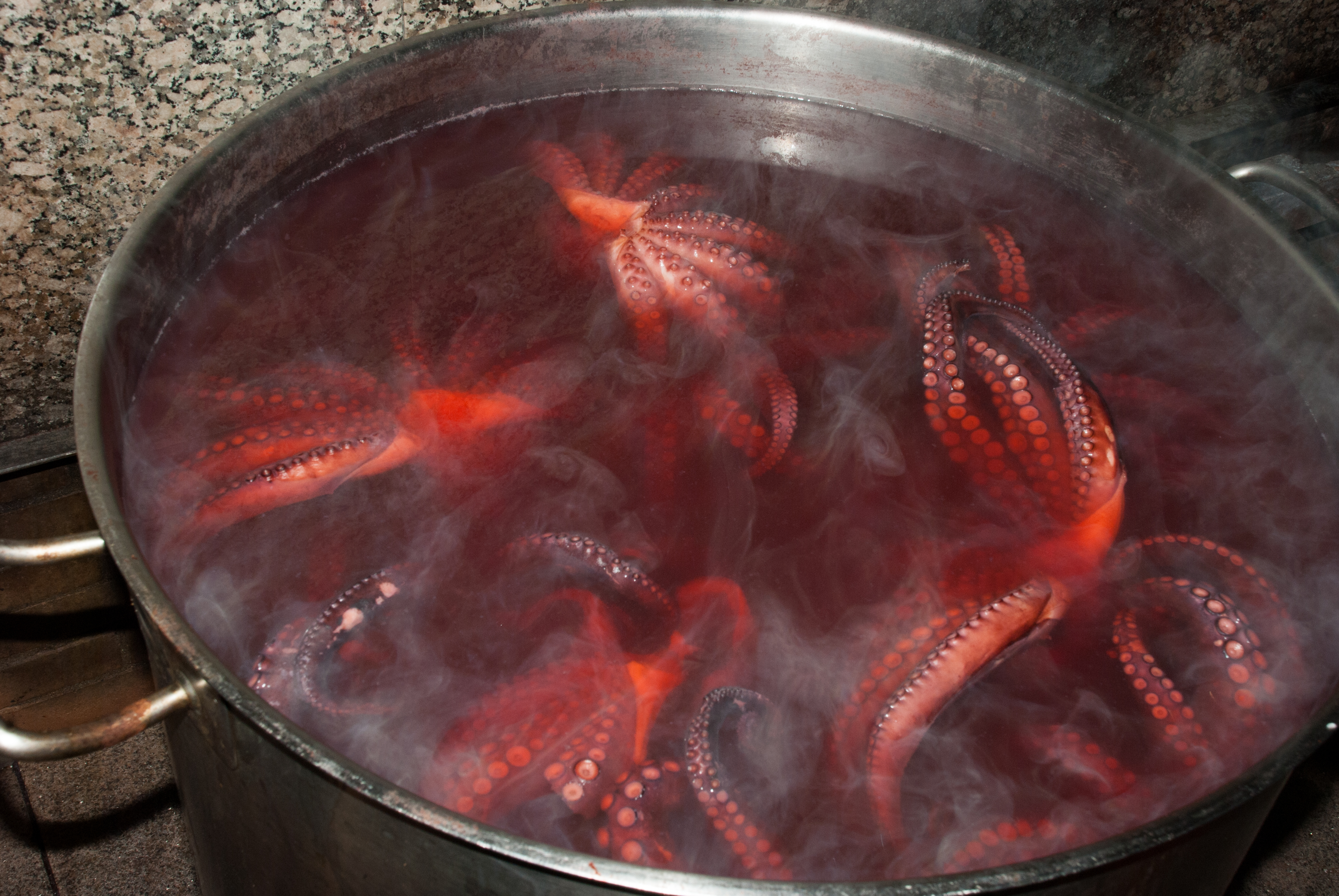 Pulpo being prepared in huge vats 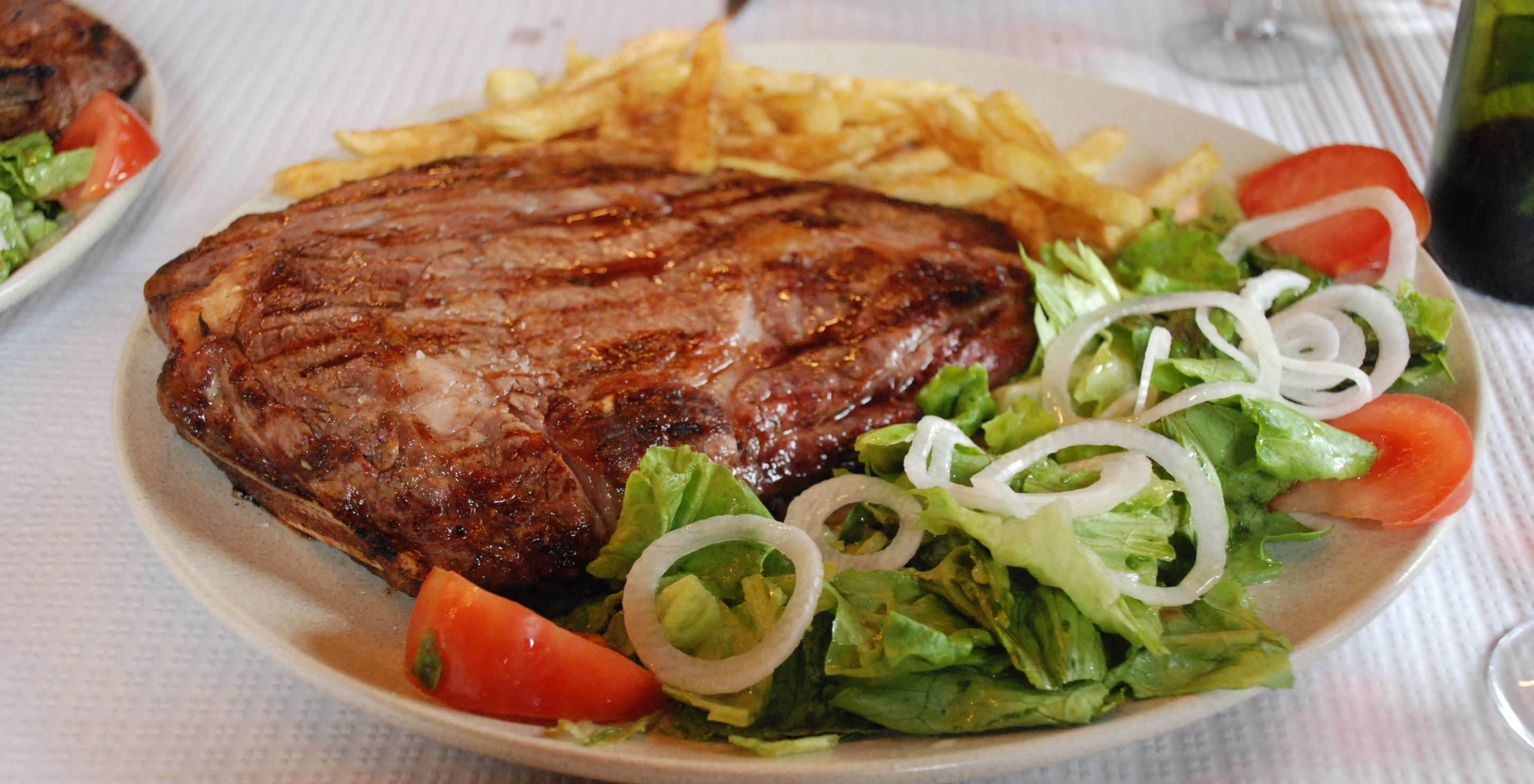 What happens when (not if) I finally arrive in Santiago?

Many pilgrims (as we did) head straight to the Pilgrim’s Office in the city to receive their final stamp, and for those that deserve it, the certificate of the Compostela. In order to obtain the certificate you must have a dated stamp from Sarria at least. This way, the official responsible for checking the passport can tell if you completed the last 100 km of the Camino, the minimum requirement for collecting the certificate. The certificates cost €5, and you may have to queue for it, depending on the number of pilgrims. 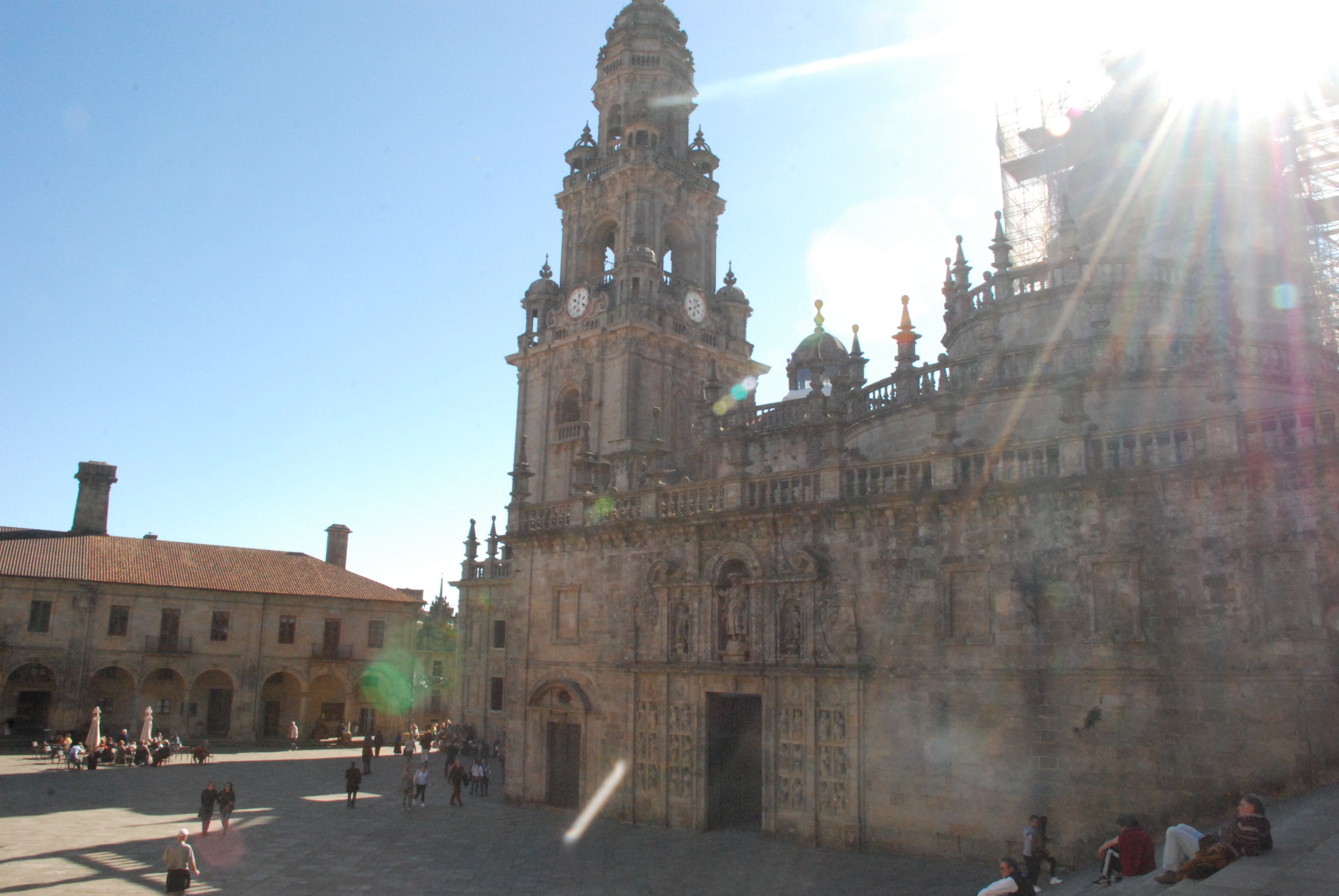 To complete the journey, pilgrims habitually attend the Pilgrim’s Mass at the Cathedral. These run at 12 midday and 7:30pm. We arrived half an hour early in order to get a seat and managed to get the last few near the back. The mass gave credit to those who had arrived from a different number of countries that day. We were pleasantly welcomed with a ceremony of choral singing and some short sermons.

For the much-anticipated finale, the Botafumeiro (a huge thurible weighing 50 kilograms and spanning one and a half metres) was hoisted high into the Cathedral’s naves and swung across the crowd, emitting incense over all. 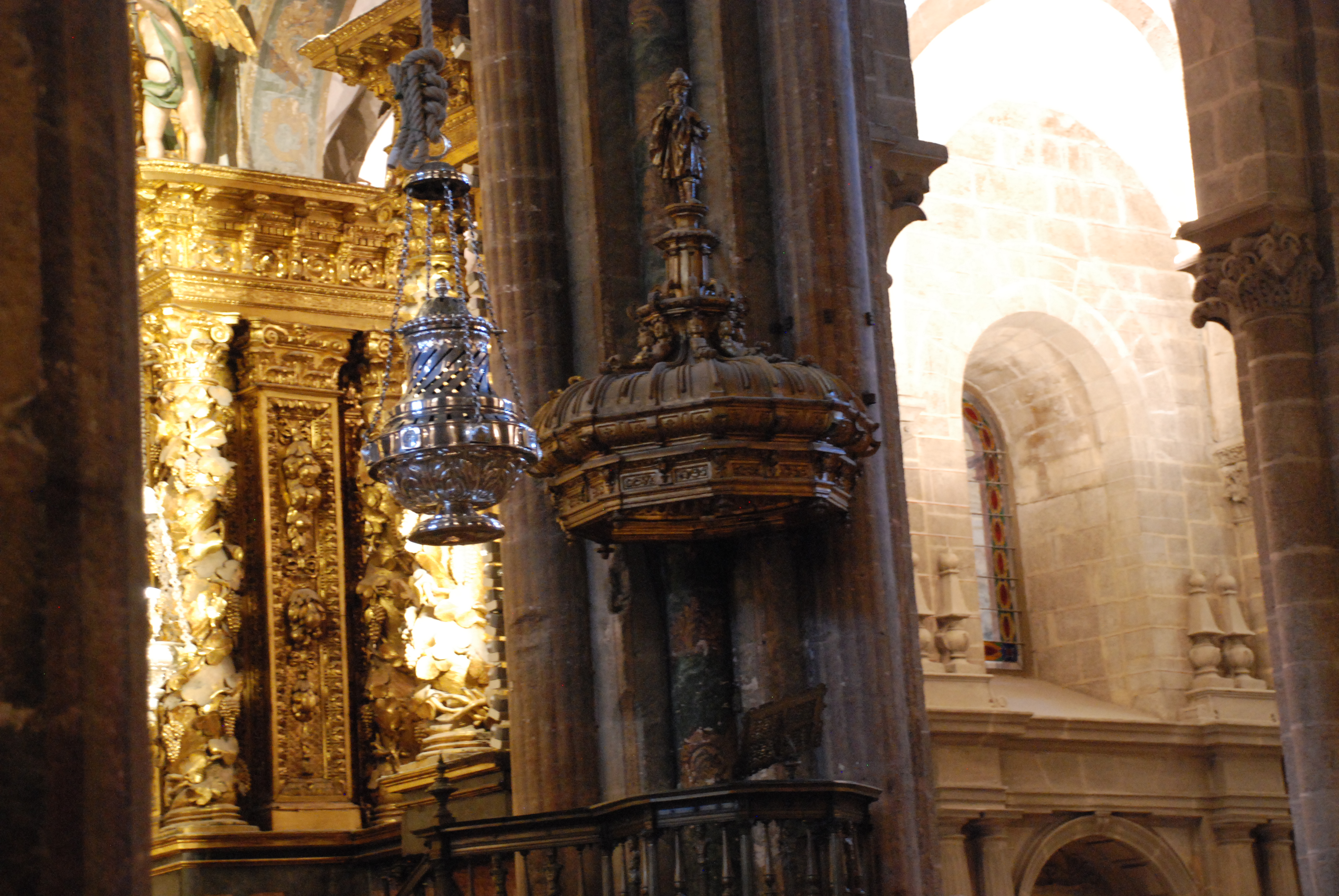