Funny how talking about a place to a friend can make you nostalgic about a place. It’s like entering a hidden portal that takes you magically back in time exactly to that moment.

Friend and fellow blogger, Ayngelina Brogan from Bacon is Magic is off next week to explore Finland as part of a blogger fam trip to the region.

She mentioned if I had ever visited Tampere and had any cool tips about the place and BOOM!… just thinking about all the places I visited made me want to grab my Macbook air and whip out a fresh word document to start writing down all the cool things I did.

Before they escape my memory.

Sadly I have no pictures from the trip to Tampere. My iPhone 4 with all my pictures and memories from the trip was stolen in Nice. I just have a few from my Instagram feed to share with you.

In this case, the awesome local was a guy called Ville Virkki, owner of Tampere’s coolest hostel called the ‘Dream Hostel.’ 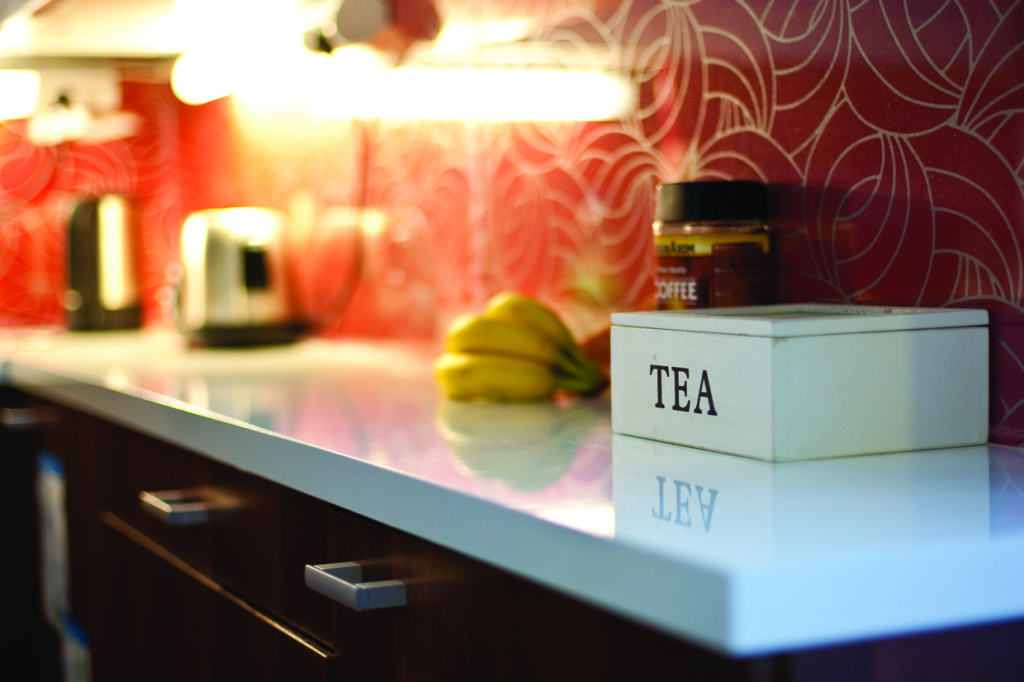 Dream Hostel, Tampere. Beautiful hostel and you get to meet the great Ville!

I arrived at the Dream Hostel on a damp evening in July and on entering the hostel was afforded a hearty welcome and some popcorn by Ville.

Popcorn? The Dream has a memorable tradition of offering popcorn whenever it rains in Tampere ( which it does a fair bit so your chances….) or when it is Friday.

After dumping my bags, Ville is standing there with towels and saying that we are heading to the sauna.

I am not sure about the idea.

After the stress of a long journey, a pint of something local would have sounded like a better idea.

‘Visiting the sauna is our favourite national pastime. It’s very relaxing and the most authentic Finnish experience. Trust me, you’ll enjoy this.’

A 15 minute bus ride and we are out of the city and transported into a different reality. 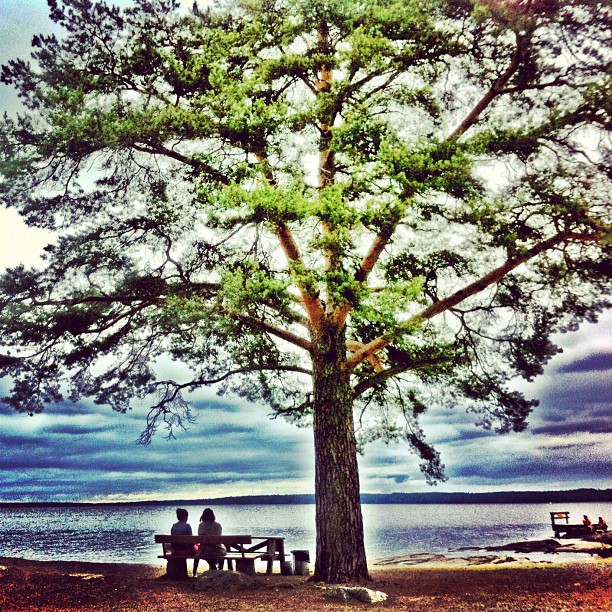 Everywhere I see are lakes and green lush forests. It’s a heavenly sight. I feel I am in God’s land. I don’t know what heaven looks like but I sure think it can’t be more beautiful than this place.

I already  feel the stress draining away.

We then come to public sauna. It’s by the lake. A gaggle of old men, nubile young women and kids are all scurrying back and forth from the sauna house to the edge of the lake. There is an elevated platform from which they jump into the water with a big ‘yelp!’

Ville shakes his head and informs me

Sensible lad. I see grown men and boys walking back, shivering as they enter the hothouse. It’s one of 3 public sauna houses in Tampere. A mere 5 euros gets you access. I’ve been to saunas in my local gym so I am expecting a snot inducing steamy affair. However what I had not reckoned with, is the hardiness of the Finns.

I walk into a cauldron of steam. I make the mistake of trying to breath through my mouth ( bad habit from being a kid) instead of through my nostrils and instantly feel, my organs are cooking. Ville motions me to take a seat on one of the benches higher in the room. My contact lenses were melting and I couldn’t for a moment see a thing. I felt like running out but after a few slow breaths, I begin to relax and adapt to my surroundings. I see in front of me a row of people of all ages, mainly older men, lobster faced with a kind of half-pained expression. It doesn’t look like a very pleasurable experience. Especially to a newbie like me. Even the kids seem to be struggling.

Everyone’s sucking it up so I stick with it. I maybe didn’t want to be perceived as the foreign ‘jessie.’ After a few minutes, it’s not getting any better. Ville seems to be toiling in the heat so we finally bail and walk into the fresh cool lakeside air. It’s only then that I feel the beauty of the whole exercise. Pain and then pleasure. It’s like a warm but chilled blanket of happiness, the air, tousling my eyebrows and tufts of my hair. I can feel the endorphins pouring out. I am on a natural high. Ville then cranks out of his rucksack  a pair of chilled beers. I sip on that and feel heavenly bliss.

The Finns now how to relax in style.

The next day, Ville takes me for another bite of the authentic Finnish life. This time we are trying something a bit local and special.

We visit the local Tammela market. It’s bustling at 9am and packed with locals.

‘Its’ a typical breakfast. You will like it,’ Ville assures me.

‘MUSTAMAKKARA’ he says, in his deep baritone voice.

I love the word the moment I hear it. It’s love at first sound. It rolls off my tongue and the moment he mentions the word, it plays on repeat in my head. That’s until I see ‘it.’ 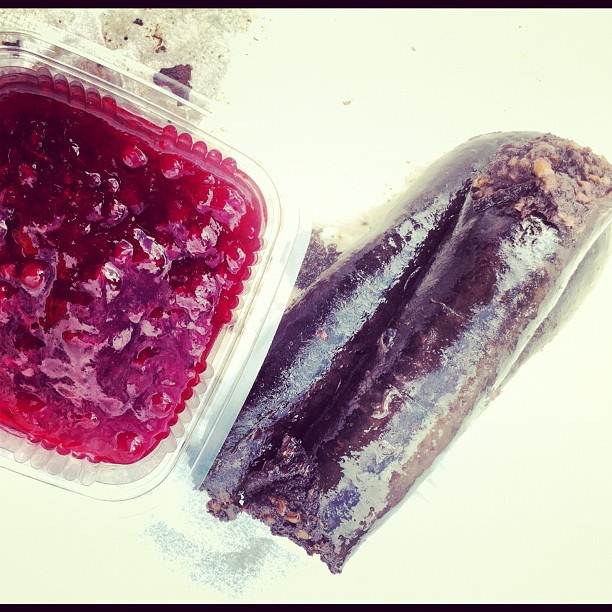 Mustamakkara with Lingonberry Sauce: Tastes better than it looks…..trust me

On first look, you might mistake it for a big fat turd to be frank.

Looks can be deceiving though.

Ville sees my disconcerted face. He then brings out on a tub of Lingonberry sauce which definitely adds a bit of colour to the proceedings.

‘What’s it’s in the sausage’ I ask nervously.I have that half-pained expression I saw on the faces of the men in the sauna last evening.

‘It’s blood sausage. We eat it with the lingonerry sauce and wash it down with milk.’

I realise with dread how Ville’s firm and deep voice has an air of authority about it. You can’t say no to it.

I stop worrying of I can stomach something this exotic at this early hour of the morning. In the spirit of trying new things, I decided to go for it.

I take the fork. Dive in my fork. Sausage has a juicy red interior . I then dunk it liberally in the lingonberry sauce. Taste.

Surprisingly, it’s damn tasty. I love the mild spicy flavours ( thinking of Haggis ) mixed with the sweetness of the lingonberry sauce.

Then gulp it down with some good, local full-fat milk. All that for just 2 euros.

Who said Finland was expensive?

Fortified by blood, sucrose and calcium, we go for a walk through the city. It’s green and lush. Lots of red brick mills along the side of the rapidly flowing Tammerkoski river reveal it’s industrial origins. In it’s heyday, Tampere was a hotbed of paper production and cotton making it an industrial superpower, earning it the dreaded epitaph ‘Manchester of the North.’ It’s great walking around the downtown with it’s mix of historic buildings. Especially at night when the canal walls and surrounding buildings are tastefully lit when it’s dark.

We then stumble upon Tallipha, a collection of quaint Russian style houses in beautiful garden surroundings. Very twee indeed. The houses were formerly stables from the 19th century. In these houses you can find artisan boutiques, handmade chocolate and a café. We’ve barely walked off the calories from breakfast we are already sitting down in this traditional , quaint cafe with plates of homebaked goodness and being served tea in ornate china teacups.

Our next stop is something off the beaten track. Ville takes me near the railtrack near Santalahti, pass a hippy commune and one of the city’s popular public sauna’s. By the railtrack we visit an abandoned roof felt factory. It’s got some amazing work of graffiti there. This place really moved me. 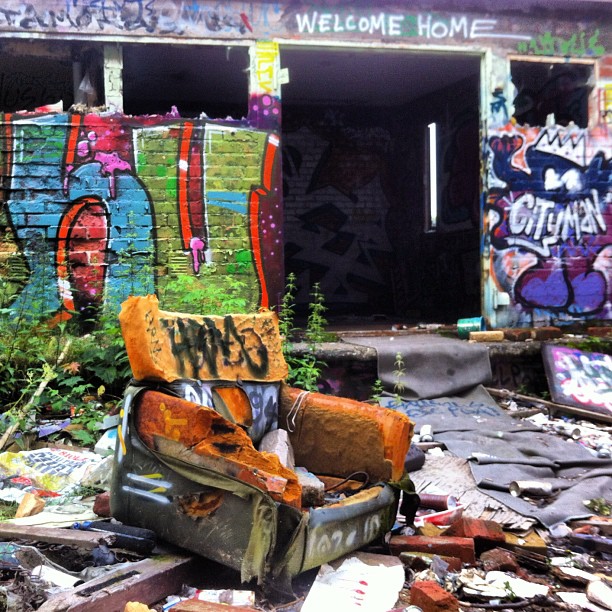 Something about the whole abandoned desolate nature of a place and seeing all these empty spray cans and colour everywhere-I feel extreme highs and lows. I’ve seen a lot of graffiti around the city. It’s a big part of the city since the 80’s and for a small city, it has a very vibrant scene. The locals are proud of it and there is a demand for it seems. In 2011 the Tampere Power Utility ordered a large work of graffiti art for the temporary fence surrounding a construction site near the Frenckell dam bridge in central Tampere. The graffiti, “Fiery Stream”, was made by seven graffiti artists, including Tero Karvinen, also a provincial artist laureate of the Pirkanmaa area of Finland.

It’s late in the day and the sun is breaking through the clouds. Ville has one more surprise in the bag for me.

We power walk to the Pyynikki Ridge. Rising between two lakes this is a beautiful forested area of walking trails that is great for people for all ages to explore. I find wild berries growing everywhere and voraciously plunder them. It’s a steep climb up and suddenly we come to a clearing in the forest and a carpark. I then realize what we are here for. In front of us a there is a red granite observation tower (adult/child €1/0.50; h09:00-20:00) which apparently is on top of the world’s highest gravel ridge Pyynikinharju.

However the view is worth it. From the top of the tower, I get a stunning panoramic view of the forest, the city and the sea in the distance.

‘Next time, you must come for longer’

Ville notices my solemn almost wistful look as I see the sun sink beneath the horizon. I agree and nod my head.

It was an amazing, fun-filled 36 hours.

We go down the tower and I then drown my sorrows with some freshly grounded coffee and some ‘munkki’ aka doughnuts.

They were the best doughnuts I have tasted.

As if I needed another reason to revisit Tampere.

My trip Tampere was made possible by the kind sponsorship of Visit Tampere and Visit Finland. Massive thanks also to Ville from Dream Hostel for being the most awesome guide ever. As awesome their support was, please note that all the views and thoughts are completely mine 🙂

Champing? Bamping?!! Nightswapping? Warmshowers? Wwoofing? University Rooms? Does this sound like a bizarre academic adventure out of an adult fantasy novel, with a touch of…