I’m in the middle of a very scenic vineyard . As I dip my toes into the south facing sloping hillside, the intense June sunshine pricks my skin and I feel the unique egg shaped green bottle of wine in my hand slowly slipping through my my sweaty palms. I need to drink some water maybe.

I am in the company of Dominika Černohorská, one of the most gifted winemakers in the region. She pours into my glass, a generous splash of her Cuvée Leonard wine. FYI, I am a very bad wine taster. I hate to spit out wine, especially if it tastes great. This is the 5th wine variety I have tried from her award winning label, Plenér and I love all of them. Dominika asks me what flavours I sense? I can feel a nice juicy acidity which feels refreshing and also a deep intense minerality, which she explains comes from the bedrock of limestone in the area. Why call the wine Plenér ? She decided to call the label Plenér ( In landscape- In Planeur ) from her desire to create a connection between wine and art through her wine. Drinking her wine, at source, in the heart of her vineyard, I definitely feel a strong connection with the earth and this place. I long to sit there for awhile. I gaze in the distance at the limestone hills and mesmerising patterns of long rolling fields in front of me. 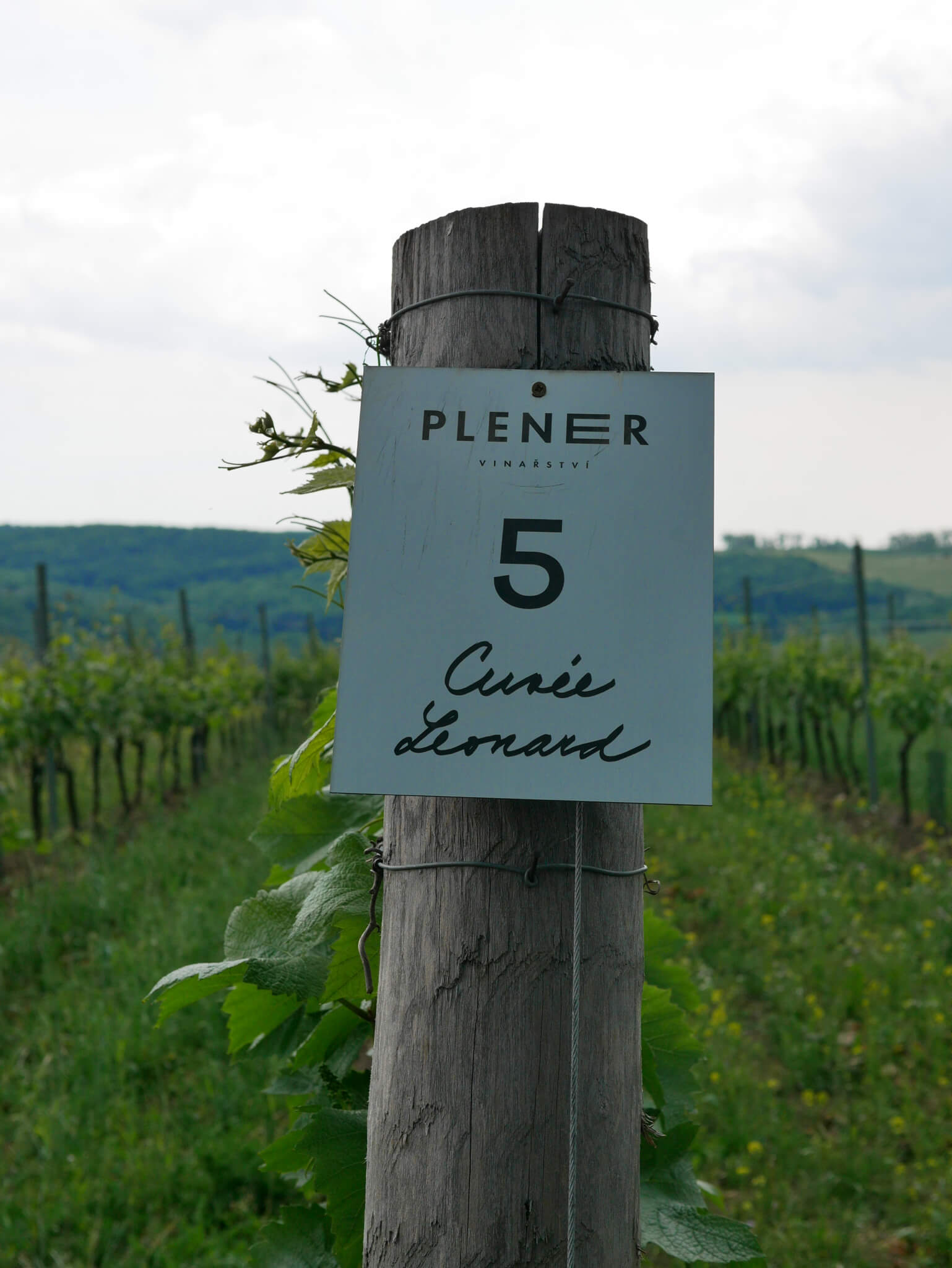 Where am I? When you take into account the passionate locals, great local wines and food to match,  you immediately think, maybe I am in Tuscany or Umbria maybe? What if I told you of a secret place that exists in the heart of Europe, matching Tuscany, frame for frame, plus, has an older history of wine making that dates as far back as the 3rd century BC when the Romans came from Vienna and returned with their rich knowledge of wine making. 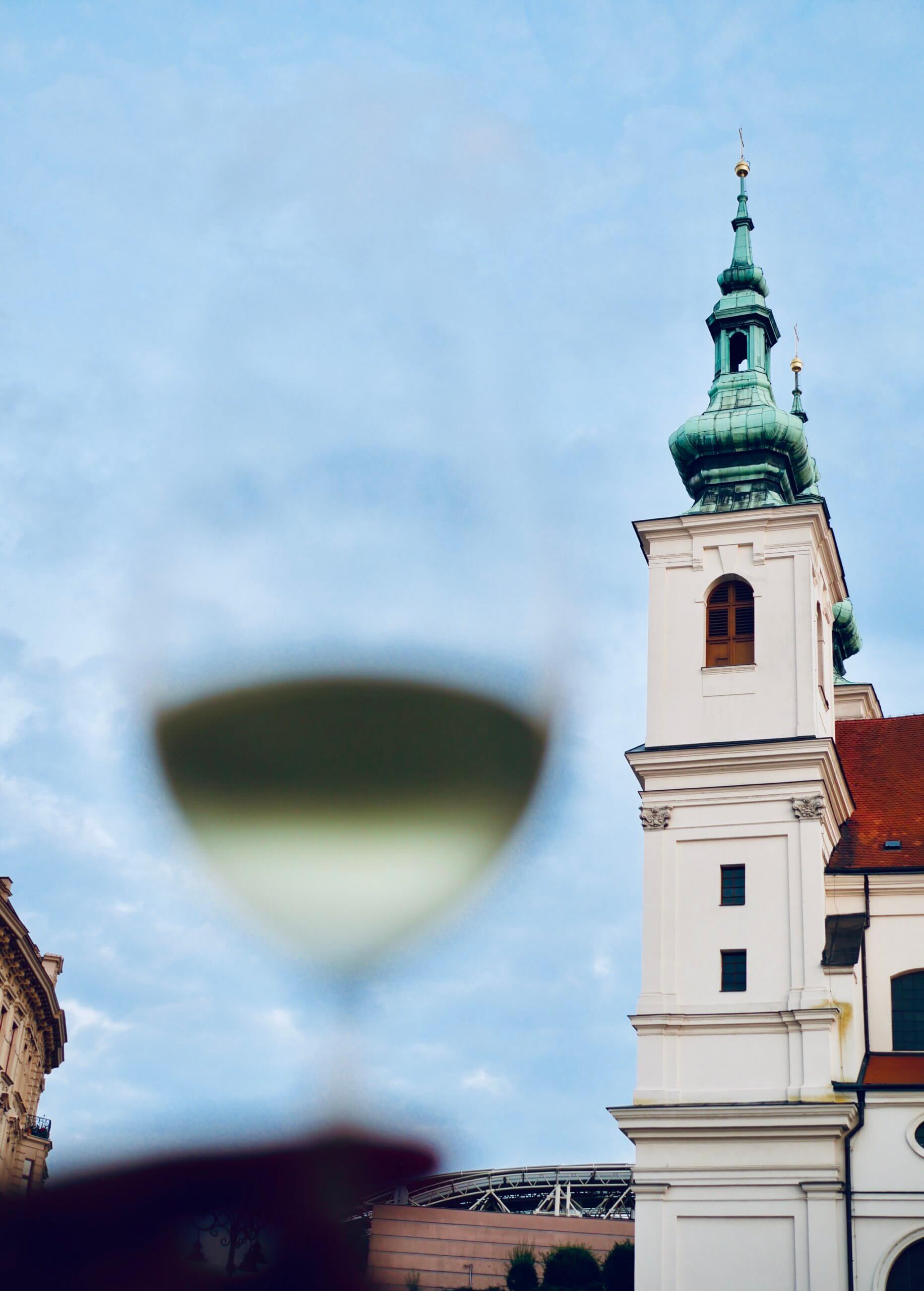 Time for the grand reveal. I’m in the region of South Moravia in Czech Republic. South Moravia usually isn’t on the tip of people’s tongues when listing regions in Europe known for their world-class wines. Perhaps it’s because Czechs want to keep it a secret and consume almost all of the area’s supply. 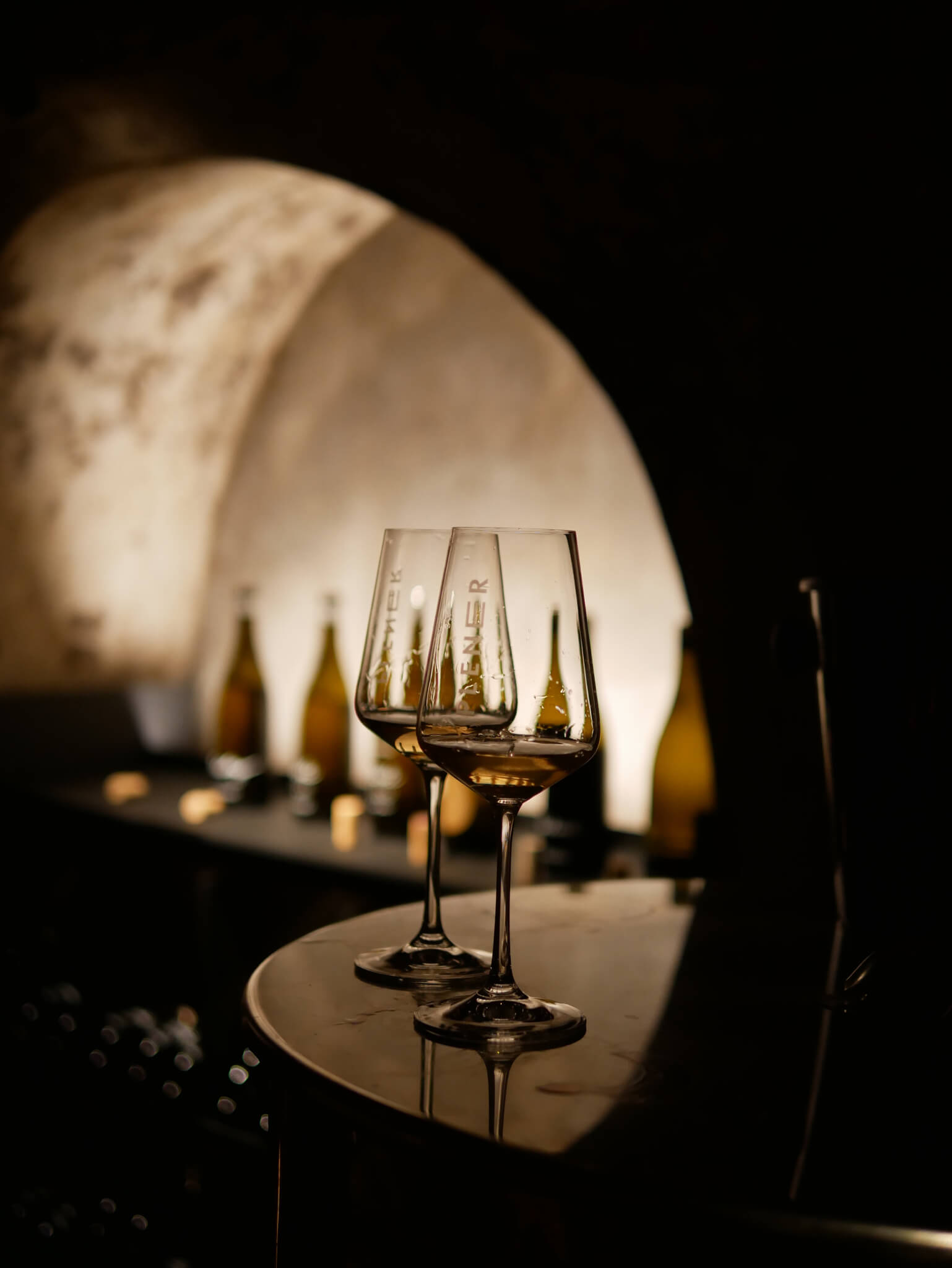 There are a few theories why the wines of South Moravia haven’t earned the fame of their more celebrated Austrian and Italian counterparts. Location could be one key factor. Tucked under the Austrian border, South Moravia has been a point of conflict thanks to its favourable geographical position on the western tip of the Carpathian Mountains and at the foot of the Danube river. Countless wars have disrupted winemakers and destroyed vineyards. In the 17th century, the Thirty Years’ War destroyed much of the vineyards in the area, which took the Moravians a century to replant. In the 18th century, Austrian vintners fearing their Moravian competitors used their political influence to suppress the Moravian vineyards. Then in the 19th century, the Liechtenstein royal family with their knowledge of the art and science of wine making,  revived the tradition of winemaking in the region. By the end of World War 2, however, the Liechtensteins were forced to leave Czechoslovakia.

The communists came next and pushed the wine industry back by light years in Czech Republic and the rest of the east. They cared very little about the heart and soul of wine making in general. Gorbachov for example, shortly after coming into power in 1985, in the name of promoting Russian sobriety destroyed over 533,000 acres of Soviet vineyards. In Croatia, under the former Yugoslav state’s communist government, only a handful of state-run winemakers were allowed to produce and sell wine at very low prices which made it impossible to make a decent living. This also led to a general decline in the quality of wine making.

Wine was considered a bourgeois beverage and so was replaced by beer as the drink of the common masses under communists. Prague and Pilsner still dominate the imagination when it comes to people’s perception of Czech Republic. That image is slowly shifting thanks to the efforts of young winemakers like Plener’s Dominika Černohorská and her business partner Ivo Marek who  work with their own fruit, hand harvest, eliminate any use of preservatives or chemicals to ensure that their wines represent the true essence of their region.

Back to my dream of a bed in the middle of a vineyard, drinking wine. I’m in the company of the lovely Dominika Černohorská in the stunning Pálava highlands which is the jewel in the crown of Moravian viticulture. The bottle that I am drinking from is Plener’s Cuvée Leonard, made with very popular grape variety, Muller Thurgau, which incidentally was the only wine served during Communist era.

‘We decided to work with this unfashionable grape and make something good.’

The result is a well rounded wine, unique and aromatic. A balance between modern and traditional winemaking technique, emerging, bold winemakers like Dominika are the face of South Moravia’s emerging dynamic wine scene. Her willingness to experiment, from choosing a Slovenian wooden egg as fermentation vessels to choosing local grape varieties, sets her wines apart.

Dominika’s wine cellar is one of the distinctive underground stone cellars that has been carved into the hillsides of the quaint wine town of Pavlov. With a population of just under 600 people, Pavlov represents the bold renaissance of winemaking in South Moravia- small production sizes and use of organic and natural wine production methods. 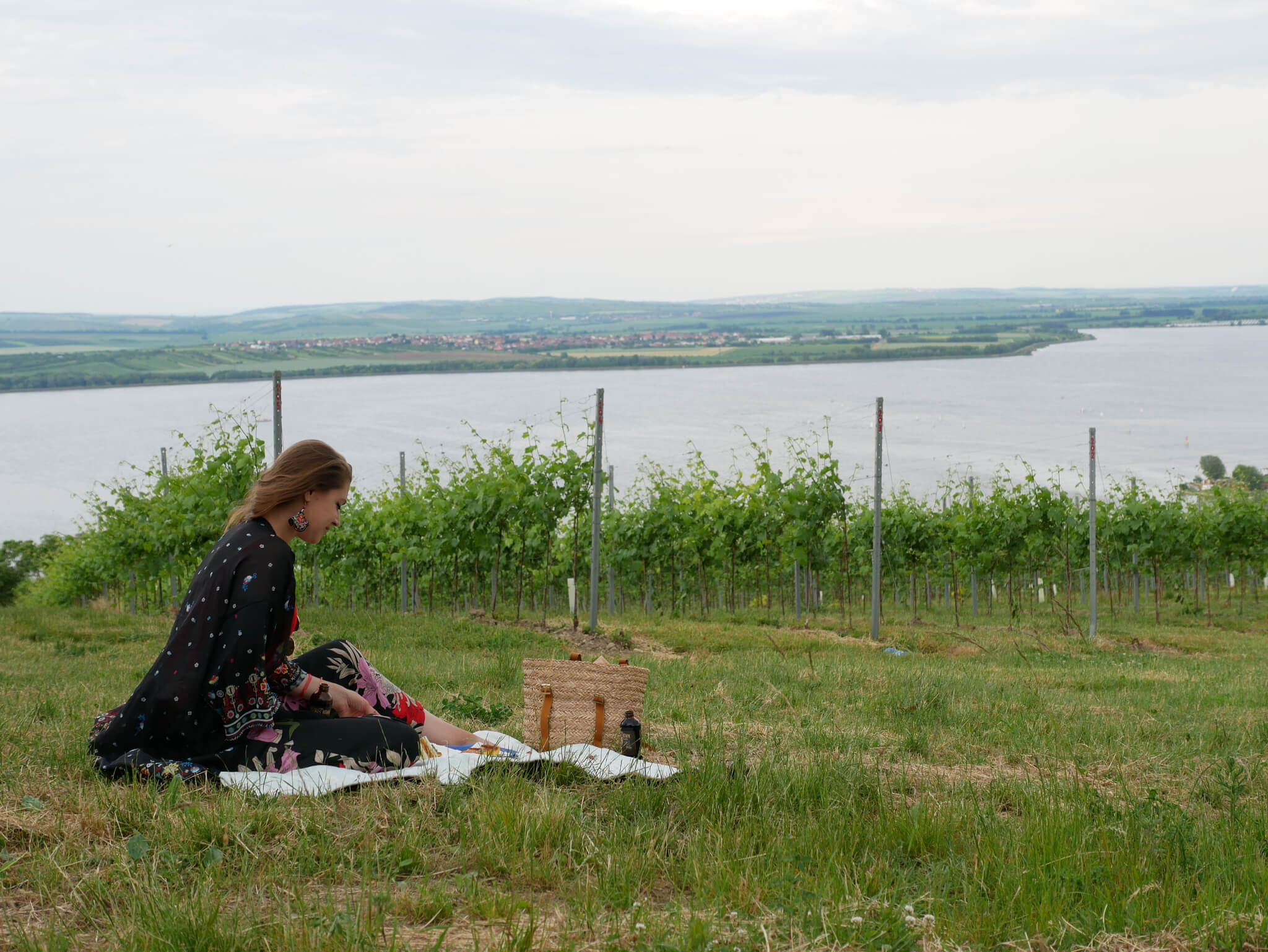 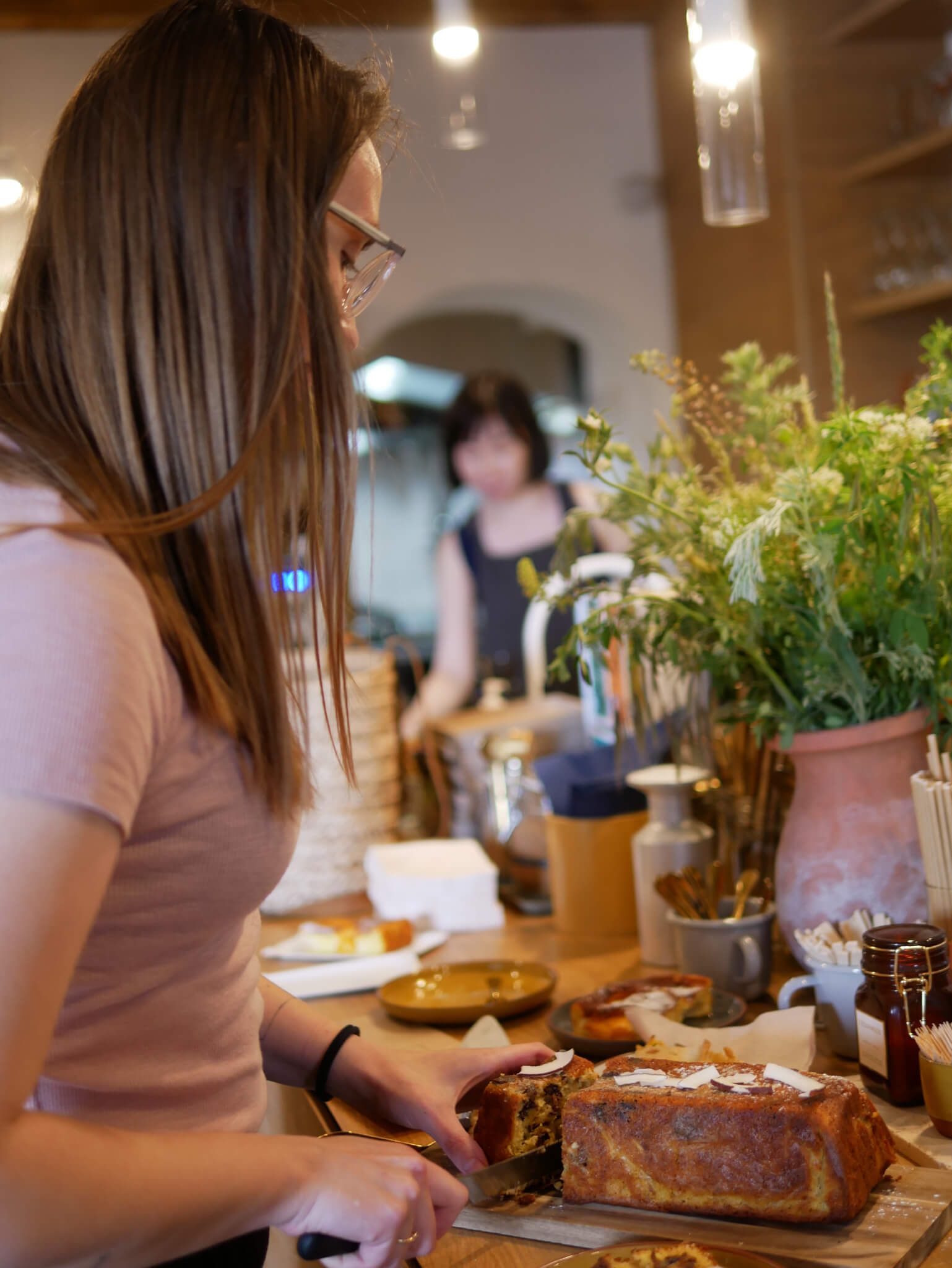 Unpossessing yet captivating, Pavlov is one of many beautiful wine towns you will discover in South Moravia. I am only here for the day but traversing the steep, winding streets of the town bursting with wine bars, cafes and beautiful restaurants in every nook and cranny, I wish I could have spent a few days just here, exploring all the wine cellars or going for a bike or hike to one of its many dramatic viewpoints overlooking the dreamy expanse of Lake Thaya. We do manage a hike before leaving. Our friend Ivo, who was our spiritual guide to all things South Moravia takes us to the scenic Marinada Cafe which offers takeaway picnic baskets to enjoy post hike on the top of the hill. 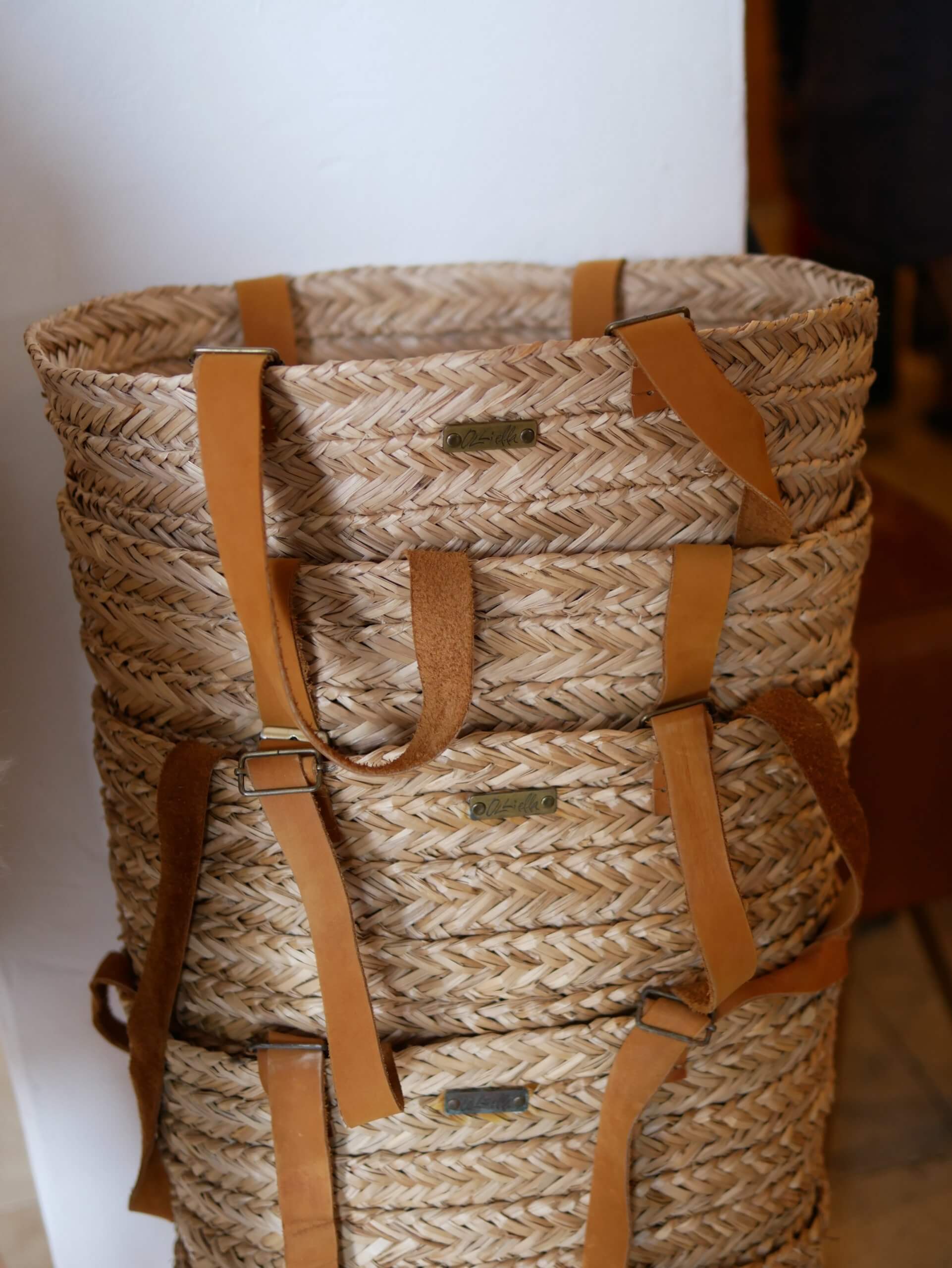 With a picnic basket, packed with cold cuts and cheeses, bottle of local wine and bread, we set off up the hill to the ruined outcrop of Děvičky Castle, perched high above the village and offering unforgettable views overlooking the village and the dreamy Lake Thaya in the distance. It is a moderate hike and the views from the top are breathtaking.

I bump into Dominika at Marinada Cafe when returning the picnic basket. She had been insistent we do the hike and I’m glad we followed her advice. We exchange a few words and then hop back in the car, back to Brno. I really liked Pavlov. I can see why the locals want to keep it a secret from us. I barely spent a few hours but it is that kind of place that feels familiar, you’re at home instantly. Whether that’s the magic of Dominika’s wine, or the warmth of locals, or maybe both, I will let you decide.

Top tip: While you are in the area, do not forget to visit the Archaeological Park in Dolní Věstonice  that offers an intimate look into the 30000 year old history of the region, with exhibits highlighting significant elements from the past. Displays include ancient mammoth tusks, carvings, tools, sculptures, and other remains from the first homo sapiens that inhabited the land.

Check out the Plenér Wines e-shop, or enjoy them at Atelier Bar & Bistro in Brno.

Our trip to Pavlov and Plener was possible thanks to a kind invitation from Czech Tourism’s Germany office and also the Tourism Authority of South Moravia. However, all the views represented here are entirely my own. Huge thank you to Marketa and Barbora from Czech Tourism and Eliška Křížová from Tourism Authority of South Bohemia for the invitation.

Special thanks to Ivo from Holiday Moments for the amazing trip and also Dominika Černohorská for being a great host. Thanks for the great memories and the wine.