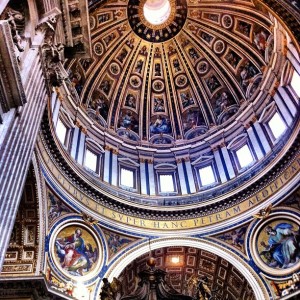 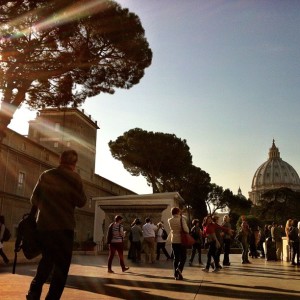 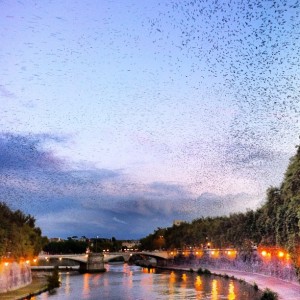 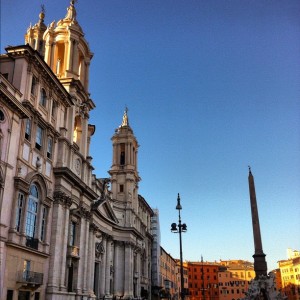 There’s something ethereal, almost illicit about the beauty of walking the streets of a city bathed in the light of dawn

Especially when those streets are those of Rome.

I step out of my HomeAway apartment and within seconds I am at Piazza Navona .

Devoid of it’s crowds, I enjoy the beautiful dormant desolation.

During the day the Piazza it reminds me of a stage for a crazy opera….

From wailing violins and guitars being played by Bangladeshi street musicians in ill-fitted suits to the raucous banter of the finger wagging, barrel shaped elderly locals…

Juxtapose that against the calm, long haired artists in the piazza.

Swirling their thin, elegant paintbrushes on a huge canvas, trying to concentrate amidst the madness of the stars of the show.

Hopping up and down like excited kids , making weird faces and strange body shapes in front of the fountain in the middle of the square.

Sadly I can’t linger at the Piazza and enjoy the rare moment of peace.

I walk briskly on.

I have a very important date with the Pope at the Vatican.

Well, I may get lucky and see him if he’s hanging around…

Plus there was the small matter of getting up close and personal with the Sistine Chapel-the greatest artistic masterpiece known to mankind.

I wind my way across the Tiber. A few blocks down I find myself at the meeting point with my Walks of Italy guide for my Pristine Sistine tour of the Vatican.

I usually am not the biggest fan of guided tours.

However, this tour was worth a special exception.

Walks of Italy manages to get their customers into the Sistine Chapel an hour before it opens to the public. Magic!

I line up in a short queue and in a matter of minutes, whisked through the security scanners and into a new country. Yippee…

I didn’t know what to really expect about the Vatican.

Sprawling over the small matter of a 108 acres, Vatican is the smallest country in the world.

Walking towards the Sistine Chapel the first thing that bowls you over is the room of geographical maps.

Detailed maps of each region of Italy dating back from over 400 years back are on show. It’s quite awe-inspiring.

For an era where there was no google maps or even maps, for the untravelled, this room must have been an exciting revelation.

After soaking in the beautiful central courtyard of the Vatican Museum and catching the first rays of sunrise, we make a quick march towards the museum’s greatest treasure- the Sistine Chapel.

Nothing quite prepares you for the moment you walk into the Sistine Chapel.

You’ve seen it in books or on TV but the actual thrill of being there is as good or even better than you would imagine.

The moment I walk in and look up at the ceiling of the chapel, there is a shiver down my spine as I scan my eye over the 350 figures that Michelangelo painted on the ceiling.

It was a real labour of love and dedication. In all it took 4 years for Michelangelo to complete his masterpiece. That too, he painted under a secretive veil of scaffolding which meant that no-one, not even the Pope could observe the evolution of this grand masterpiece.

Given that Michelangelo had never painted a frescos before the Sistine Chapel ,makes this an even more amazing achievement.

I was grateful for the chance to have come earlier because as we wound our back through the chapel an hour later, the place was heaving with tourists bringing an entirely different complexion to the place. It’s almost impossible to stand still-I had to keep moving.

Out back into the grounds of the Vatican walking in the mellow Autumn sunshine there is still one more amazing treasure that awaits me.

Spanning two of the great architectural periods of Baroque and Renaissance, it took 13 architects from Raphael and Michelangelo , 120 years in total to complete the creation of St Peter’s Basilica.

When you go inside, it’s hard not to be dumbstruck by the scale and grandeur of this church. It’s huge. It’s roughly the size of 2 modern day football pitches.

The canopy is 100 foot –ten storeys high. As revealed by our guide, given the amazing geometrical proportions of the building , it never appears that huge inside a real feat of the architects and their planning.

Then you have the stunning expanse of enamel and gold mosaic across the central dome. When measured, the mosaic covers an area of 20 acres!

By the time I walk out of the Basilica , the sun is high in the sky and it’s approaching noon. The past 4 hours have really flown by.

I feel rich, as if I just won a competition or a holiday.

I’ve seen the world’s most stunning masterpiece and probably the world’s greatest church and I still have the good part of this beautiful Autumn’s day to enjoy Roma.

Huge thank you to Stephen, Loredana and the rest of the Walks of Italy team for this great opportunity

By Kate McCulley, Editor AdventurousKate.com   Looking more like a retro hipster lounge in Brooklyn than an Icelandic abode, Kex Hostel is one of…