There is no greater pleasure than the joy of renewed pleasures

This is especially the case when it comes to Edinburgh,

It’s a never-ending box of delights.

Over past few weeks, I’ve been taking advantage of the unusually mild weather and walking everywhere in the city .

In the process trying to shake off the excesses of the Xmas festivities and Winter stupor.

I realised that despite my exciting travels across Europe, I’ve missed Edinburgh. 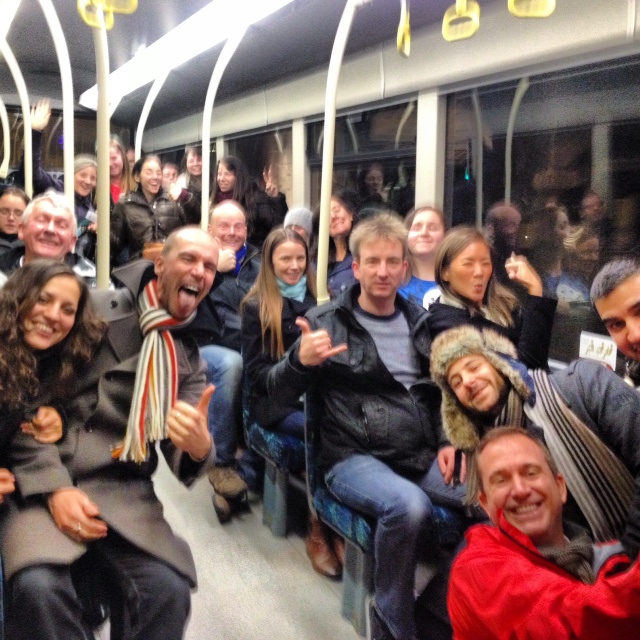 Blogmania!: Bloggers storm the No 12 Lothian Bus enroute to the Old Town from Haymarket

Last week, I was joined by 20 bloggers came from all over the world.

Blogmanay is a new annual initiative where bloggers are invited to experience and blog about Edinburgh’s Hogmanay– the only festival in the world that celebrates New Year’s Eve.

For me this project has been the perfect excuse to rediscover Edinburgh.

Be a tourist in your own city – how cool and crazy is that? 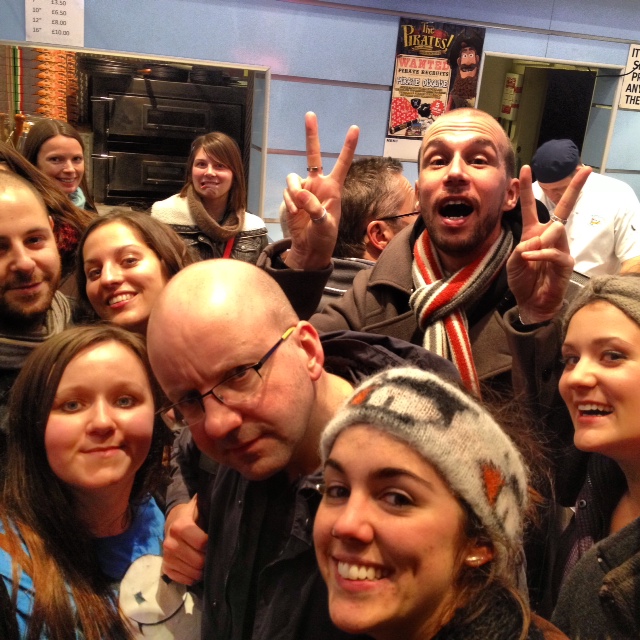 Bene’s -Fish and Chippy. Delirious scenes of happiness amongst my Blogmanay buds after an amazing fish supper.

I took my blogger buds to an old favourite Bene’s– an Italian Scottish fish and chippy in the Canongate area of the Royal Mile.

I’ve been all over the world but nobody quite does fish and chips like Lorenzo and Maria at Bene’s.

The chips are thickly cut, fried in lard and taste heavenly.

The fish is fresh.

It’s fried in a nice, flaky batter than melts in your mouth.

My friends loved the ‘fish supper’ experience and also meeting Lorenzo and Maria-two of the warmest, nicest people you could meet in Edinburgh.

A moment shared, a memory created for life. 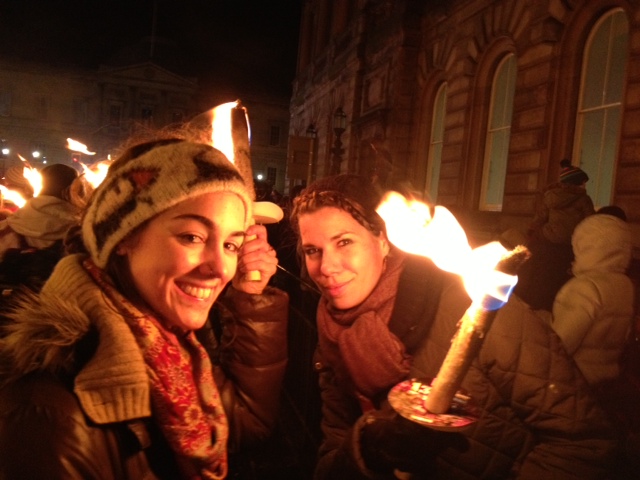 Flamin hot!: Flora and Kirsten at the Torchlight Procession

Edinburgh, by night is just another world.

I got reminded not once but twice of how beautiful the city looks at night thanks to Edinburgh’s Hogmanay.

On the 30th, I had the unique chance this year to be a torchbearer in the Torchlight procession.

The event draws on Scotland’s Viking heritage and pagan celebrations , the thankful passing of the Winter Solstice.

In my 7 years of living in Edinburgh strangely I had never attended the torchlight procession. Call me an apathetic local.

The procession started in Chambers Street, right in front of the newly refurbished National Museum of Scotland.

Urged on by the rattle of drums and the shrill voices of the hearty Shetland’s Up Helly Aa’ Vikings, I absorbed myself into a swarm of 40000 locals.

Walking down some of the busiest streets in the city, swimming in this sea of flaming torches feeding off burlap and beeswax was kinda surreal.

I had to pinch myself. I felt I was in an alternative reality.

It was wonderfully meditative and peaceful- an almost stunned silence and sense of awe amongst everyone walking in the procession.

Fire, even in this age of digital 3D enlightenment , still has the ability to create a sense of wonder and enchantment amongst us just like it did with our forefathers.

Talking about being enchanted , there are few sites can send a shiver down my spine than the sight of Edinburgh Castle at night, atop of an ancient volcanic plug, glowing in the distance. 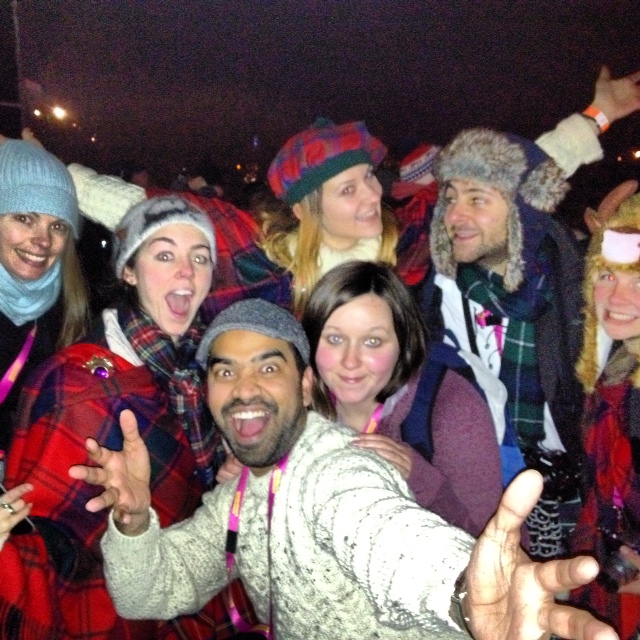 Hello 2013! Blogmanay Bloggers usher in the New Year with their usual crazy expressions

Set that view of the Castle against probably the most spectacular New Year’s Eve fireworks display I’ve seen , that too viewing in the company of good friends and you have a moment of true perfection.

I’ve been to the street party a few times and it’s always such a well organised great event with people from so many far-flung corners of the world.

This year with the 5 stages, there was a fantastic range of new and old bands and variety of entertainment. 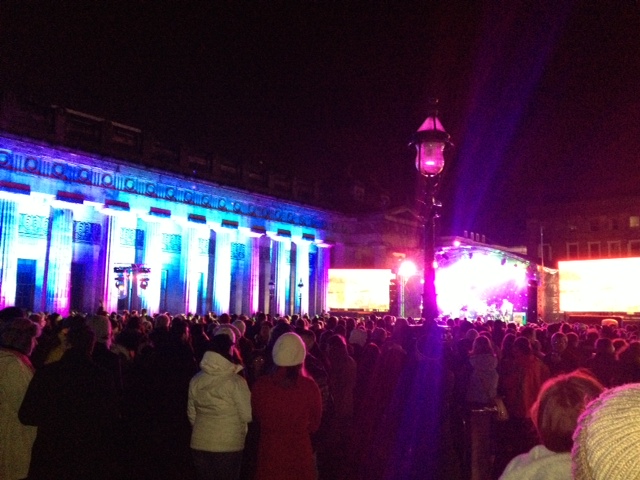 I headed down to the outdoor Celidih arena which was set up in front of the beautifully lit up Corinthian pillars of the Gallery on the Mound.

I’ve been to a few Celidih’s in my lifetime but always never seem to remember any of the dances.

At least, I looked the part on the night in a kilt which was a historic first for me! 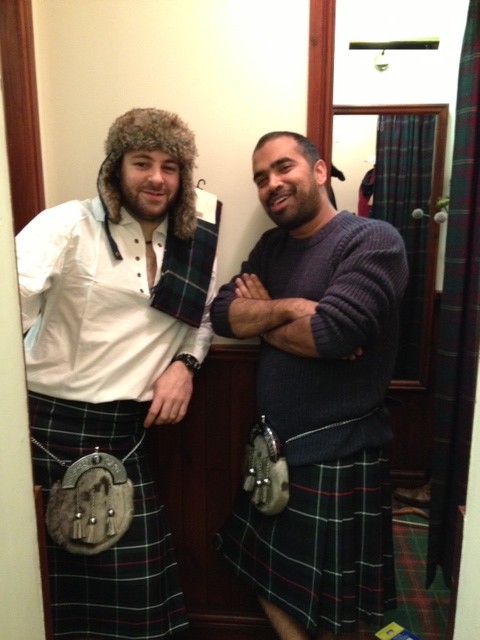 Peter and me looking the part hopefully in our new kilts!

Yes! In 14 years of having lived in Scotland, I never have worn or been tempted to wear it, not even for my graduation ceremony at Abertay.

Thanks to the awesome people at the Edinburgh Woollen Mill, some of the bloggers all got the chance to get ‘kilted’ on the afternoon of the 31st.

I just wish they were more hours in one evening. 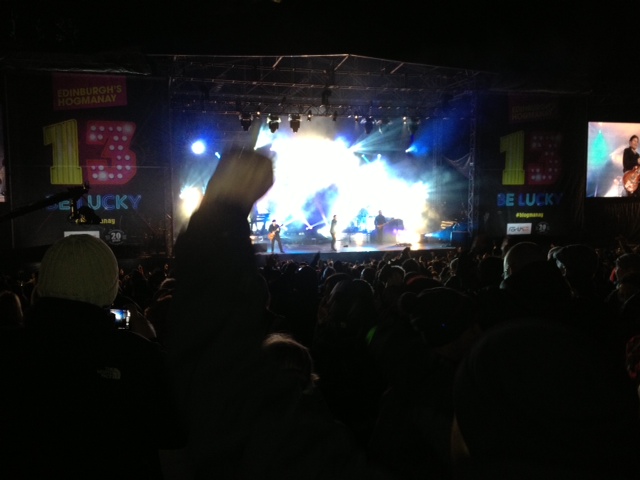 The night just passed so quickly.

Guess it’s a sign of having a great time.

On the 1st day of 2013, I woke upto probably the most beautiful January Winters day in living memory.

With my body weary from last nights festivities, a good long walk in the park and fresh air was just what the doctor ordered so hooray indeed for Dogmanay! 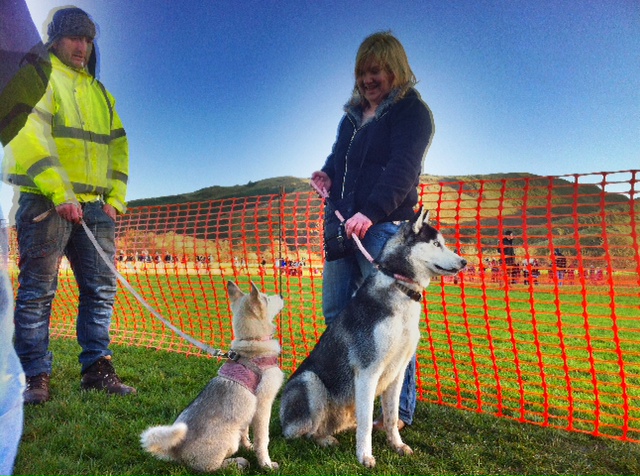 Hooray for Dogmanay: Beautiful Huskies at the event

I don’t think I’ve seen so many beautiful dogs in one square mile.

After Dogmanay, it was time for the hair of the dog at the Jinglin Geordies on Fleshmarket Close.

Time to quietly reflect on the events of the last few days and catchup on the madness of earlier, when some bloggers braved the natural elements to go for the Loony Dook in South Queensferry.

I constantly marvel at the ability of the creative ‘artizens’ of Edinburgh who keep coming up with new concepts and events, reinventing the city landscape in different ways within our psyche.

Thanks to the year round calendar of amazing festivals-from Edinburgh’s Hogmanay to next week’s Science Festival to the summer Fringe and International Festival, there is always an excuse for not just tourists but also locals to ‘revisit’ and rediscover their city.

So don’t be an apathetic local like I used to be.

Get involved with the festivals, raise your cup of kindness for 2013 and rediscover the passion for your ‘auld acquaintance.’

Disclosure: This campaign is brought to you by Edinburgh’s Hogmanay and is sponsored by Visit Scotland, ETAG, Edinburgh Festivals, Haggis Adventures and Skyscanner . The campaign bloggers were sourced and managed by iambassador. As always, all opinions expressed here are entirely our own.