Located in the North Rhine-Westphalia region of the country Dortmund proudly boasts its status as the country’s football hauptstadt. However, this former industrial giant also has a lesser known side where you can discover a great diverse cultural scene, beautiful green spaces to relax in cool hip neighbourhoods like the Kaiserviertel plus there is a fantastic food and drink scene. In this guide to the best things to do in Dortmund, you will get a feel of what this city has to offer, from its incredible football and industrial culture, to the best places to eat & drink in Dortmund.

A popular recreational spot in the city is the broad swathe of greenery comprising Westfalen Park. Covering an expanse of 70 hectares it is one of the largest inner city parks in Europe. Some of the key places to visit inside the park include the Florianturm or the TV and Radio Tower, home to the German Rose Society. The Kaiserhain pond, the Forest-of-the-Mills pond with its central open air stage are other places to visit. The park is strewn with beautiful flower beds, fountains, geese, many kinds of birds and wildlife. An ideal place to hike, ride a bicycle or simply enjoy the serenity of nature on a park bench. 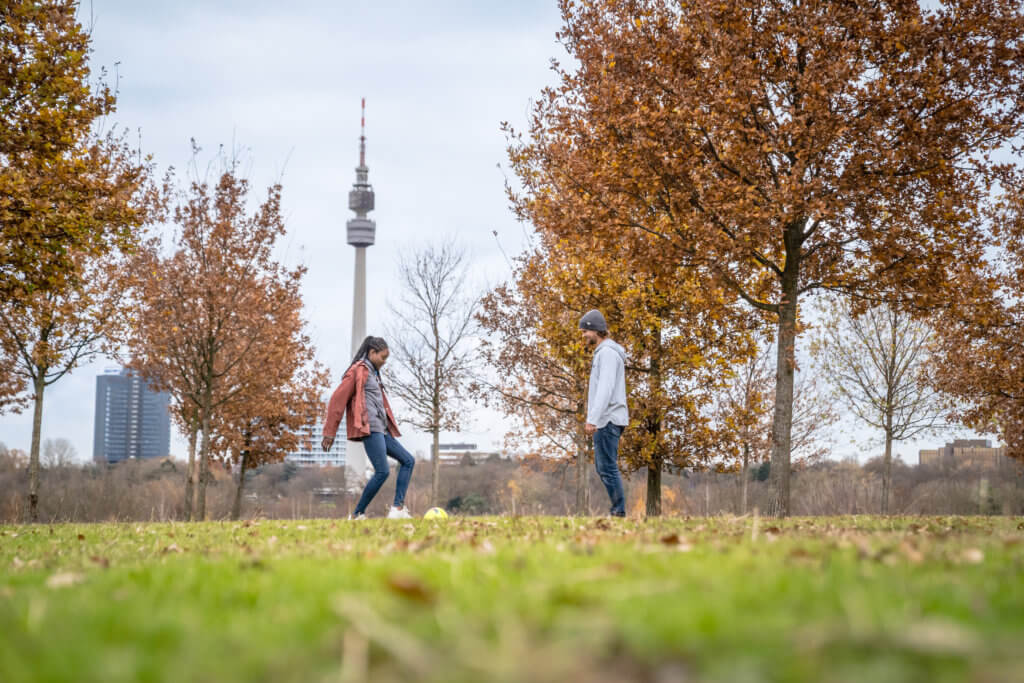 The Florianturm is a key highlight of a trip to Westphalen Park and is the landmark TV and Radio Tower. Built in 1959, at the time it was the highest free standing structure in Germany, standing tall at 720 feet. It has a construction design resembling a concrete chimney, with a tapering top. At various levels along the tower there are various features, like a revolving restaurant, upper and lower observation decks and operation rooms. It is the perfect place to gain an aerial view over Dortmund. 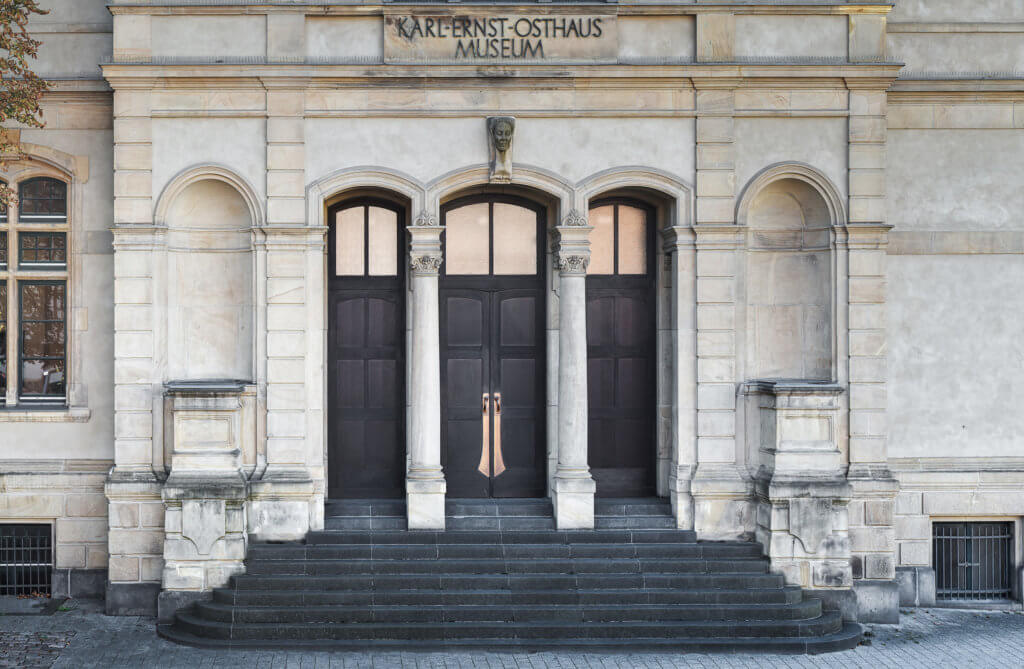 The present home of Museum Ostwall is a seven storey tower, known as the U-Tower. It is the museum of modern and contemporary art in Dortmund. The museum’s collection was started in the 1940’s and was moved to the current location around 2010. Some of the treasures of the collection include paintings, sculptures, photographs and objects of interest. Pieces from the collection that are not to be missed include works from Wassily Kandinsky, Franz Marc, August Macke and Alexej von Jawlensky. The Gröppel Collection is another museum highlight. Graphics from Joan Miró, Chagall, Dali and Picasso, also grace the museum. 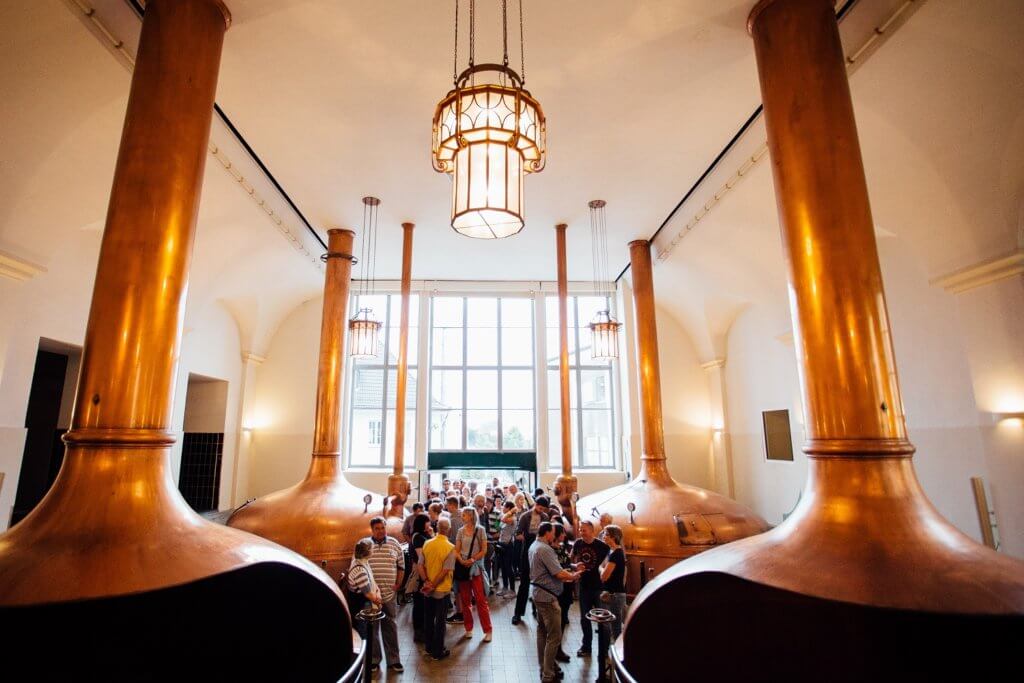 The Brewery Museum of Dortmund is a museum dedicated to the history of beer brewing in Dortmund, a tradition that dates back to the nineteenth century. Beer tastings and tours are available. The museum is open all days except Monday, although museum tours occur on Sundays. Some of the interesting exhibits on offer include the chance to view vintage brewing equipment and curios from the heyday of beer making. Vintage beer dispensers that dispensed a beer a day to factory workers, bottling machines , packaging and old advertisements are all on display. Dortmund was the home of more than 30 breweries with the glory days of beer making happening in the 1950’s. Anyone interested in the process and history of making beer, will find this an enlightening experience. 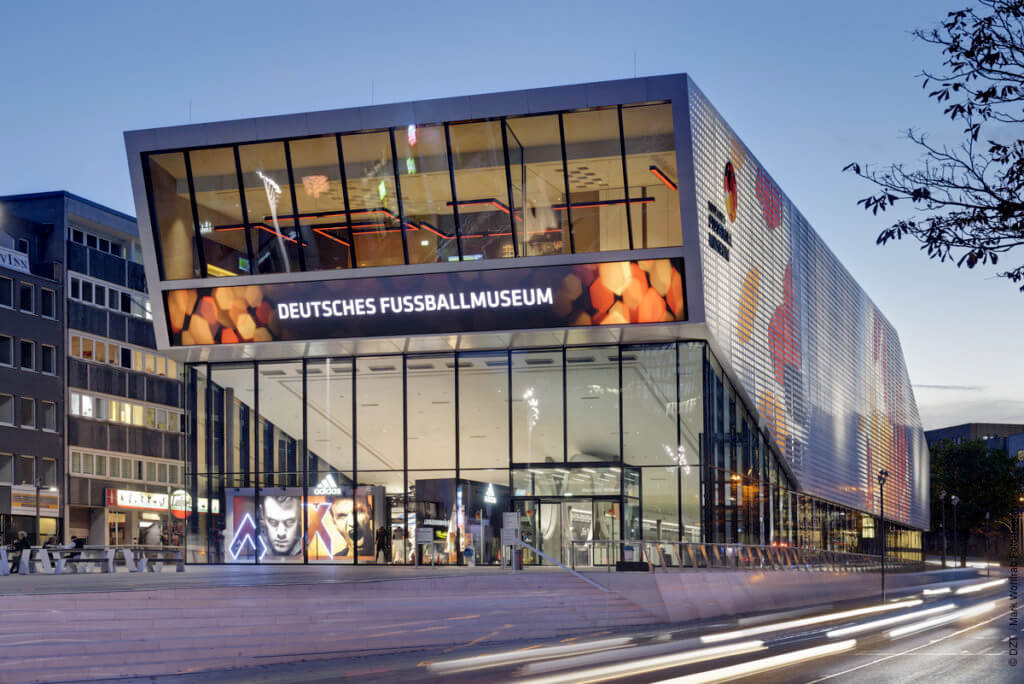 A good place to start your footballing pilgrimage is the Deutsches Fussball Museum in Dortmund. This vast shrine to the nation’s passion and obsession is a place of pilgrimage not only for German football fans. Inside a futuristic building next to the Hauptbahnhof is an emotional multimedia and sometimes interactive tribute to the game and Germany’s role in shaping its history. Learn about stars such as Franz Beckenbauer, relive historic matches or fancy yourself a commentator. The treasure chamber holds replicas of the four World Cups and three European trophies won by the Mannschaft (Germany’s national team). Online tickets are a couple of euro cheaper.

If you can’t get tickets to a Dortmund game, the next best thing is to get a tour of the stadium, the Signal Iduna Park. The Signal Iduna Park on Strobelallee is Germany’s largest football stadium with a capacity of exactly 81,365. The stadium is often referred to as the “temple of German football” thanks to the proximity to the pitch, the acoustics thanks to its complete roofing and the unique passion the fans in the Ruhr have for the beautiful game.

The tours allow you to have an extensive look at the stadium’s facilities that are otherwise off the limits. These include the VIP areas, tunnels that lead to the pitch, club museum, press room, and more. The stadium tour is also a chance to to witness the southern terrace, known as the “Gelbe Wand”, “Yellow Wall” where 24,454 fans make themselves heard on this stand.

These tours are run at specific times of the day. Even though there is no special need to register for the tours in advance, it is better that fans do the same if they have special requests. All the tickets can be purchased online and it is not possible to choose a date when matches are held. One can expect the tour to last for around 90 minutes in the basic version, while it would extend to 120 minutes in the PLUS version. 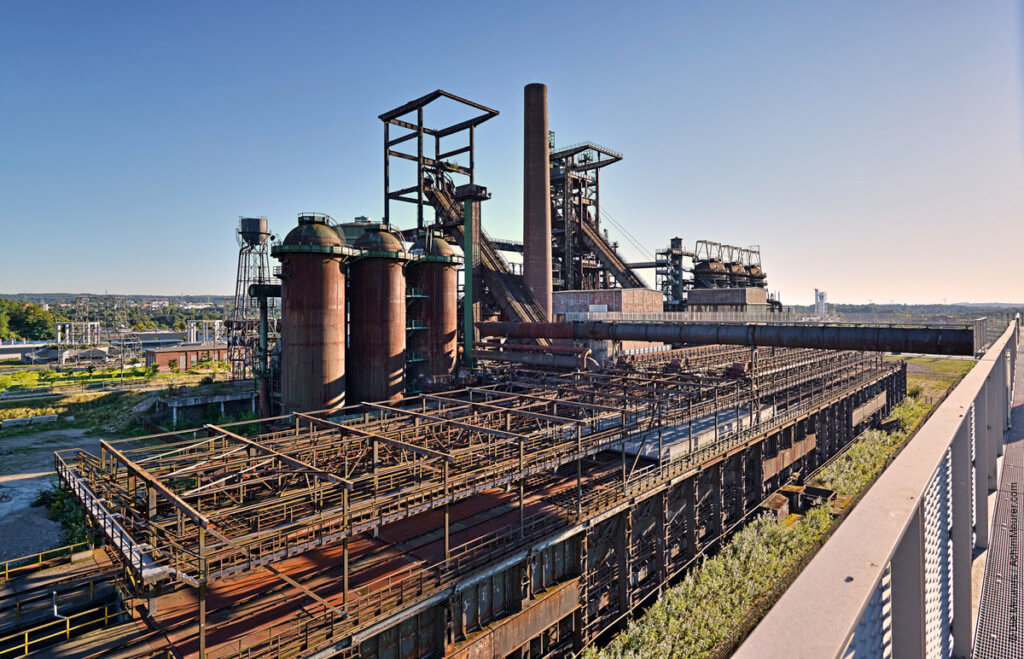 7. Explore industrial heritage on a skywalk tour through Phoenix West, a former steel works in Dortmund

For over 160 years, the industrial complex of Phoenix West was an icon for the city of Dortmund and the region of North Rhein-Westphalia, whose economy was based on coal and steel. Steel production in Dortmund ended with the closure of Phoenix West in 1998 and Phoenix East in 2001. The former blast furnace works are a reminder of Dortmund’s rich industrial history.

You can enjoy amazing views of the entire Phoenix West industrial heritage complex and the dramatic Dortmund skyline, thanks to a 26-meter-high steel footbridge built over the old blast furnace gas line.  You can also see the stadium, the Florian Tower in Westfalenpark and also the Bergmann brewery.  The Skywalk and the entire Phoenix-West plant are currently only accessible as part of guided tours. Guided tours take place on fixed dates, the number of participants is limited. Tickets can be purchased from the city of Dortmund’s tourism portal. The current price for a tour is 15 euros per person, but experience has shown that the tours are always booked out quickly.

Where to eat and drink in Dortmund 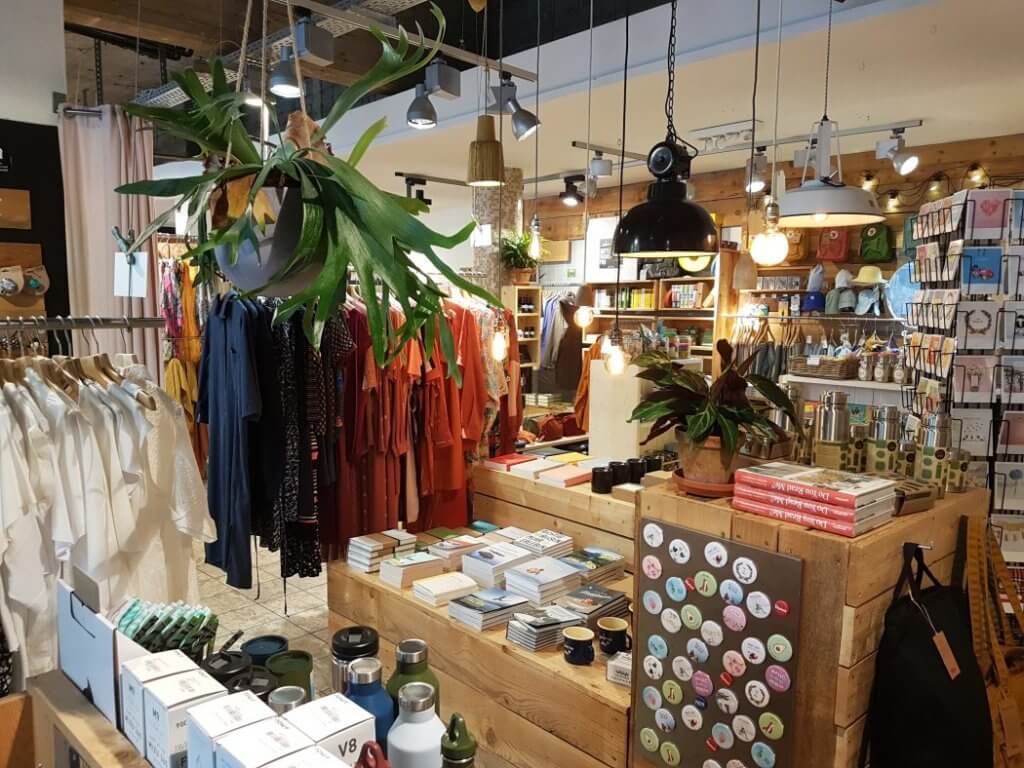 If you have time to kill before the game and want to get a snapshot of what local life is in Dortmund, definitely make some time for Kreuzviertel which lies on the way to stadium. It is a colourful neighbourhood brimming with hip cafes and restaurants, lots of independent shops plus a good concentration of bars.

We stopped by kieztortchen, a cute cafe with a very nice outdoor terrace which serves really good cakes plus great coffee.

If you’re looking for a gift with a difference, then the concept store Unterhaltung is a great place to drop by. You will find a whole range of items here, from designer bags and rucksacks to coffee table books, candles, local organic chocolate, craft beers and gin – you will be spoilt for choice.

We did not have time for food but locals recommended Babuschkas Kitchen (Kreuzstraße 69, Dortmund) for their hearty Ukrainian food, from pancakes with different fillings to dumplings and borscht all served in bright, cheerful interiors.

9. Tip: Enjoy a snack and/or a beer at Bergmann Brewery in Phoenix West

Dortmund and beer. It’s like foot and ball or fish and chips. Dortmund was once home to several breweries which earned it the moniker ‘Bierstadt’. While the people of Dortmund no longer spend their monthly wage packet at the pub, beer still plays an important role in the city. While there has been a marked decline in breweries, in 2005 a new independent brewery was born that now dominates the scene in Dortmund: Bergmann beer.

Matching the Ruhrpott DNA, the beer is advertised with the slogan ‘Hard work, honest reward‘. While the miners are no longer here, the culture of the feierabend after-work beer is still popular which is why Bergmann built a brewery right next to the old blast furnace plant on PHOENIX West in Hörde.

As a visitor, you can not only take part in tours of the pitch-black painted brewery – and of course have a sip or two. There is also a food truck on site Thursdays through Sundays .

This post was produced with the kind support of Germany Tourism and Ruhr Tourismus GmBH but all views, opinions are entirely my own.

Warm sunshine all year, pints of lager for a euro and lots of sunburnt Brits – that’s Tenerife. Although a small part of…