“Journeys are the midwives of thought. Few places are more conducive to internal conversations than a moving plane, ship or train.” 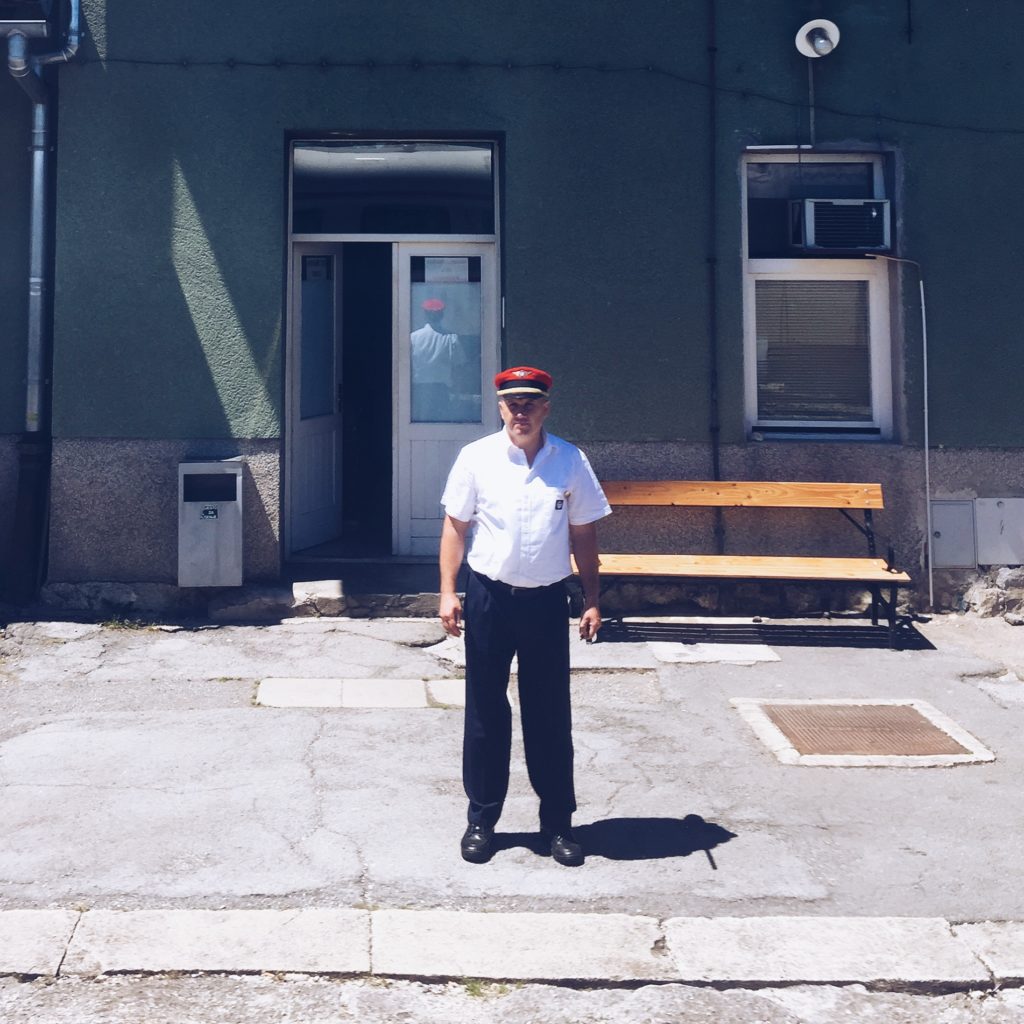 No one takes the train in Croatia, we were told

I had three options to go to Zagreb.

Take the plane. Get up at the god unearthly hour of 5am.

Catch the 6.15am Croatian Airlines flight to Zagreb.

I was told booking in advance you can snag fares for half that price.

I should know better right? 🙂

Buses in Croatia was the best, cheapest and most efficient option I was informed. Even though I no longer have motion sickness I still feel find bus rides to be nauseating. Idea of being cramped up in a seat for 5 hours smelling piss , sweat and also sweating bucketloads did not appeal to me.

I have always loved trains. It gets you from A to B with minimum fuss. No stress over transfers to and from airport, Check in queues. You can stretch out you legs and swing your elbows. Plus generally in most cases, trains are faster than planes and buses.

However in the case of this train, we were looking at 6 to 6 1/2 hour trip to Zagreb from Split.  Train speeds rarely topped 60 kmph.

As one does, I googled to see reviews of the Split to Zagreb train. There was hardly a mention on the web. One post dating back to 2001 promisingly refers to the scenic nature of the train ride. 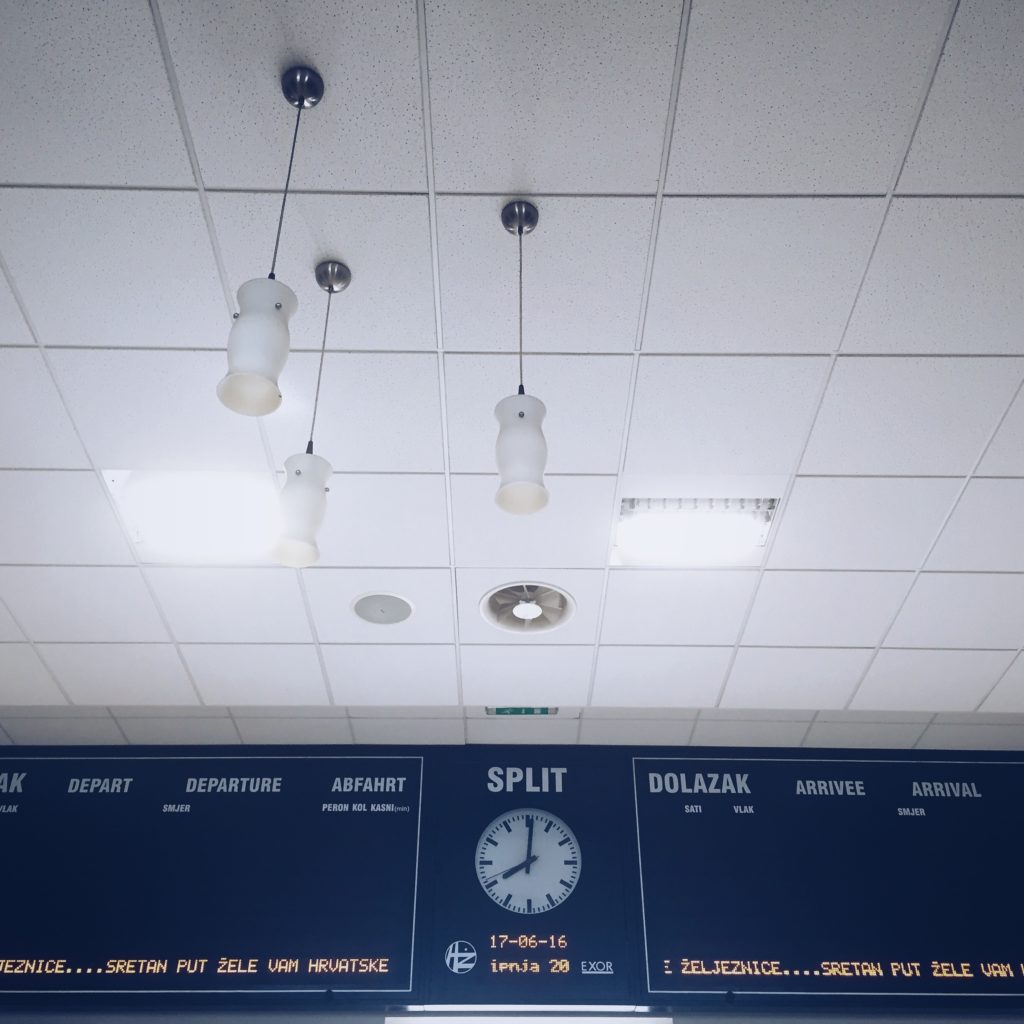 The train station in Split is a tough one to spot.

Usually train stations in every city have always a grand entrance and sign. However the humble concrete edifice of Split train station lies in relative obscurity, hidden behind the currency exchange office and the umpteenth shop selling counterfeit Croatian national football shirts and Donald Duck tees.

Tucked away to the right of the train station, the bus station stands out proudly with hordes of sun bleached tanned backpackers. A cursory glance reveals multiple destinations you can go by bus in this part of the world, taking you as far afield as Ljubljana and Belgrade.

The train station in comparison only runs a thrice daily service from Split to Zagreb including a overnight ride.

When I popped in, late on a sweaty June afternoon, the station was empty beside the lone cashier at her desk. She thankfully spoke great english and with minimum fuss issued our tickets to Zagreb. At  116kn per person, its a steal. If you have an Interrail pass, you just have to pay for a reservation fee which is 16 kn.

At the time of departure of 8.30 am the sun is already stinging the back of my neck as I soldier onto the train.

Before boarding, a silver haired conductress check our tickets diligently. Gruffly, she asks if I have my reservation. Satisfied, she then points me to my carriage and seat. Contrary to what I had read online, the train is air conditioned , clean with comfortable seats upholstered in a blue check cloth pattern. I settle into our reserved seats and the train with a jerk, chugs into motion.

Time to split from Split. 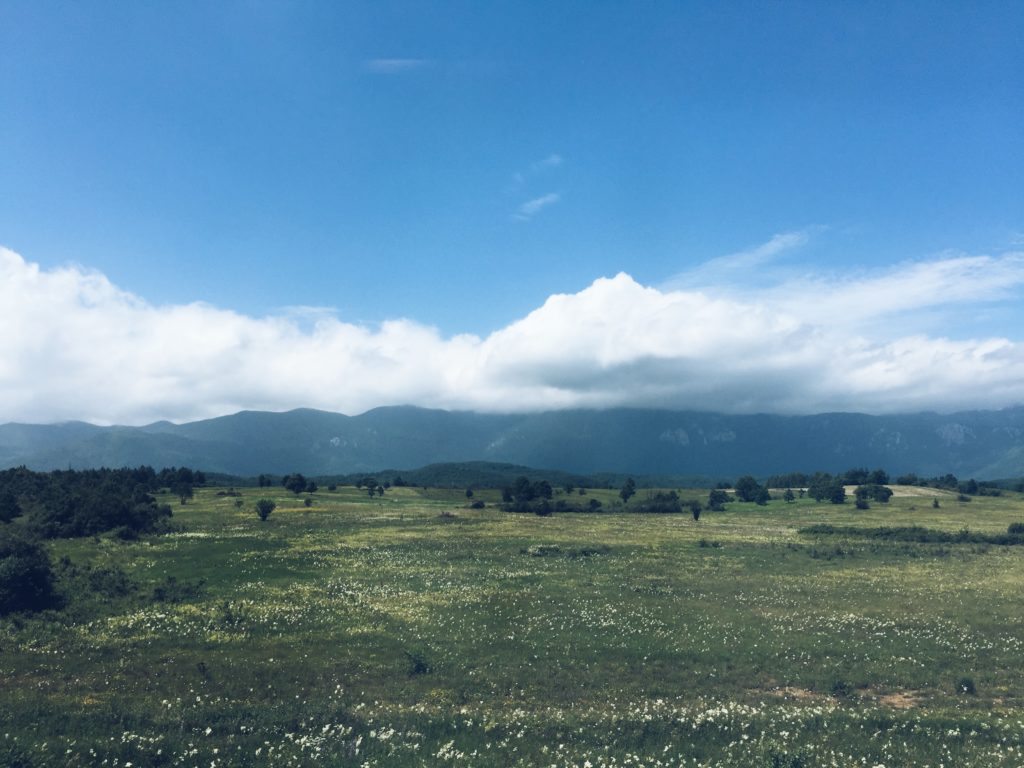 Soon the train is swimming through a sea of green and red: olive trees and bright red terracotta roofs that make me nostalgic about home. Portugal.

I count one, two, three, four maybe 5 elegant church spires in the sea of roofs. In the background lies the deep blue Mediterranean, clouded in a misty morning haze.

To the right of the train , I see empty green hills rise and fall into obscurity.

The train is chugging along at a moderate pace of not more than 25-30 mph. After a few laps, suddenly it kicks into gear and starts clambering up the steep green hills.  We’re soon at an elevation of probably 400 metres. My ears pop. 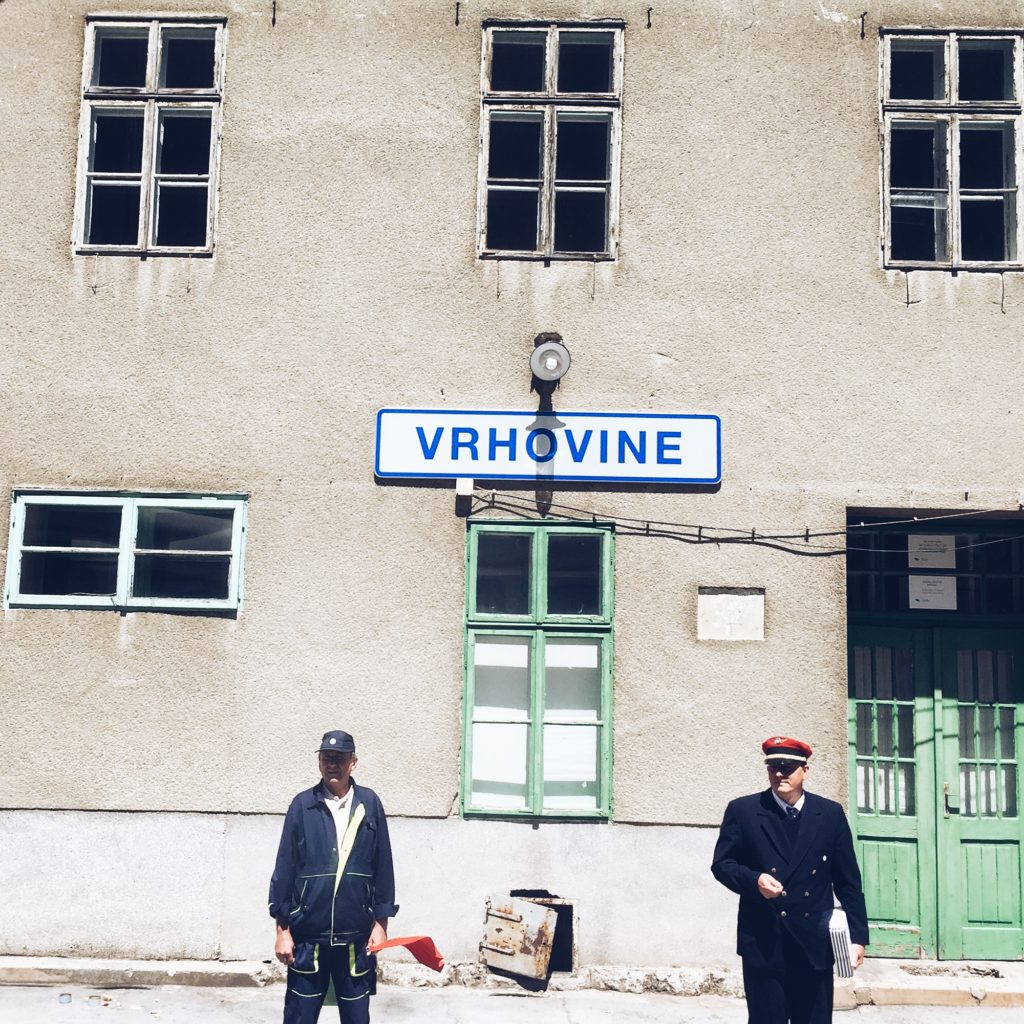 We saunter past desolate stations with glorious sounding names that sound like the outposts of a once upon time glorious empire.

I wave my hand each time at the lonesome station master on the platform like an eager extra on the Railway Children. Standing tall and proud in their neatly ironed white shirt, black trousers and shiny red cap they look at me half bewildered. My enthusiasm remains unpunctured and at my fourth or fifth attempt, I get a half embarrassed wave back.

Hour into a journey, I feel my body relaxing. There’s something quite therapeutic seeing wide open , empty spaces. Big green swathes of greenery float past my big wide window. Its almost the same minimalistic feeling I get when I go to a modern art museum. More than the art, I enjoy the beautiful open spaces for your thoughts to run, wild and free.

The train has left the hills behind and is winding through a wide valley that is dotted by a few red roofs. In the horizon I spot a row of wind turbines twirling away.

The train makes a stop at another grand sounding station: Perkovic. A middle aged couple clamber on, groaning under the weight of umpteen suitcases. The man huffs and puffs as he loads each suitcase into the rack while the wife hands on hips looks on with an impatient glare. Probably they are filled with bottles of rakiya , the potent local plum brandy and home-baked goodies for their long suffering daughter in the big smoke. Or probably they are escaping the boredom of the country and seeking the frivolous thrills of the city. Whatever their motive, they look almightily relieved. A train service like this must be a vital lifeline for remote communities like this.

After another sedate hour of rolling through wild lavender fields we reach Knin. As the station comes into view I see the historic Knin fortress come into view. Knin has a long and very grand history. A roman military camp dating from 1st century BC, the city also served as the capital of the medieval Kingdom of Croatia.

Next stop I spot is Zrmanja. A quick google reveals that the Zrmanja River with its wild west canyons is fantastic for white water rafting

Just when the slightest sense of boredom was kicking in, north of Zadar the skies darkened ominously. The wind started howling against our window and visibility was pretty poor. The train kept chugging bravely on as the rain started hailing down furiously. Then as suddenly and violently the rain came, it disappeared. A blaze of sunshine, clean blue skies and lush green fields came into view. 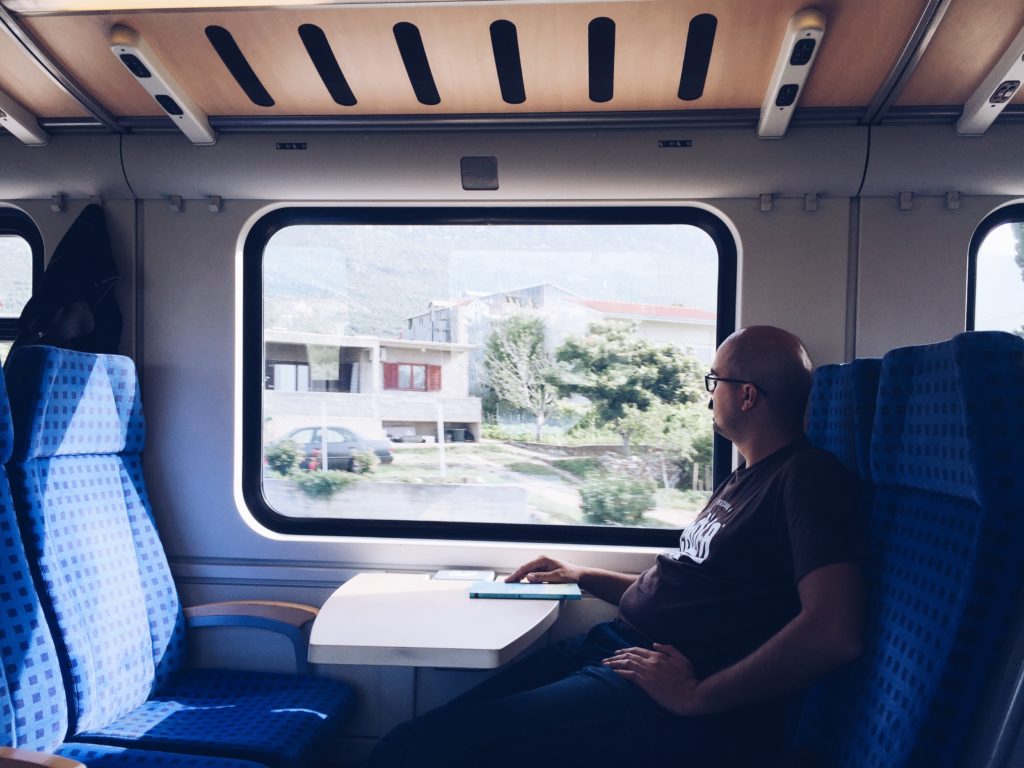 My body relaxes and for awhile I kind of go limp and just silently absorb the passing images. It feels very meditative and calm. I soon find myself slipping into a deep slumber, only to be awoken after what seemed like an eternity of the train pulling into a station. It had been an hour I had nodded off but I felt quite relaxed as if I had been sleep for awhile. 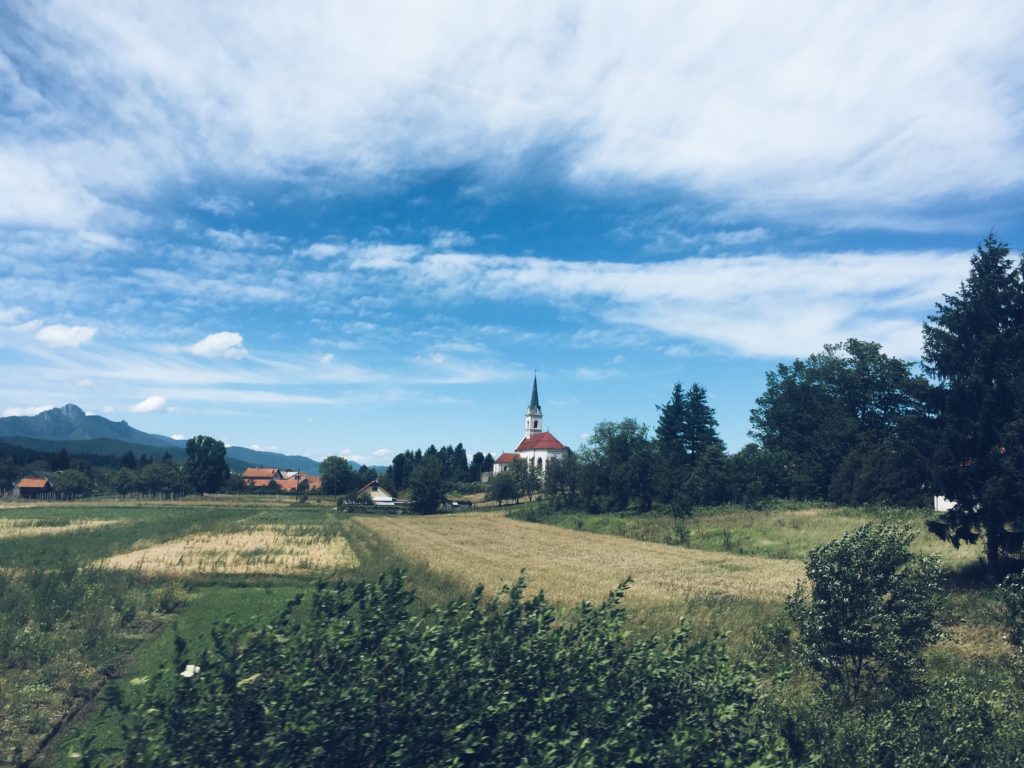 We had reached quite a high altitude now. Lush green fields stretched for an eternity before my eyes.

The middle aged couple across from me with the umpteen suitcases were both sound asleep, their lifeless bodies slumped onto their train table. The guy snoring in increasingly higher frequencies finally lets out a huge snort that not only wakes him up but his wife too. She gives him the meanest glare you could imagine. Meanwhile I am also keeping an eye on the old man behind him who spends a good part of an hour playing with the volume controls of the Blaupunkt speakers above our heads thinking it was a fan. I twice wave at him and try to explain that it isn’t the fan but he’s not one for listening . Increasingly agitated as to why wind does not come out of  Blaupunkt speakers he jabs away with his thick fingers until his wife, annoyed with his dogged persistence gives him a sharp rebuke soon after which he finally surrenders and slumps back into this chair. Thankfully , after that the air conditioning in the whole train switches on.

Licka Jesenica. Plaski. Josipdol. Gornje Dubrave. More exotic, interesting names of places I had never heard of till date. It may sound absurd to you but after many years of travelling, it is quite thrilling for me to go or pass through places which I have never heard of.

For what had seemed a long journey, it passed very quickly. As the fields gave way to highways and more socialist huge concrete blocks of housing, I felt a sense of loss and sadness that the journey was about to end.

Our final stop is the glorious Glavni Kolodvor station of Zagreb. It is a beautiful neoclassical building. A throwback to the more glorious era of train travel. The station used to be a stop for the Orient Express service. 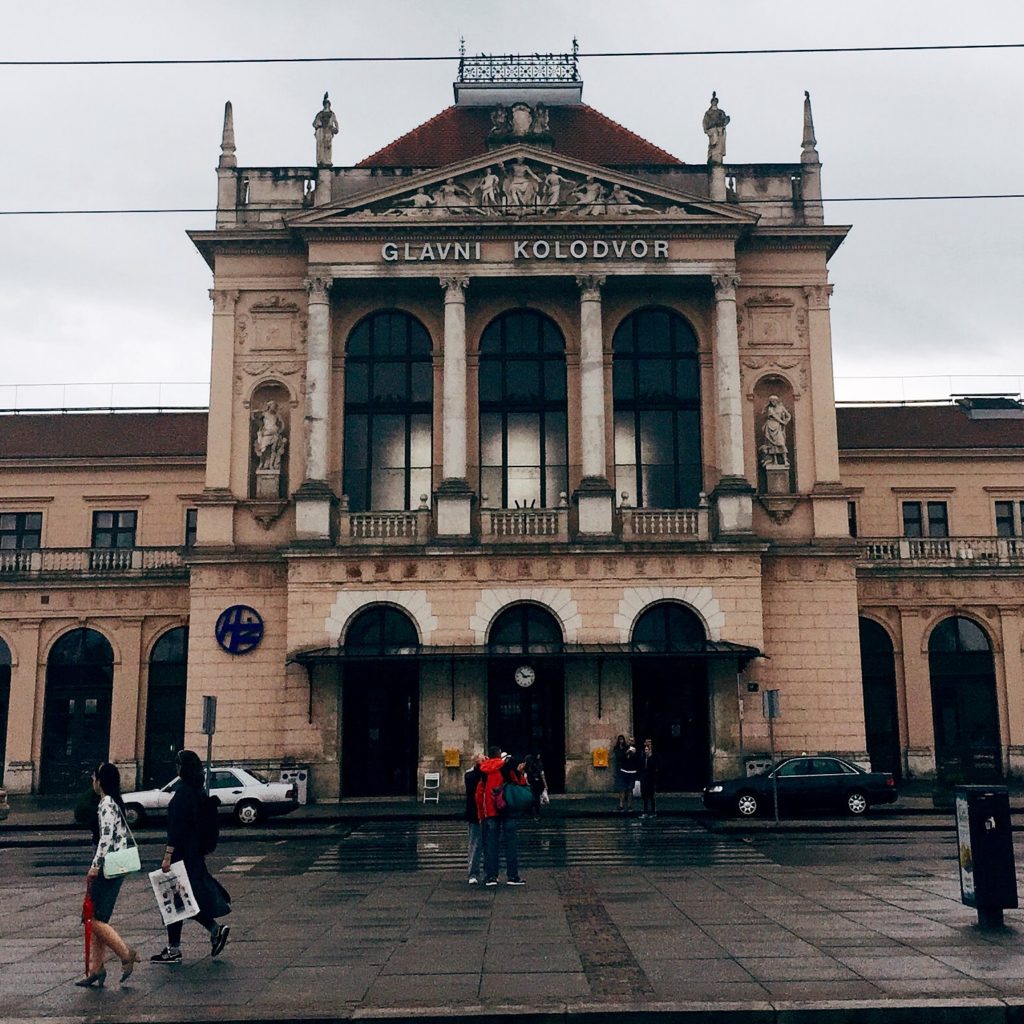 Even though a part of me is happy to be in Zagreb, the journey still lingers on in my mind.

Just like a good novel that lingers on long after the final page has been read, the memories of this trip are still in my head. Asking me questions. New ideas are buzzing in my head, some thoughts are clearer.

Ultimately travel in one way should be about reflection and rejuvination right?

Too often I find even when we travel, we are constantly in a rush. Need for speed like in our day job.\

Next time you travel. Take the long way around. Decelerate. Hit the pause button.

Forget about the passage of time.

Maybe the train to Zagreb.

The journey begins again. This was our first trip anywhere since the 10th March when we went to Amsterdam for my birthday/work trip. After…