It was exactly 12 years ago I had my first sip of Cognac.

It was the summer of 2001. I was at a friends wedding in France.

Somewhere in the middle of France.

Near a city called Angolueme. 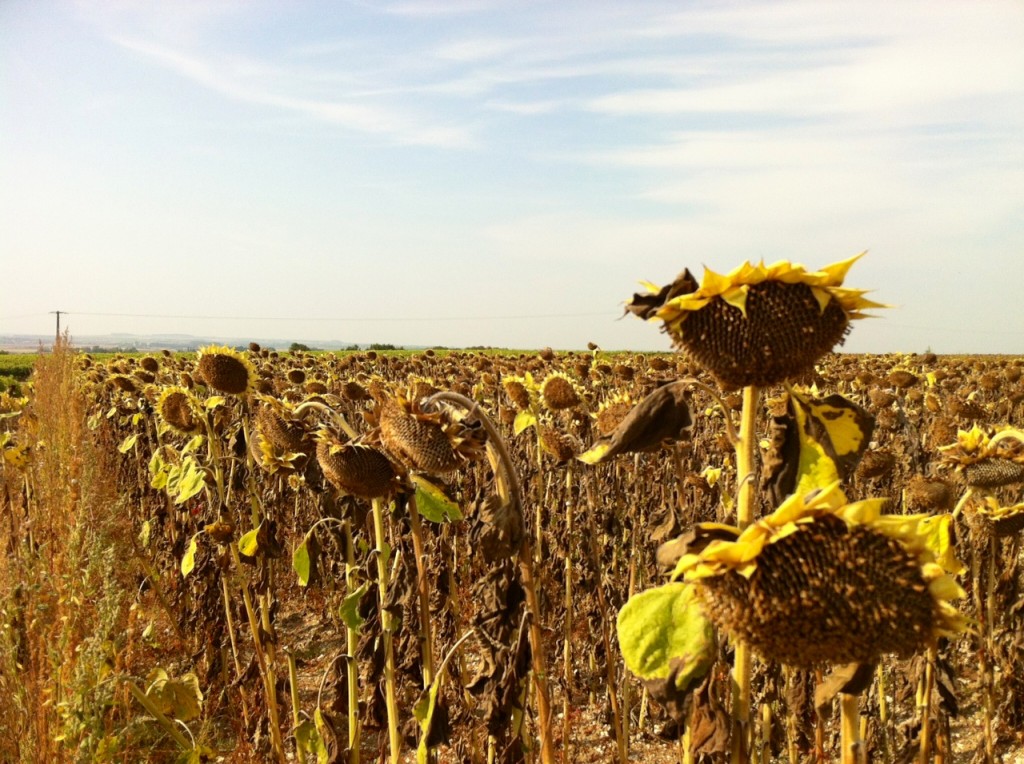 Summer’s at an end: Field of withered sunflowers we discovered just outside of Cognac

The wedding reception took place in a big huge field which had sunflowers to one side and pretty French girls in floral summer dresses on the other side,

I was somewhere drowning in the middle.

Right leg seemed lightly larger than the left leg and the crotch area was kinda small which…..

I had them got on sale from a shop that sold all big brands at knockdown prices.

I had paired this with a blue M&S shirt that I had worn almost everyday proudly on my recent winter placement at M&S.

However, the coup de grace was a very fine velvet jacket that I had bought from the winter sales in River Island.

My theory was that the jacket would look so fine that it would kind of cover my imperfections beneath.

The only problem was that it was hot.

To say I was sweaty wreck, was an understatement.

It was the first wedding I had ever been invited to.

I had heard how impossibly chic the French were.

My contact with them had been minimal at University till then. 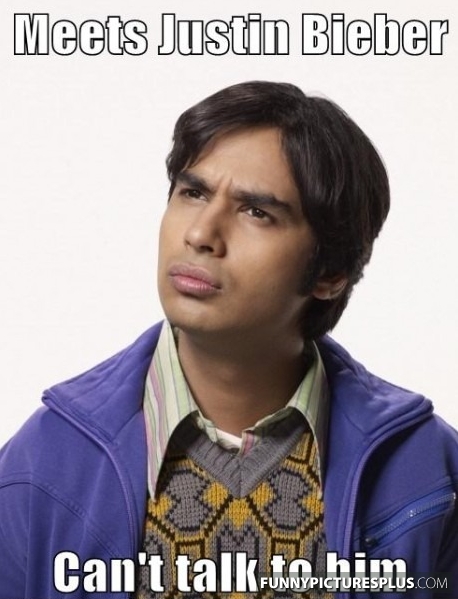 I think I was ahead of my years. I was like Raj from Big Bang Theory.

I had a case of selective mutism where I could not speak to any girl who was not Indian .

There were ‘out of bounds.’

Which made them even more exotic and desirable.

They smelled, amazing everytime I spoke to them

It was an urban myth maybe in my head but it felt that their sweat pores oozed eau de cologne.

Nothing could save me that day. 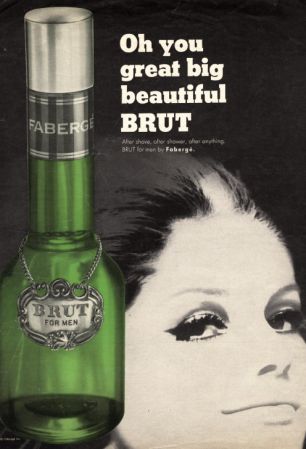 I was after all wearing multiple layerings of Brut that my father had gifted to me.

I thought Faberge being a French brand, I would be kind of like a demi-god in France.

Little did I realise, as masculine, overpowering Brut is, smelling like the girl’s father probably would probably not do me much good.

My nervousness was amplified by my charming, sexpert Irish friend who kept on raving in the run-up to the trip about how amazing French lingerie  was.

‘ They even iron their knickers,’

he told me in the brief, pre-wedding briefing session we had in the pub at Edinburgh aiport before flying.

From the moment of take-off , though a restless night in a rustic French B&B, I was haunted by images of nymph like French women, smelling irresistible and all of them ironing underwear in Victoria’s Secret.

I think the haunting images of beautiful French women in beautiful lingerie were imprinted deeply on my forehead that day.

Everywhere I looked, people looked away.

Maybe, it was the overpowering stench of my masculinine Brut power.

Or, it was just the smell of paranoia and the insecurity of youth that was the turn off.

My Irish friend told me I needed to relax.

Have a drink Kash. Relax

Last time he told me to relax, that night ended with me spewing Guinness in a ladies toilet in a small island called Achill off the west coast of Ireland.

Small enough that nobody goes there. 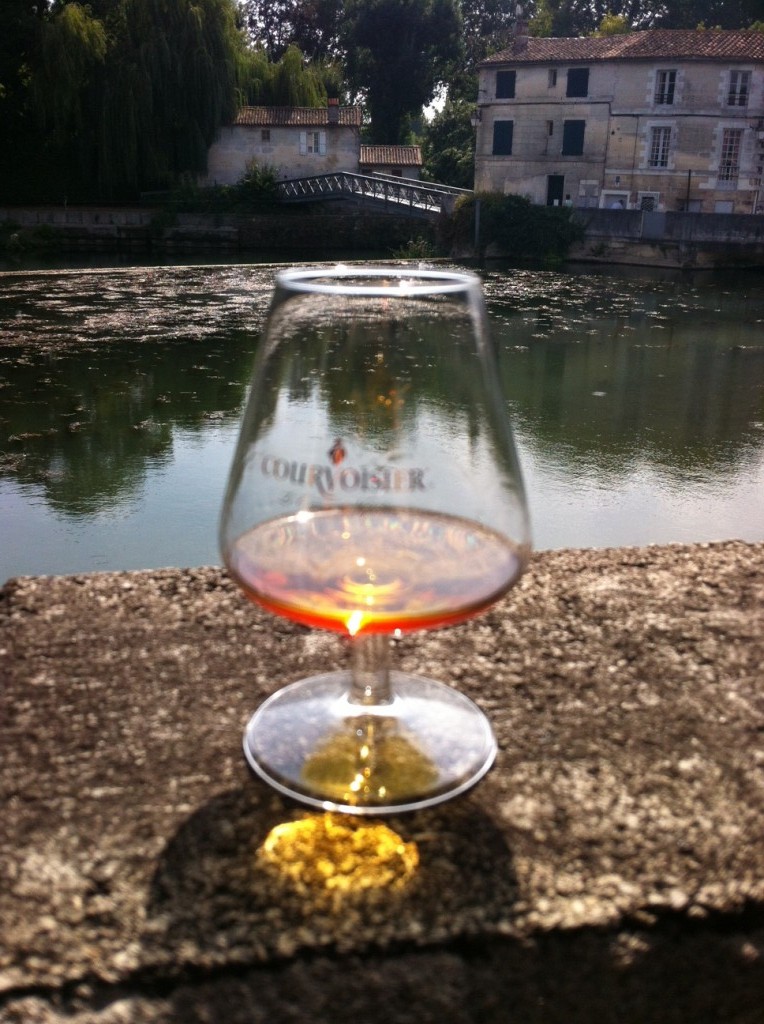 It was in this amazing context that I had my first sip of Cognac.

They were handing out on plates-tender cuts of pork with crusty bread.

I was advised by the brother of the bride that Cognac Schweppes was the drink to enjoy with this fine French delicacy that was being presented to me.

After 21 years of being a vegetarian and only recently having turned to the dark side, meat was still an unknown mysterious quantity to me.

Anyway, I start sipping on my first ever Cognac cocktail.

Pared with the bitterness of the tonic, the sweet flavours of the Cognac were perfect.

Nice, smooth and very refreshing in the heat.

Then, like a seasoned pro I was chugging it down quicker than you could say Jack Robinson

Before you knew it , the world was a happier place.

I even summoned the courage to converse with a girlfriend of the bride without breaking a sweat and imagining her in Victoria’s Secret lingerie.

All was well that evening, until I decided to grab the microphone and sing to the bride and groom.

I sang Nat King Cole-When I Fall in Love.

Yes. I am an emotional wreck when drunk and sing soppy love songs.

You have been warned…..

I think all I remember after singing is the abrupt, over enthusiastic and slightly hesitant applause.

The kind of applause you hear when you don’t know you if you have been treated to a moment of pure magic or something absolutely horrendous.

I am back in Angouleme. On a mini-bus to Cognac. 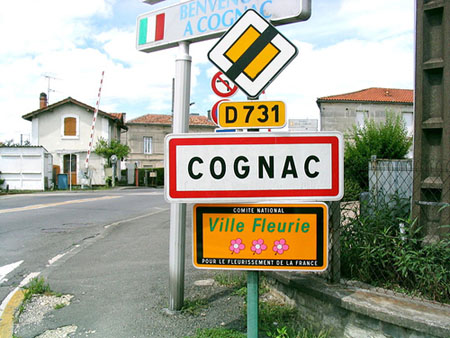 Yes, believe it or not there is a place dedicated to this wonderful drink.

It is a shame that there are not places in the world one can visit like ‘Whisky’ or ‘Beer.’

However, Cognac is the real deal.

From Hennessy to Martell to Courvoisier-all have originated here in this sleepy little town by the river. 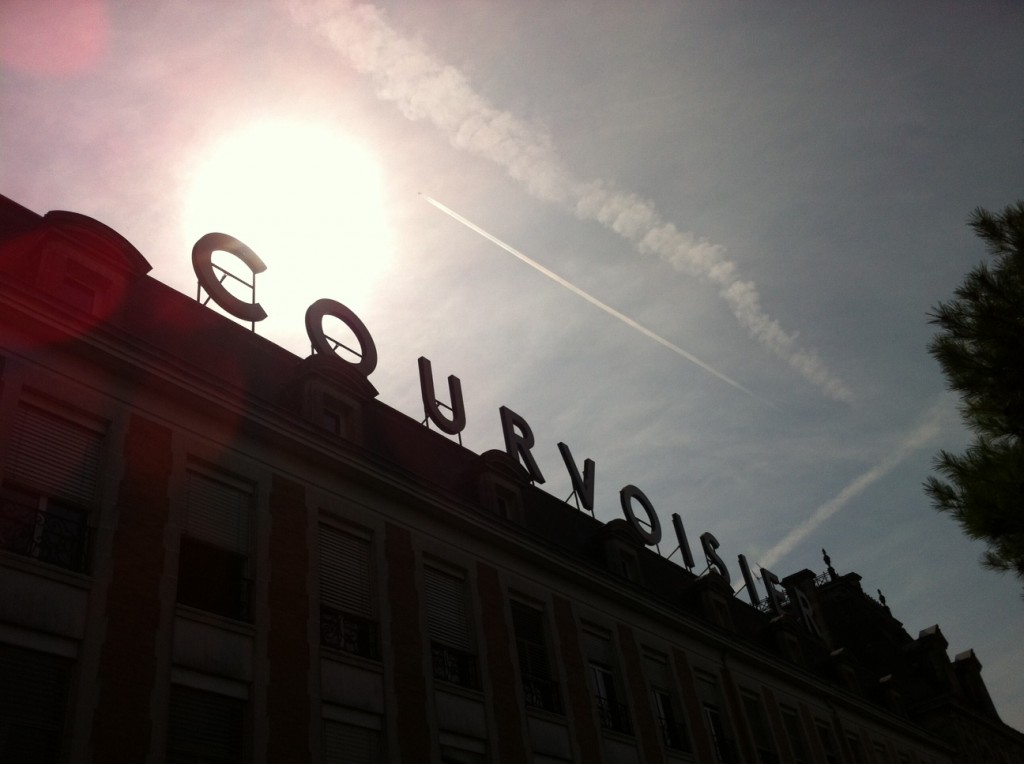 We’ve been invited to the House of Courvoursier for the day.

The house of Courvousier is actually just out of Cognac in a sleepy town called Jarnac by the beautiful Charentes river.

It sounds posh, I know.

Something appropriate for royalty like Napolean or Busta Rhymes instead of the BudgetTraveller.

The tour include the history of the Courvoisier House.

Napolean the 3rd offered Courvoisier the royal charter in 1869.

Which was a pretty neat deal- lots of free booze basically for Napolean and his platoon. 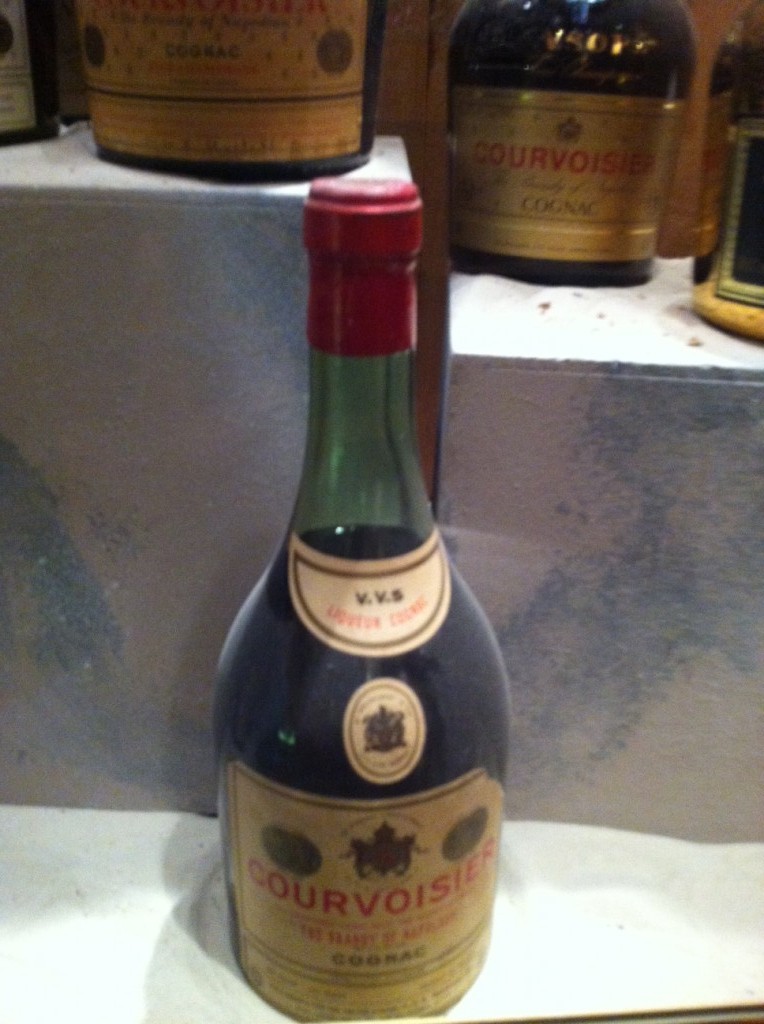 I kid thee not! This bottle is supposedly the lifelike resemblance of Josephine, Napolean’s wife.

The House of Courvoisier loved Napolean so much that even the shapely size ( narrow plume like neck and nice very curvy shape henceforth ) of the bottle was shaped supposedly in the form of his wife. Josephine.

Courvoisier and Napolean were indeed a royal match. 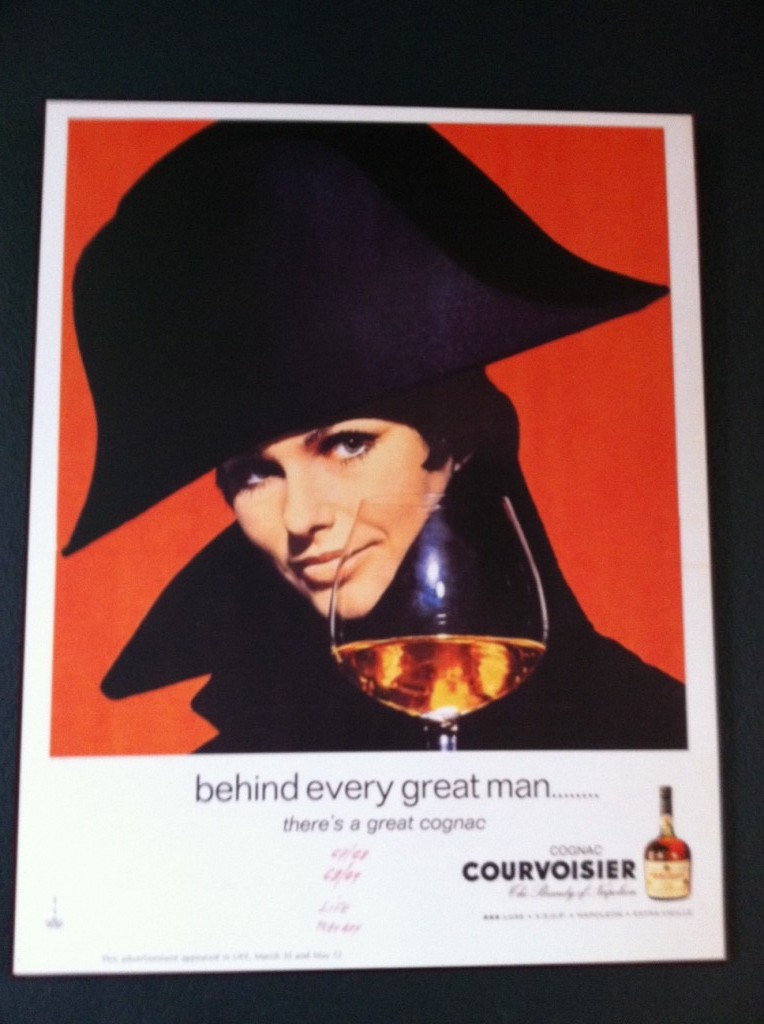 The tour includes some very interesting museum pieces including the original hat and coat worn by Napoleon. 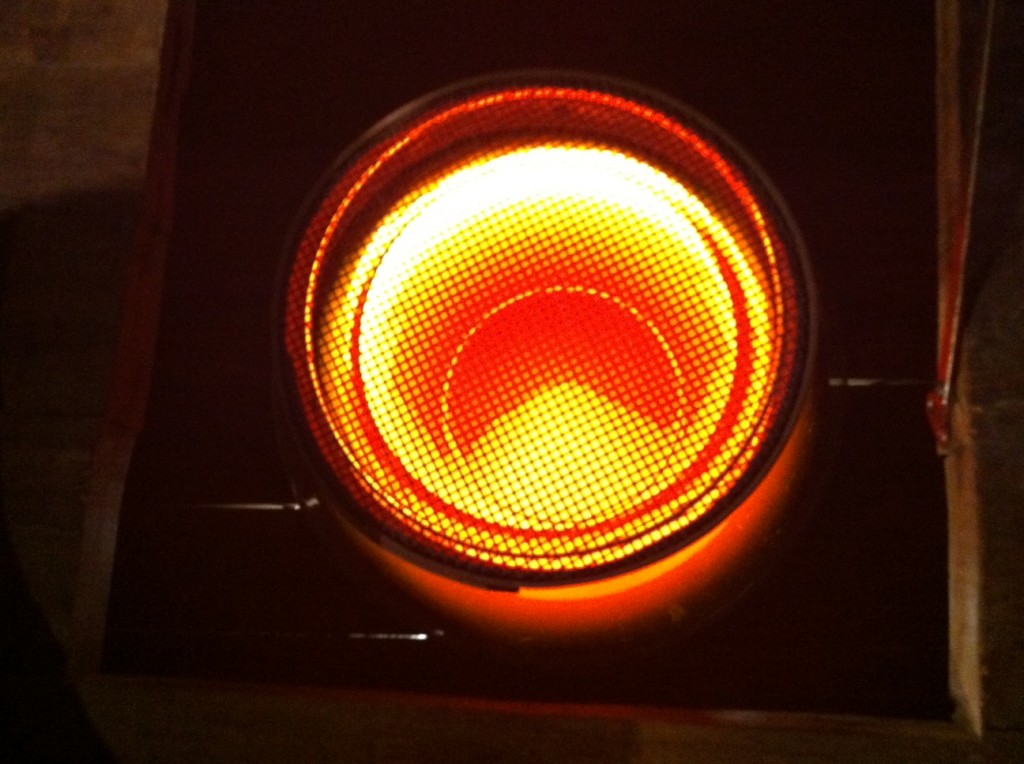 You also learn the process of making cognac from grape to bottle. The grape from which Cognac is made is limited to 75000 hectares, 6 growing areas and 800 vineyards in the region.

Some of the tours include the option of a special tour of the Privi (Paradise) Cellar, where I saw bottles and barrels dating back centuries. 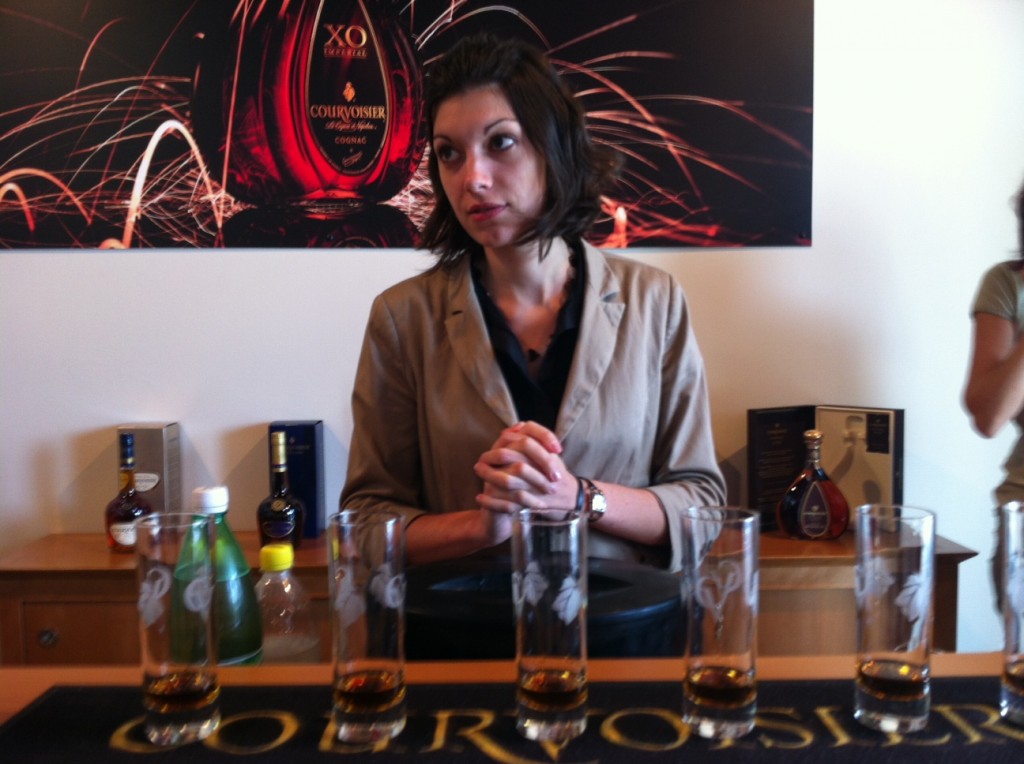 The best part is at the end though when you get it taste the Courvoisier VSOP Exclusif at the end of the tour.

Tasting that Cognac was wow.

Very complex and elegant with hints of chalk, clay, lime- typical of the soil of the area with aromas like hazelnut or orange blossom

I am lost drinking the Cognac.

I am floating out of the House of Courvoisier on a virtual boat down the Charente.

I’m probably looking for my big field of sunflowers and pretty girls in summer dresses where my younger, innocent self once stood.

That was another lifetime, another place and person.

They told me on the tour that it takes many years , often a hundred for the eau de vie ( water of life) to reach perfection and form the perfect Cognac.

Many life cycles come and go before the moment of perfection arrives.

In that sense, Cognac is not dissimilar to life I guess.

I was a guest of Visit P Charentes tourism board to whom I’d like to extend a warm thanks, especially to the amazing Sandrine plus also to Sue, Alexandra and Ali from Magellan PR  for again reacquainting me with this beautiful region. Also thanks to the House of Courvoisier for a memorable afternoon. Plus I must mention the fantastic group of #EpicCognac bloggers Iain Mallory from Mallory on Travel, Laurel Robbins from Traveldudes & Monkeys and Mountains  and last but not least, Larissa from the Blonde Gypsy – was an epic few days hanging out with you guys!

Please note that all the views expressed here are solely my own.

Thank you for reading and do drop by again for more instalments from my trip.

This year I turned 36. I am a year younger than when Vincent died. This year marks 125 years since his death: 30th July,…