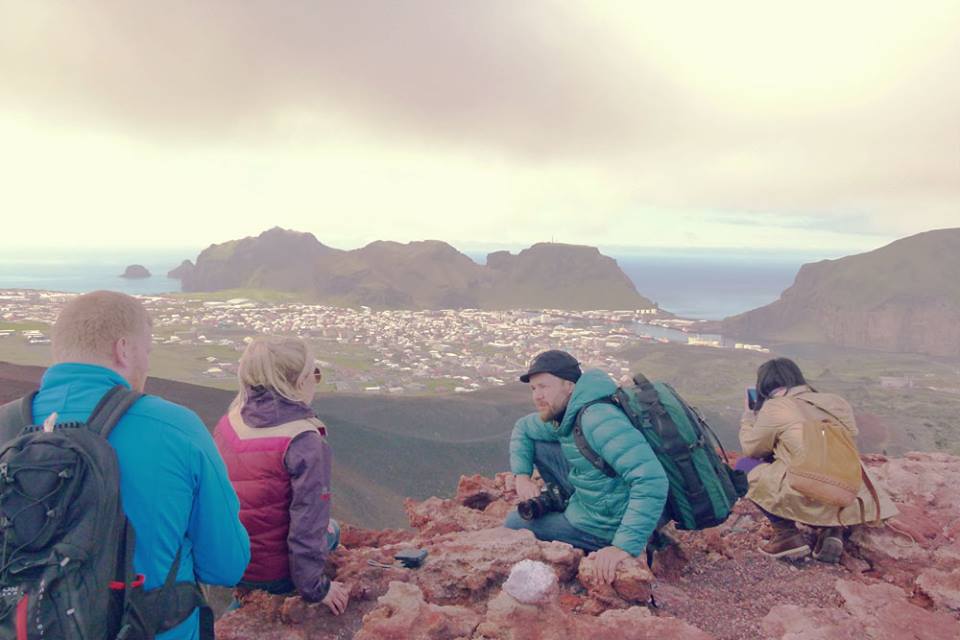 Sitting on top of Eldfell

Know before you go

A notoriously expensive country and city to travel in, Bus Hostel is currently the cheapest hostel and budget accommodation available in Reykjavik. Prices for a bed in a dorm start at 2800 ISK (£15) a night in low season and 4750 ISK (£25) in high season. A double room is 9100 ISK (£50) in low season and 12990 ISK (£70) when summer rolls around and this includes towels and bedding. Get to Reykjavik and the Bus Hostel by hopping on the FlyBus from Keflavik Airport. If you buy the Return+ ticket it includes a drop-off and pick-up from the hostel.

Also try renting a campervan for your five-day tour in Iceland. This mobile home can have everything you need to serve as a cozy accommodation and reliable transportation too. Look forward to each new day actively exploring or simply enjoying a quiet time in your vehicle. If you are worried about the cost of hiring one, check out cost-effective rentals at Cozy Campers.

The more I travel, the more I start to think that places have more stories than people.

One of the places that all but convinced me of this was the Westman Islands, a cluster of wild, rocky islands off the southern coast of Iceland. Here I was lucky enough to see – and climb – part of their story; the 40-year old remnants of a volcano that drastically altered Heimaey, the Westman Islands’ only inhabited isle. When it erupted unexpectedly in early 1973, it effectively “grew” the island by a fifth, spilling lava out into the sea , which hardened and formed a new landmass that is only now starting to calm down and grow vegetation.

Exciting and enthralling as this may sound – and it was an honour to see it – it was also deeply frightening and destructive as the eruption also took with it 400 homes and threatened to cut off the island’s lifeline; it’s harbour. While the island grew by 20%, the population dropped by the same amount as families were evacuated and didn’t return. Those who stayed had to live with a black and red steaming mountain as a reminder of what happened in 1973. As life-altering as this particular story is (and it’s a small miracle that no body was killed), it certainly goes some way to confirm that Heimaey is a very special place – which proud locals would tell you in a heartbeat – as it’s one of the youngest and most raw volcanoes in Iceland that you can literally get up, close and personal with. In fact, you can climb its full height and sit on the cusp of its crater, admiring a view of the town and surrounding islands. For an idea of the magnitude and force of a volcano, you can dig a few inches into the golden brown mass you stand on and you’ll feel the heat of Eldfell – the volcano you just climbed to the peak of – it’s barely starting to cool down. 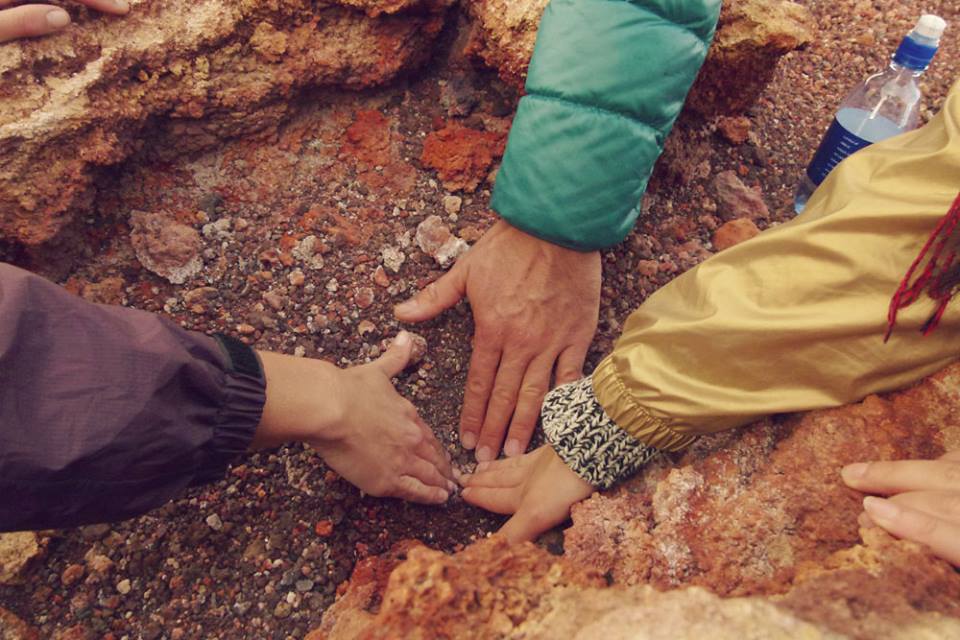 Feeling the heat of a volcano

Eldfell is one of three volcanoes I got, up close and personal with in Iceland, albeit from different angles and in very different ways. Eldfell is certainly the only one I can pronounce, Thrihnukagigur and Eyjafjallajökull (of 2010’s “ash-cloud” fame) being the other two. Three volcanoes, three days of eye-opening, mind-blowing and memory-making adventure. Before I tell you more, I need to inform you that you can win this exact same experience. You (and a friend) can enjoy a five day trip to Iceland with flights, accommodation (at Bus Hostel Reykjavik), car hire and tours all included.

Read on to find out exactly what we did and how you can win exactly the same experience. 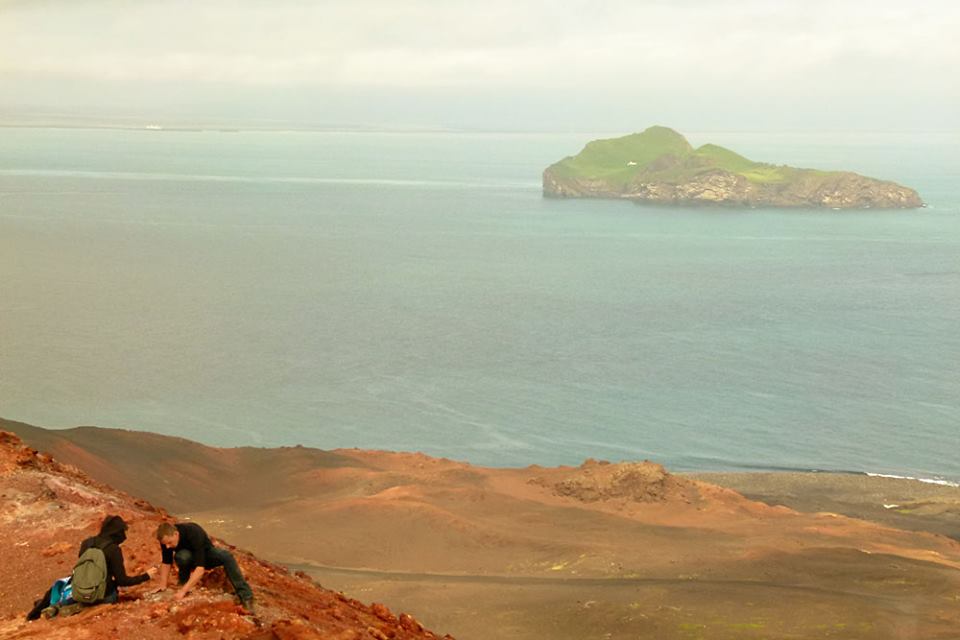 Admiring the view from the top of a volcano

This was our trip to the Westman Islands. We drove south through lunar-like lava fields and caught whiffs of sulphur in the air as we passed a geothermal energy plant. The scenery changed quickly but stayed consistently impressive; Iceland is one of those countries that is a privilege to drive through. With a few stops planned en route (I don’t want to spoil all the surprises!) we met our guide “Viking Jon” and from there drove to catch the 30 minute ferry across to Heimaey. After climbing up to Eldfell’s peak (a steady but short hike that is steep in a few places but with endless spectacular views) our efforts were rewarded by a visit to the island’s cliffy coastline where puffins take their summer holiday. 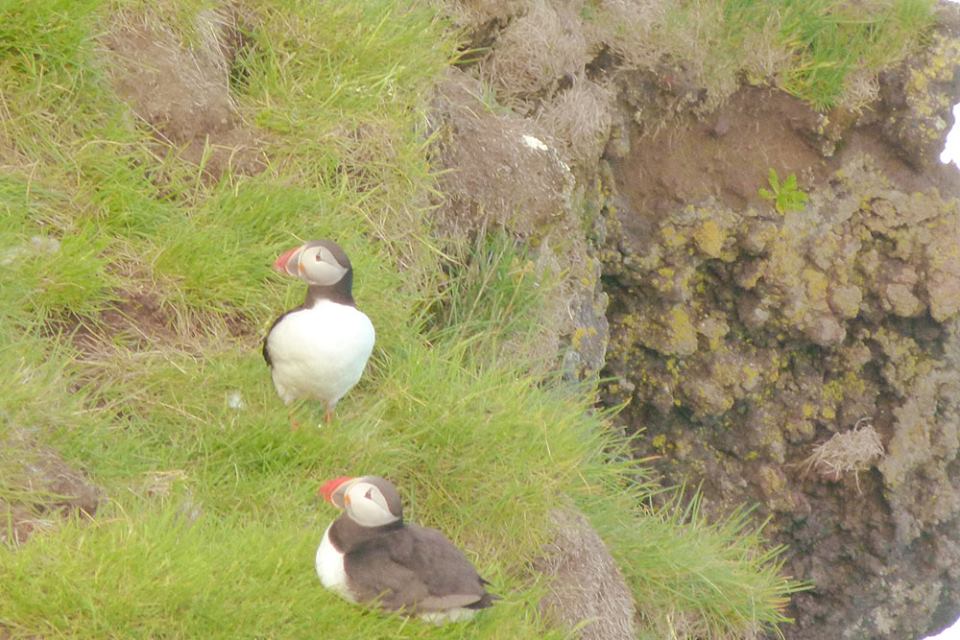 If you’re still awake and up for it, Jon will also treat you to a drive along a beautiful black sand beach once you’re back on the mainland. 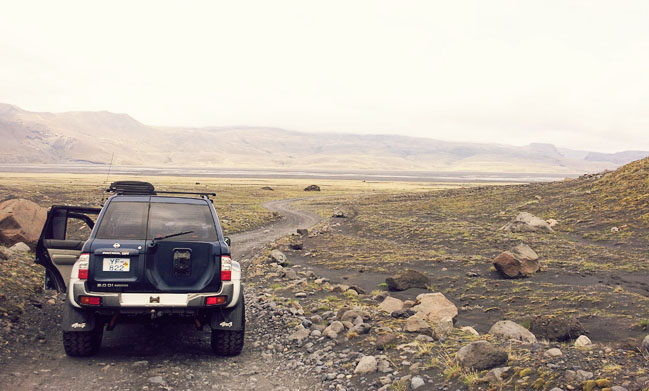 A view to remember

Again we left Reykjavik by heading south. It was the same journey, but it was far from broing. After meeting Viking Jon again, we headed inland and were given a tease of what was to come later as we drove past a row of beautiful waterfalls including the famous Seljalandsfoss. Quickly, the tarmac road gave way to gravel and flat turned into rocky and river-like on occasion; you’ll be grateful that you’re in an elevated 4×4! Eventually we reached the foot of the Gigjokull glacier and there followed some fascinating lessons in geology and geography (and I don’t say that loosely – geography was my least favourite subject at school!). 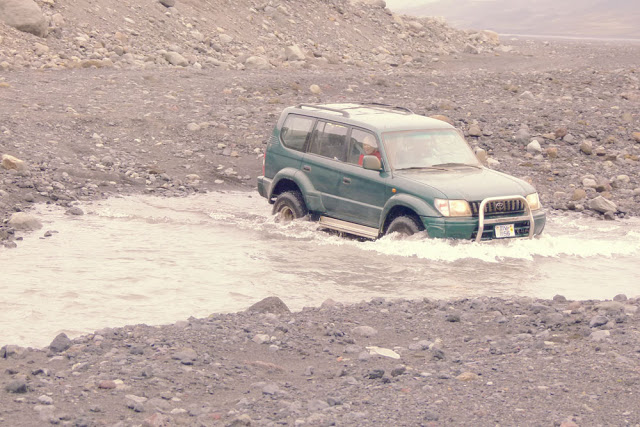 Afterwards we travelled further into the vast valley which became even more unforgiving in terms of terrain – but no match for the beast of a vehicle you’ll be driving in. We parked up and took a very gentle hike into a nearby valley.  Thórsmörk National Park is renowned for its natural beauty and hiking trails – and hiking isn’t my favourite activity – but I loved the views on offer. 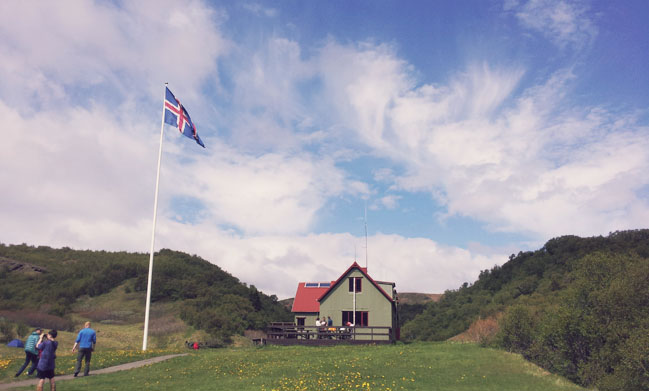 Heading home we got to “play” in the waterfalls we’d seen earlier and it’s actually hard to describe how impressive these were. What I can easily say, however, is this – bring a waterproof jacket! 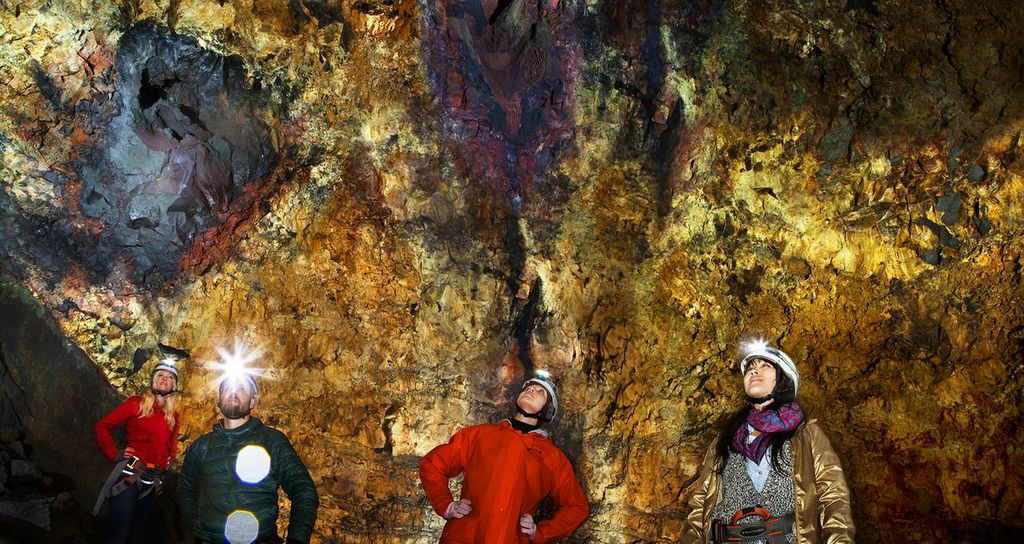 Inside the Volcano – Photo by the fantastic Anders Bergh

By this point you have climbed a volcano and explored the base of another one. Today it’s time to go inside the volcano, literally. Google it if you want, or leave it open to your imagination, but “Inside the Volcano” is a very new and completely unique experience that has only been available to the public for a year so I now feel very privileged to be one of only a relative few who have stood inside a magma chamber. Crazily colourful, very humbling and peculiarly emotional, it’s an experience I won’t forget. It’s made all the more fun by a lively hike across a lava field that crosses continents as you’ll have the opportunity to have one foot in American and one in Europe across a crack that shows you how the continental plates are pulling apart making Iceland grow by 3cm every year. 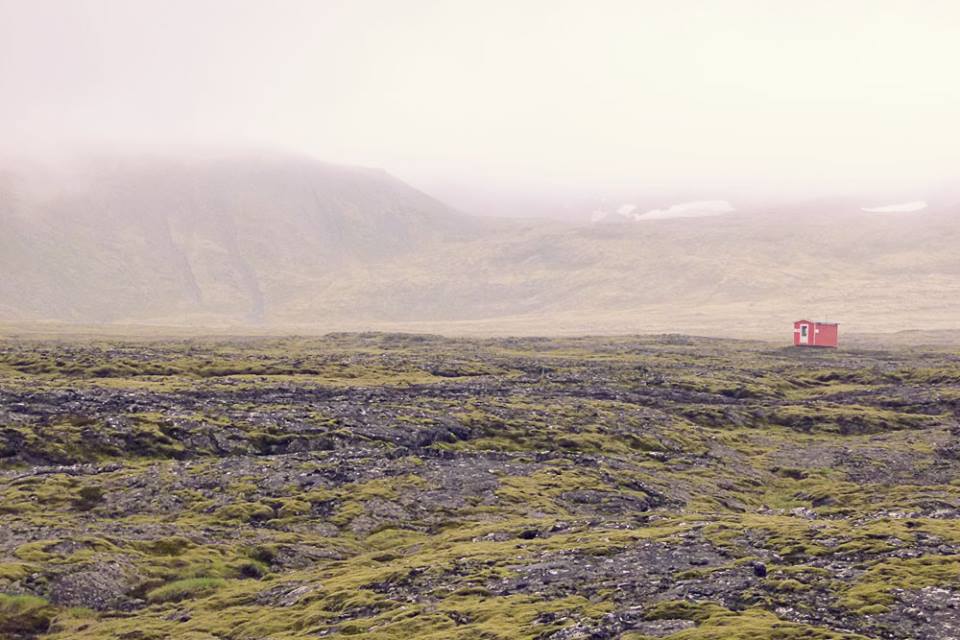 That afternoon we followed one of the most spectacular roads I’ve ever driven across more lava fields and other-worldly landscapes to see some of Iceland’s geothermal activity at the smelly but sensational mud springs at Reykjanes Peninusla. 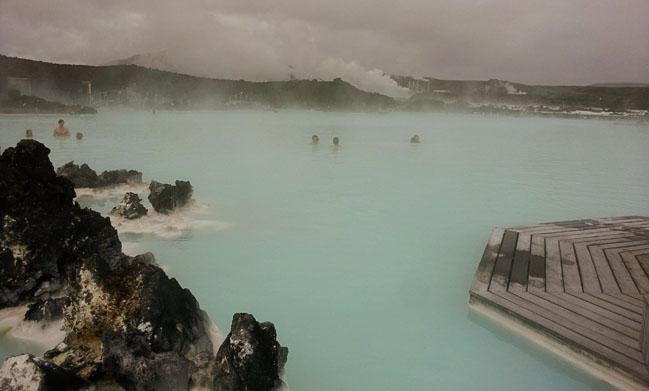 Our day ended with a well-earned soak in the Blue Lagoon, though the relaxing doesn’t stop there; you’ll also be treated to a delicious dinner in the adjacent Lava Restaurant. Magic! 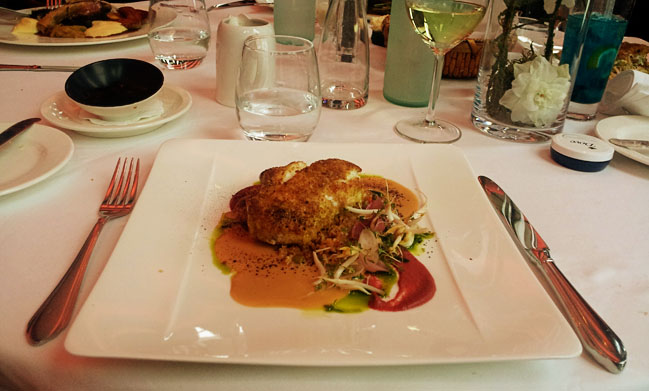 A delicious dinner at Lava Restaurant

A day of rest and relaxation in Reykjavik. I climbed to the top of Hallgrímskirkja, wandered the pretty city streets, admired the striking Harpa concert hall and took photos of the colourful corrugated iron houses. However, if you still have a taste for adventure you will still have the keys to your hire car so feel free to go exploring further afield too. 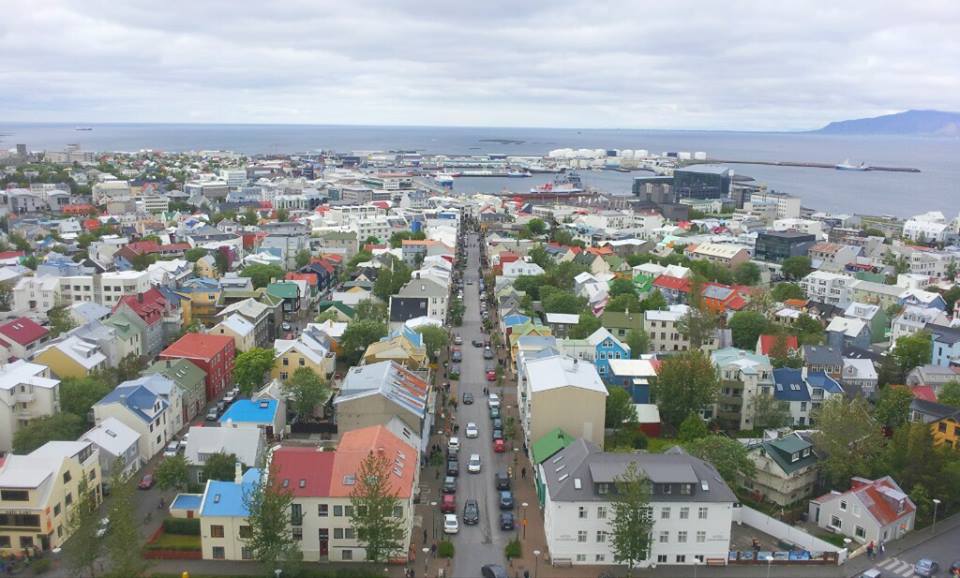 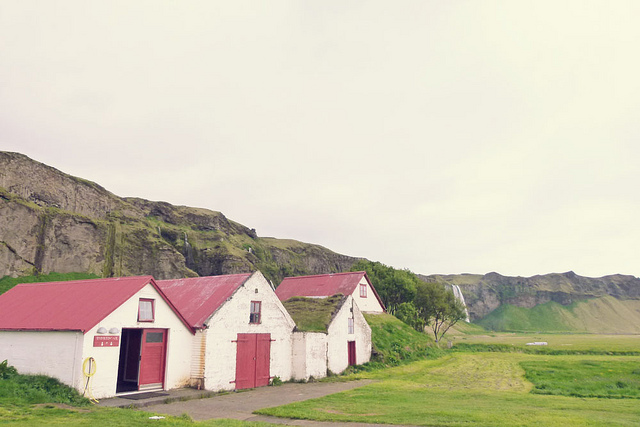 If you’re looking for a taste of warm Portuguese hospitality in an unbeatable location within Lisbon, then say hello to Goodmorning Hostel on…