We watch TV on the tablet or laptop. We play games on the iPhone.

We read the news on the iPhone in the toilet. Ok, I do that and maybe you do too.

In this world of the quick digital fix and constant notifications, reading books is not so appealing anymore. Or we just don’t have the patience or energy. This is where novelists should try and compete for our ears instead of our eyes.

These are the thoughts of Irishman Kevin Barry, author of the most innovative novel of the year, Beatlebone. He is definitely competing for my ears and the rest of the 40 strong audience, that have been crammed into one of the rooms of the former Royal Palace of the Hague, the Koninklijke Schouwburg.

It feels quite surreal. I am sitting directly under the dim light of this huge glass chandelier that is twenty times the size of my head in the very regal surroundings of this palace. Actually, it is a performing arts theatre I’ve been told but it still feels like at any moment King Willem Alexander might walk in.

Listening to his distinct raw Limerick/Cork accent I feel a million miles away from home , my iPhone and its bloody notifications. And it feels great. I sip gently on my ice cold pint of local craft beer they’ve been dishing out by the dozen in the foyer and slowly, surrender myself to the spoken word.

Barry’s prose is very playful and has a wonderful musicality to it: it translates really well live.

As someone who writes for a living, it is fascinating to hear other writers open up about the creative process of writing. Barry asks the audience whether he is actually funny in Dutch and whether they got his jokes. He sometimes finds that humour is hard to translate. He writes his short stories around a theme. It is liberating for him to write about various themes. He once wrote a story about a woman who fell in love with a bull. In such stories, he tries be as concise and succinct as possible. He finds writing short stories difficult to write and intense. Like walking a tightrope: sometime you’ll fall off and break your neck. He feels that you can get away with a lot in a novel but there is no room to work with in a short story: there is no freedom. He wants his stories to be ‘fucking wild.’

Quoting Pinter, he never gives the reader what he/she expects. 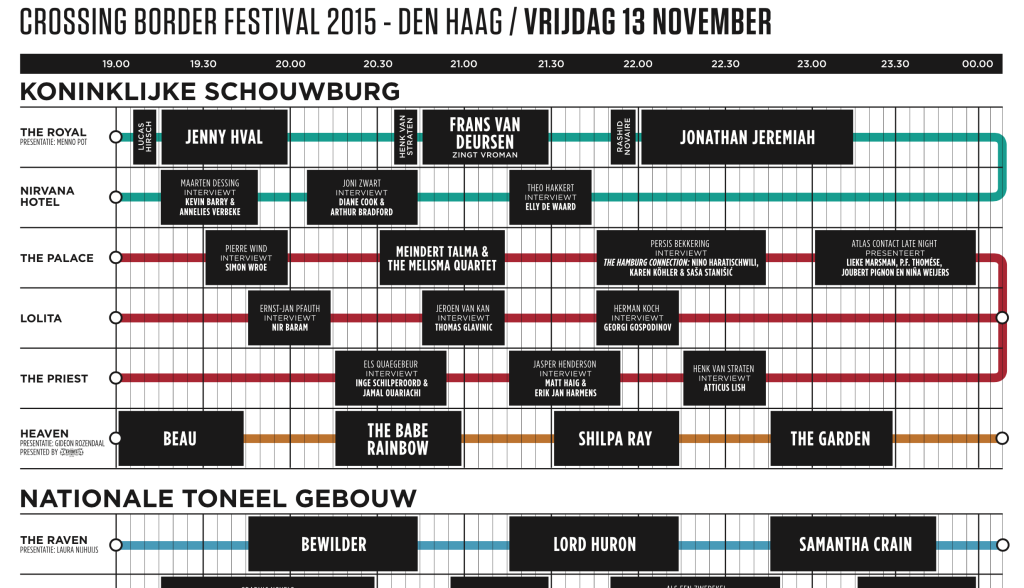 Barry’s philosophy of keeping his readers on the edge of their seats is shared by the organisers of Crossing Borders. I had never even been to a book/writers festival before this so I was absolutely clueless as to what to expect. I wasn’t sure what to expect about a festival that mixes acclaimed and emerging authors with alternative pop. 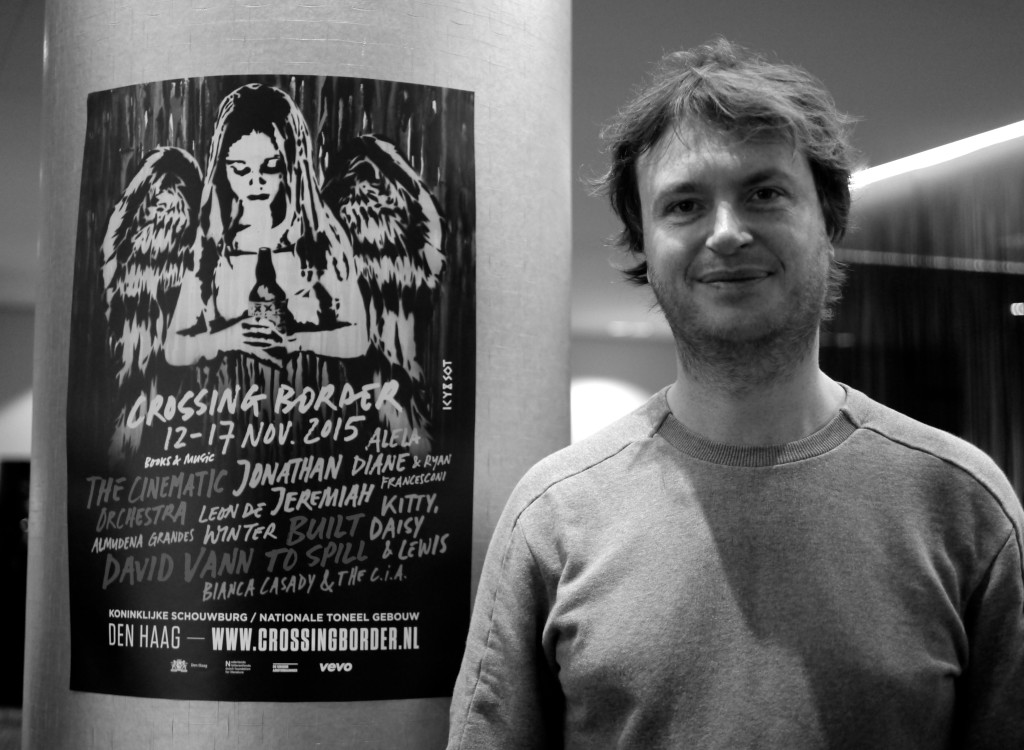 With performances occurring simultaneously on several stages over the course of 2 days, Crossing Borders is quite an intense, heady mix . Lot of festivals have the habit of splitting things up into a literary tent and then a music tent but at Crossing Border they all mix together in one potent cocktail. It is a mix that works well according to festival director, Michel Behre.

‘Lot of musicians dream of being writers and likewise writers often dream of being musicians so the mix works well for us. Writers feel like rock stars being programmed in-between music acts on the main stage in front of a huge crowd of music lovers. It is a different atmosphere altogether to what writers are used to so they really raise their game to perform for the crowd. The whole thing becomes original as well as personal.’

I hop skip and jump from Barry’s session to the next-door performing arts theatre, the Nationale Toneel Gebouw where they have two stages named the ‘Raven’ and the ‘Heartbreak Hotel’

The names of the bands are obscure so I google the website of the band that is next on at the Raven. 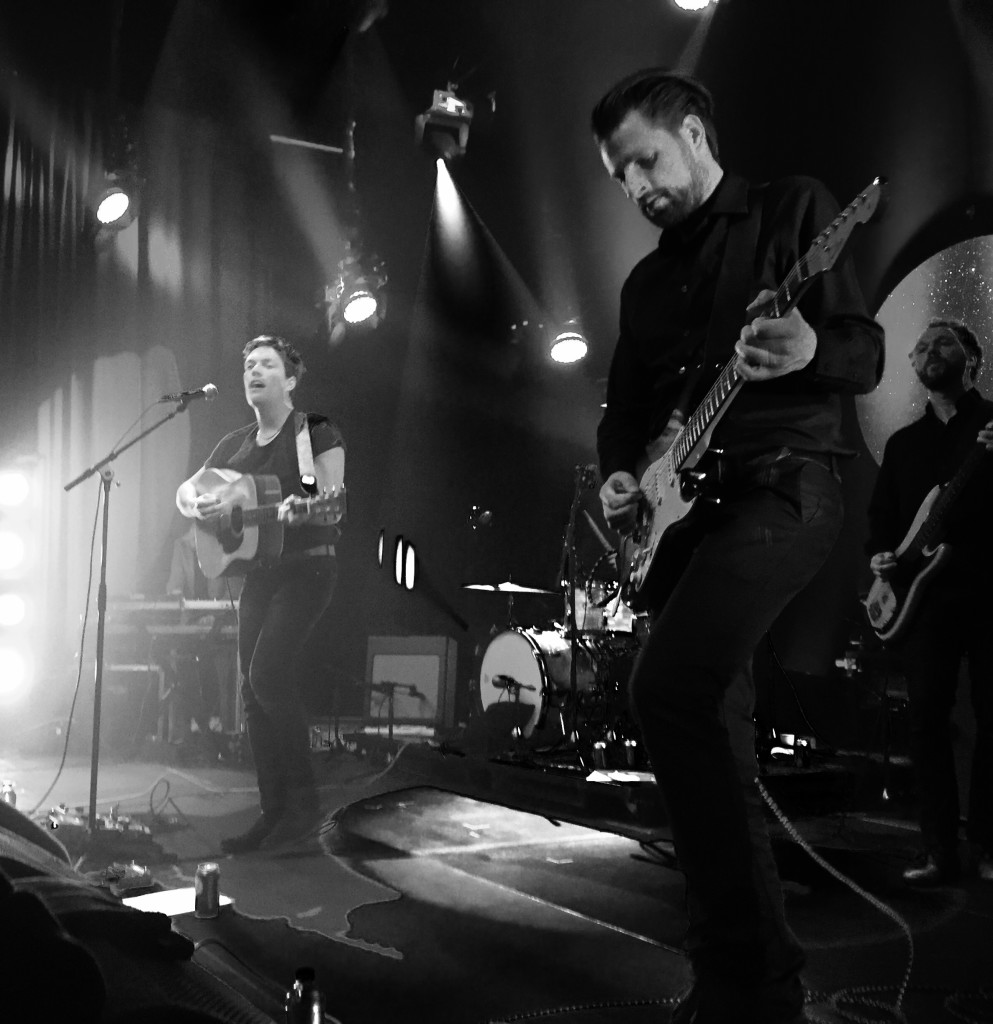 The native Dutch band describes themselves on their website as having a groovy vivacious indie sound. Sounds good to me and not bewildering at all.

Their music, true to their website is very vivacious, infectious and gets the crowd on their feet.   The songs they play on the set are from their first album Dear Island. The album is a tribute to the isle of Vlieland, one of the beautiful Wadden islands where they wrote, rehearsed and recorded the album. The standout tracks are the funky soulful ‘The Unknown’,  and my favourite the rousing, uplifting  ‘Carry on Carry on.’ Lead singer Westerik is a charismatic presence on stage and has a soulful voice that reminds me a bit of Dylan, Bowie and Lou Reed. 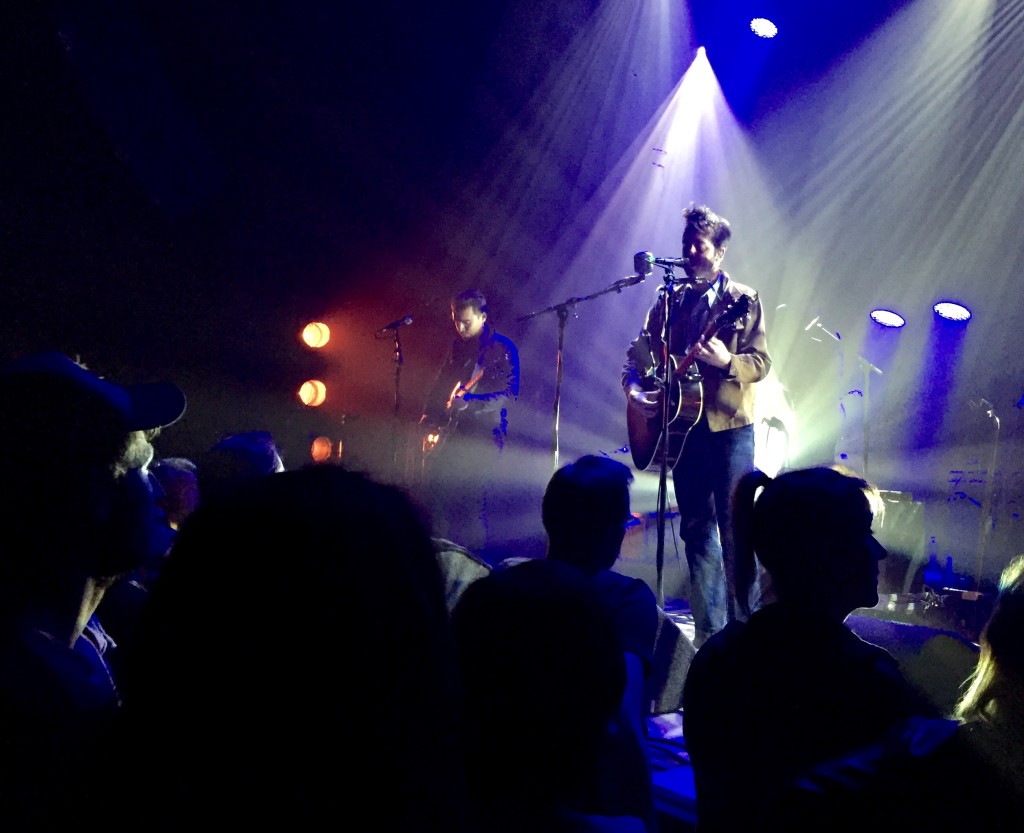 While I also enjoyed the more notable followup act of American Indie band, Lord Huron, the Bewilder set was definitely one of my highlights of the day and the festival. Maybe its me and my joy of discovering emerging voices in the world of music but this is where festivals like Crossing Border excel in giving a platform to lesser known, unheralded talent. It’s definitely something Michel Behre has a eye for with bands like the National, Mumford and Sons, Coldplay, The Black Keys and recently Ed Sheeran all performing at Crossing Borders before they made their big break through on the international stage. 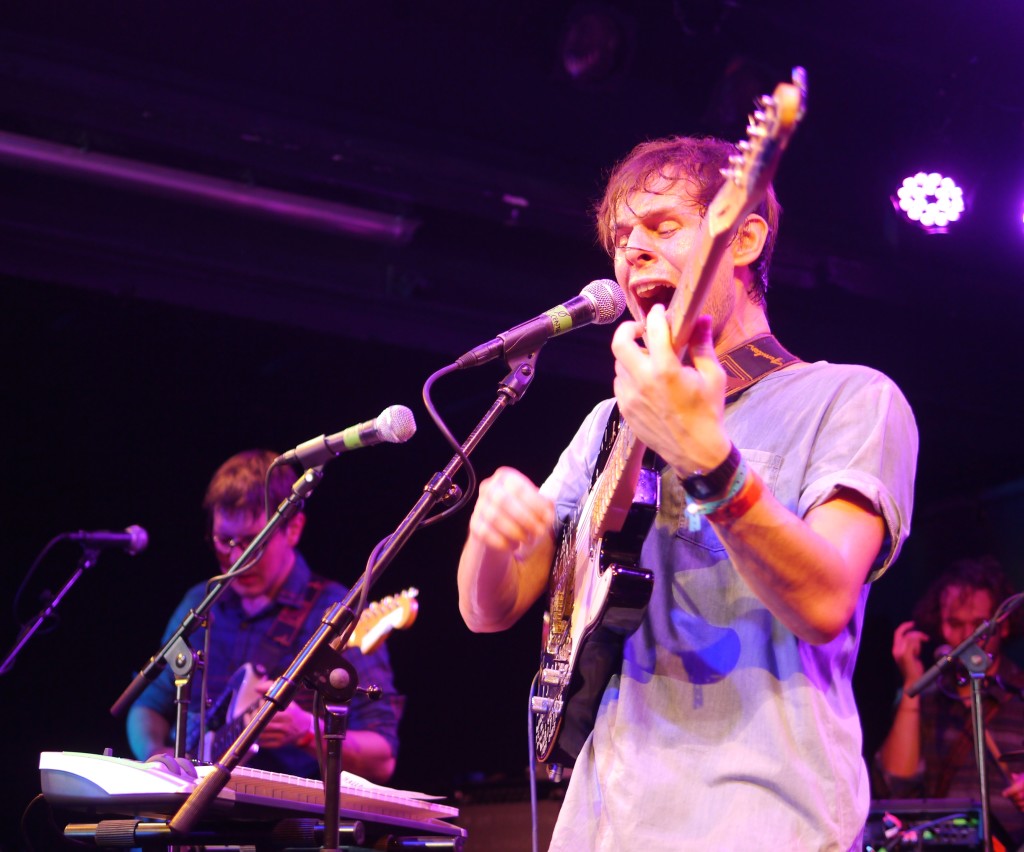 The following day, I enjoyed another relatively less known Birmingham based indie trio ‘Little Comets’ Again, I was flitting from stage to stage and sadly caught at the end of their set. In 2009, the band achieved moderate success with their debut album ‘In Search of Little Comets.’ 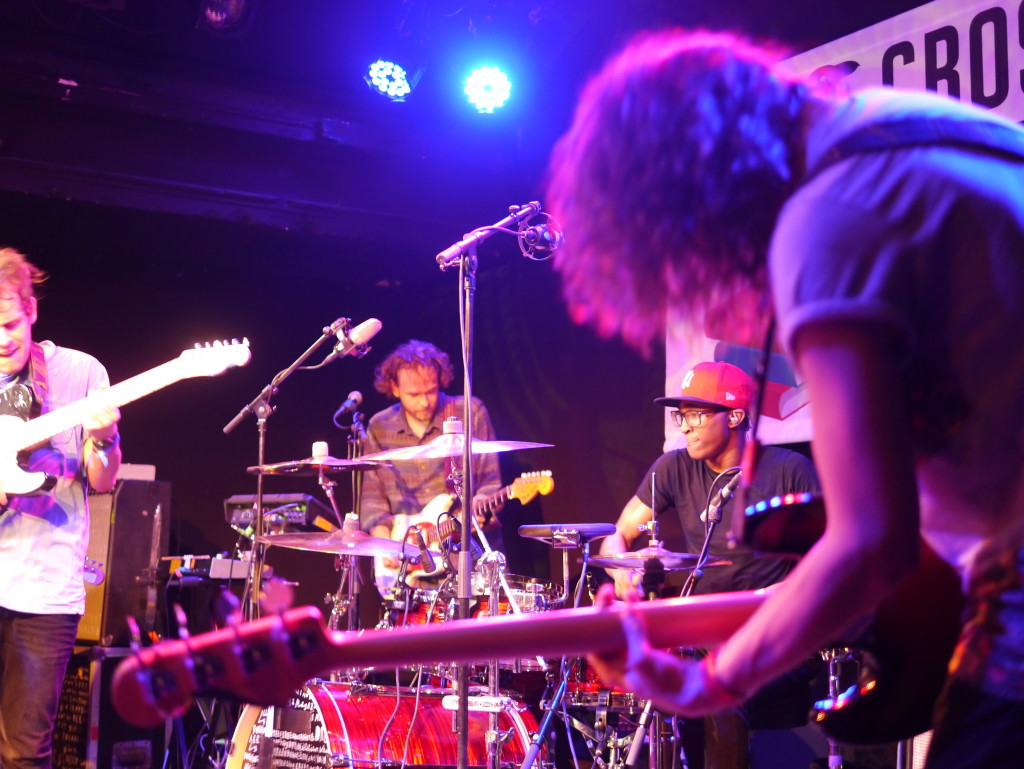 Upbeat music and very melancholy lyrics. Loved all their tracks I heard :’ The Blur, the Line and the Thickest of onions’, ’Worry’ and the ‘Dancing Song.’ 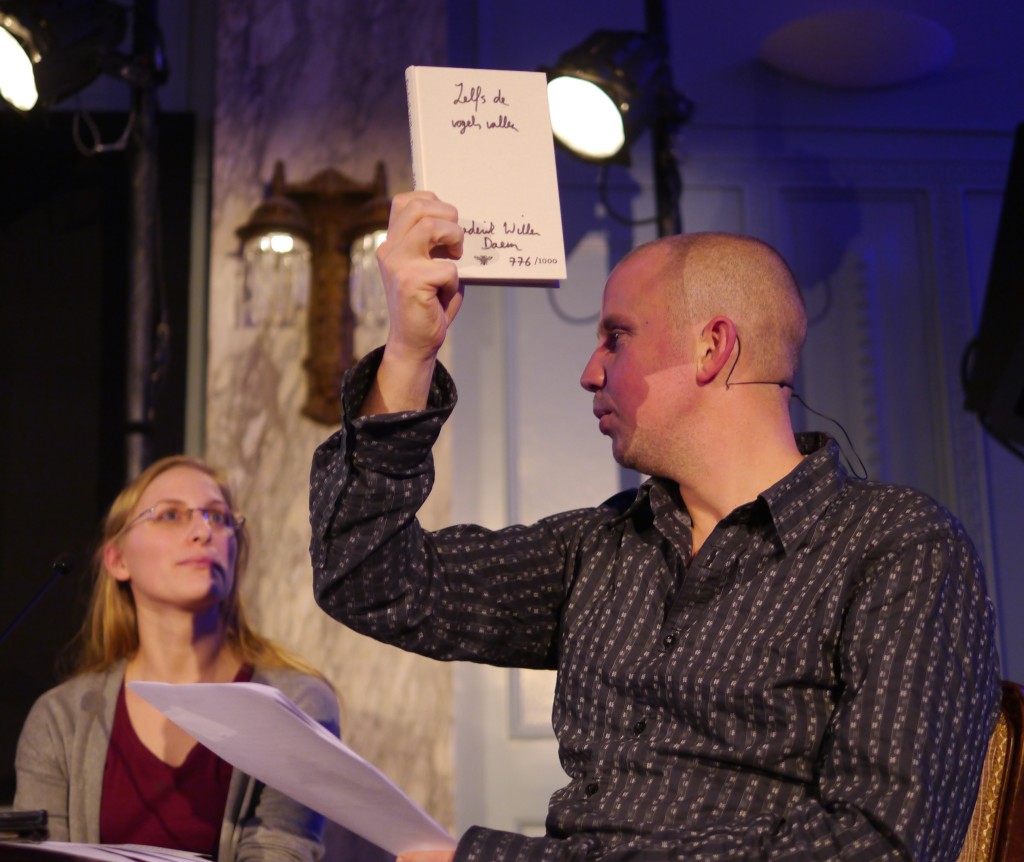 After experiencing the highs of discovering cool bands and promptly adding them to my Spotify playlist, I retreated back to the world of the written word and the Royal Palace . I decided to attend the Chronicles session where I listened to an interview with an emerging dutch author Frederik Willem Daem talk about his new collection of short stories Even the birds fall. 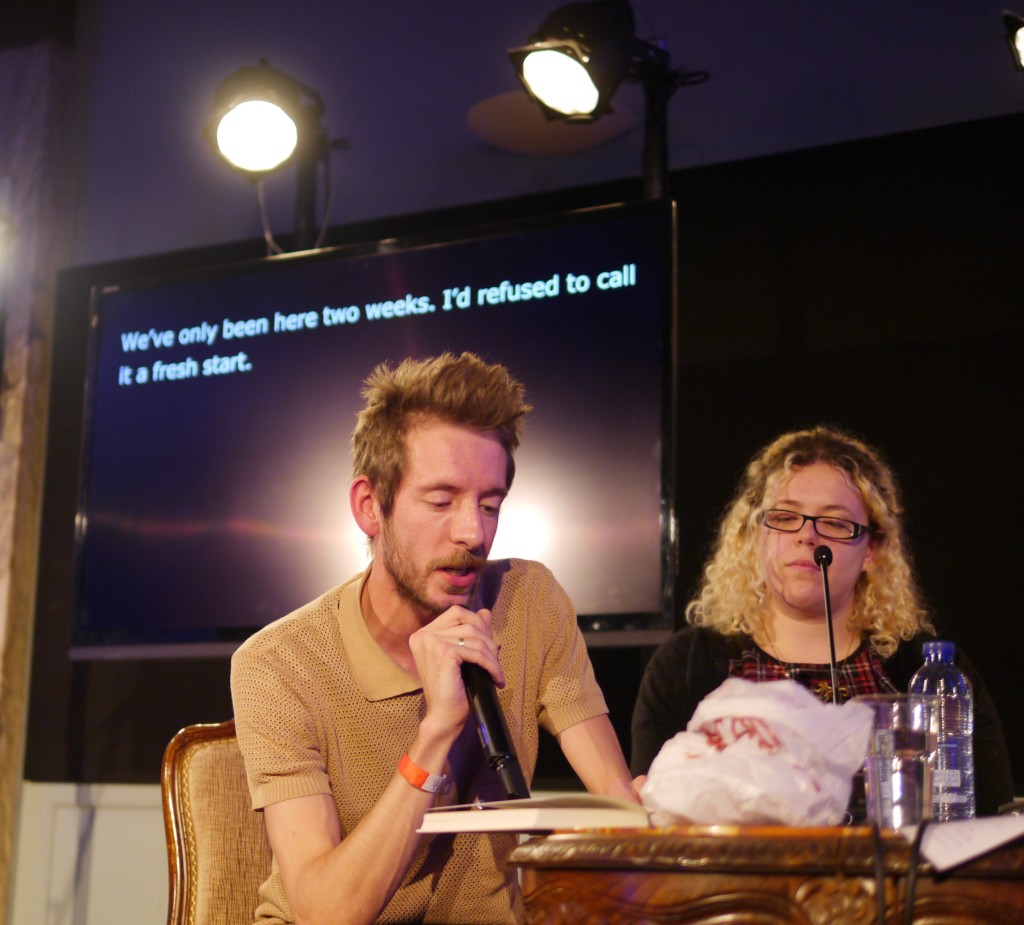 He shared with is some insights from his favourite short story from the book, Beyond the cliff.

To Daem it is a very personal story, a fictionalized autobiographical story about him and his ex-girlfriend moving to Paris to rescue their relationship which ultimately ends in tragedy. 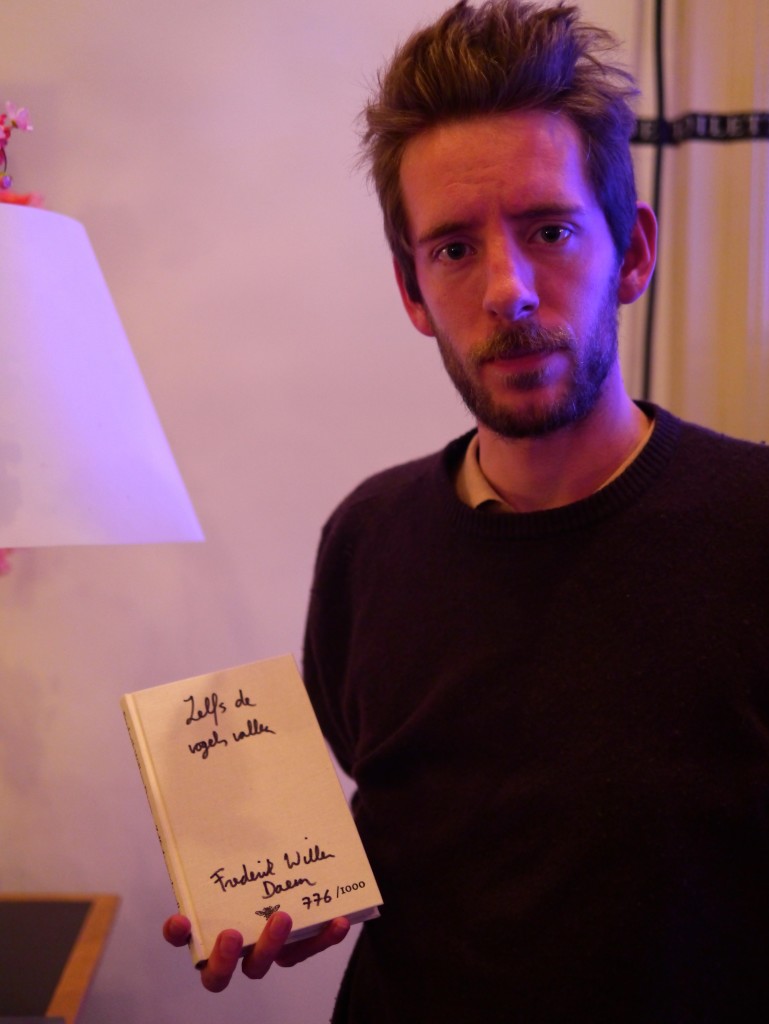 “I think it has something to do with me not wanting to accept the end of things even if they are unavoidable.” says Daem. This explains also the title of his book.

Somethings in life are inevitable.

While not real, the book to him is a piece of realistic fiction. Invested with personal emotions. Friends came to him after he published the story, asking him how he was coping after his breakup in Paris which was funny because in reality he never moved to Paris!

The last major act of the festival I attend is the genre-transcending Cinematic Orchestra who perform some of their classics like ‘The Man with the Movie Camera’ while also performing a few tracks from their upcoming new album.

I leave the festival and the Hague moved, beguiled and enthralled.

I definitely will be back. At €30 for the day and €50 for the whole festival , it is fantastic value for money. One weekend that you will not regret.

Like Barry’s short stories, going to the Crossing Borders Festival is like walking a tightrope. There are a few twist and turns, you’ll fall and fail occasionally but in the end you will leave enriched and so much more better for the experience.

I attended this festival as part of an annual storytelling project I developed about cool, quirky festivals around the world called Must Love Festivals. If you are curious to know more interesting festivals like this, please visit the website MustLoveFestivals.com

I also would like to take the opportunity to thank Lennart, Mieke , Dewi and the rest of the team at Den Haag Marketing for inviting me to the Hague and supporting the Must Love Festivals project.

Michel and the good folk at Crossing Borders Festival for a fantastic few days and last but not least Jill and David at Expedia UK, our lead partner for Must Love Festivals. 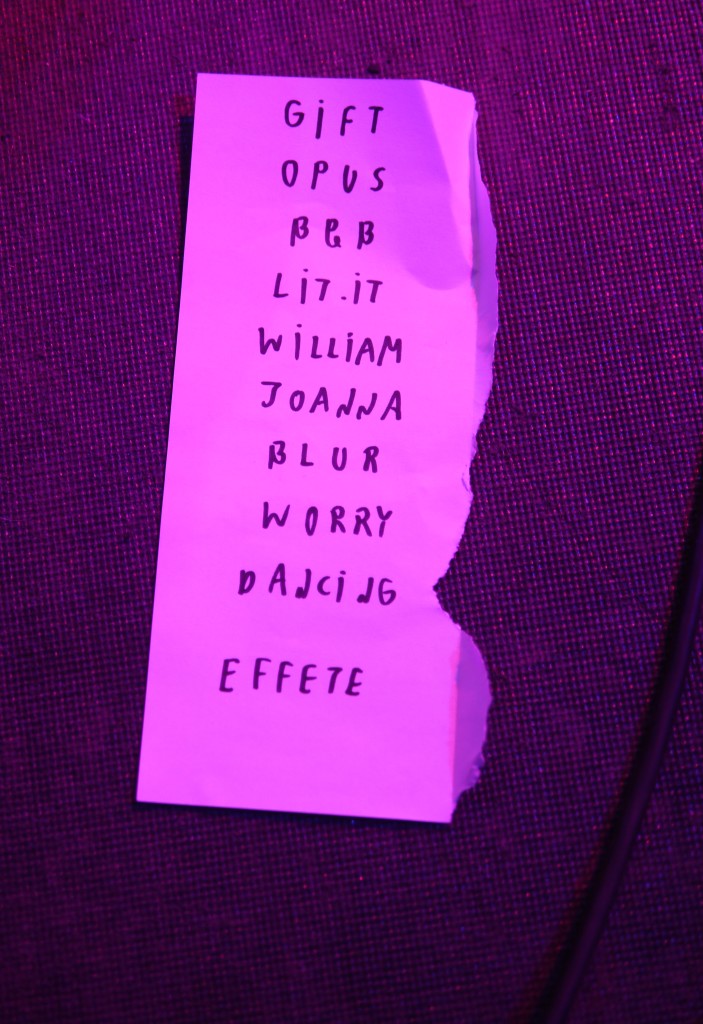 Little Comets playlist for the night.

There are lot of fantastic neighbourhoods to choose from when you visit Berlin but few rival Mitte. For me ‘Mitte’, the ‘middle’ and heart…