I didn’t know what to expect from Sofia. It isn’t generally on the top of travel lists and many may mistake it as a city for passing through. Having spent more than a week there, I enjoyed my time there more the longer I stayed. They may not jump out at you right away but there are some great places to explore, eat and drink.

Sofia offers large parks, good public transportation, great restaurants, free public events and friendly locals. Sofia is also one of the most affordable cities in Europe. Add to that some small but growing pockets of nightlife and you’ll start to see why it’s worth spending more time here.

Sofia also seems to pride itself on being understated. I enjoyed the food and found some amazing restaurants but it’s sometimes difficult to capture how great the food was in photographs alone. The extra flair just isn’t a part of their everyday cuisine. The local chefs would probably tell you to come and give them a try before making your judgment.

That’s sort of one way to look at Sofia. What it lacks in flashiness it more than makes up for in character, quality and affordability. And you have to see it (or taste it) for yourself. Here is the Cheap Eats Guide to Sofia, Bulgaria. 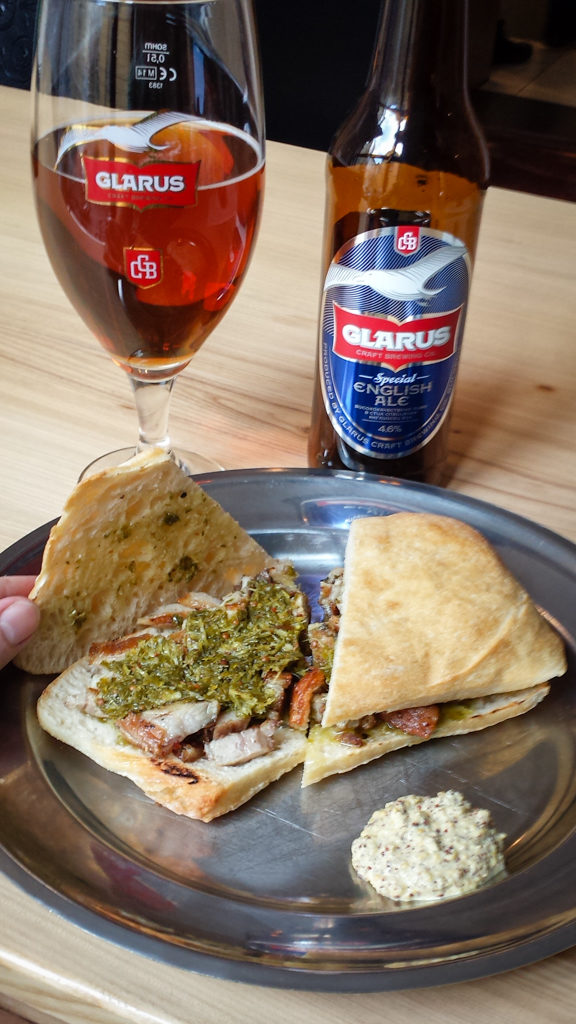 Stepping inside, I was immediately taken by the architecture of MEAT. White walls were flanked by blue tile and a multi-level build gave it the appearance of an ultra-modern loft, rather than a sandwich shop. This also provided an intimate dining setting where attentive staff behind the counter were quick to answer questions and make recommendations.

Though considered one of the ‘pricier’ options for a burger or sandwich due to the popular area of town, everything on the menu is still €5 or less. More importantly, everything being consumed by other diners as I entered looked fantastic. My biggest problem was going to be figuring out what to order first.

Porchetta has always been a personal favorite. The staff explained that the pork was roasted with herbs similar to the traditional Italian preparation style. The sandwich was then topped with salsa verde made with chopped herbs, lemon juice, chilies, mustard seed and olive oil. I was sold. I ordered it with some fries and an English beer they recommended.

A few minutes later, the porchetta sandwich and fries arrived. The bread was fresh and perfectly crispy. The meat was perfectly seasoned and cooked, falling apart in my mouth. The salsa verde was a perfect addition, adding flavors of fresh herbs, a richness from the oil, a hint of acid from the lemon juice and a subtle amount of spice from the chilies. Whole grain mustard was served on the side. The fries were crunchy and delicious. Everything went well with the beer.

The braised veal, carnitas with avocado, burgers and oxtail soup all sounded delicious as well. The flavors, hip vibe, helpful staff and affordability make MEAT a great place to grab a sandwich or burger in Sofia. 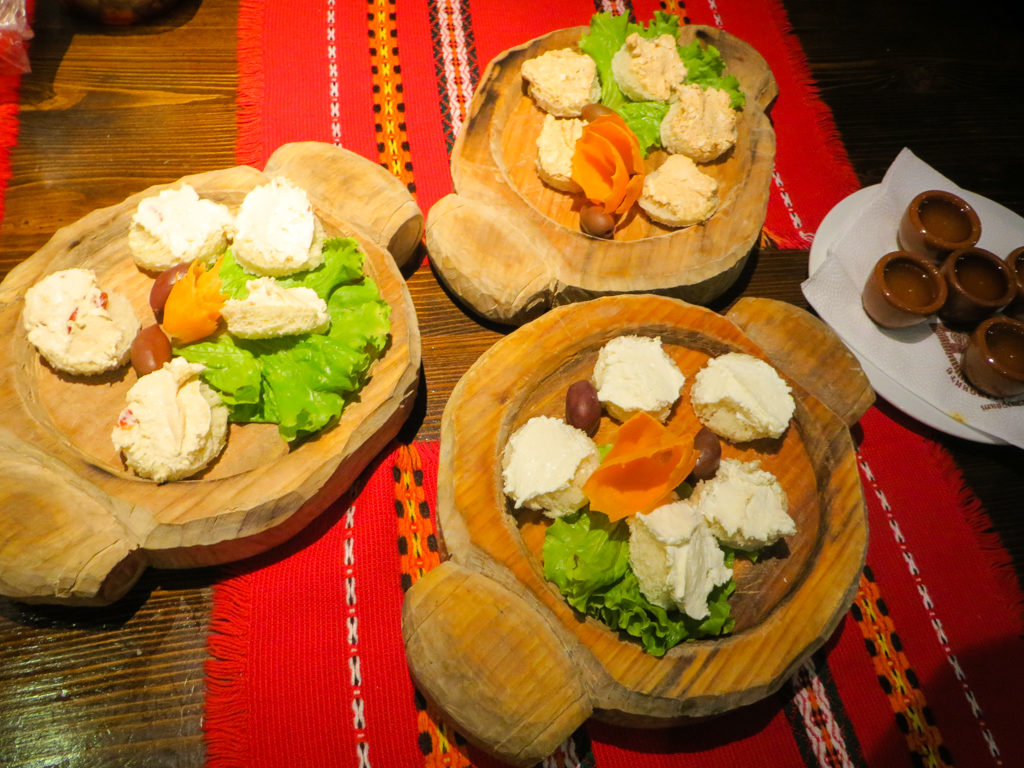 Local cheeses and breads on the Balkan Bites tour

Meets daily in front of the head statue at Stefan Stambolov at 14:00

The tour is free!

A group tour with its own guide, four restaurants, and a 2 hour tour of the city. All of this for… free?

Welcome to the Balkan Bites tour. The only one of its kind in Europe.

We met at the park and the tour guide remarked that we were a small group of four. This was good because sometimes the groups are so large they have to turn people away. For this reason, it is recommended that you show up 15 or 20 minutes early the day of the tour.

First we headed to a local soup shop where we enjoyed a  half serving of tarator, a cold Bulgarian soup made with cucumbers, yogurt, dill, garlic and seasonings. It’s commonly served as a first course or in between courses. We listened to the history of the dish and the importance of yogurt in Bulgaria. At another stop we enjoyed local breads and spreads (more about them below). 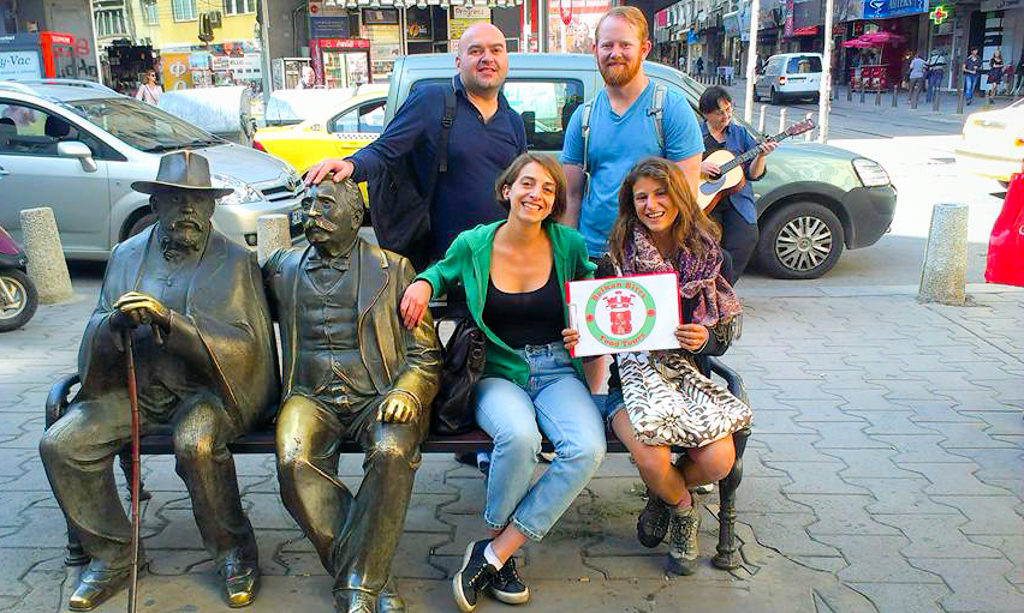 Balkan Bites waited until the end of the tour to take a photo. We were all very full and struggling to smile.

After a break we enjoyed half a burger from a new local chain called Farmer’s. We walked through more of the city, listening to some of the history of local shops and food. Lastly, we finished the tour with local breads and cheeses. Just when we thought it was over, we were served a shot of pelin, a local spiced wine. Everything was delicious. We couldn’t believe it was all for free.

This was one of the best tours I attended in Europe. I was happy, educated on local food and quite full. It could easily sell for €20-25 at minimum. Please tip the guide if you enjoy yourself and whichever foods you like, try to revisit the restaurant to try more of their selections. They offer the free food as a form of marketing and exposure to travelers. 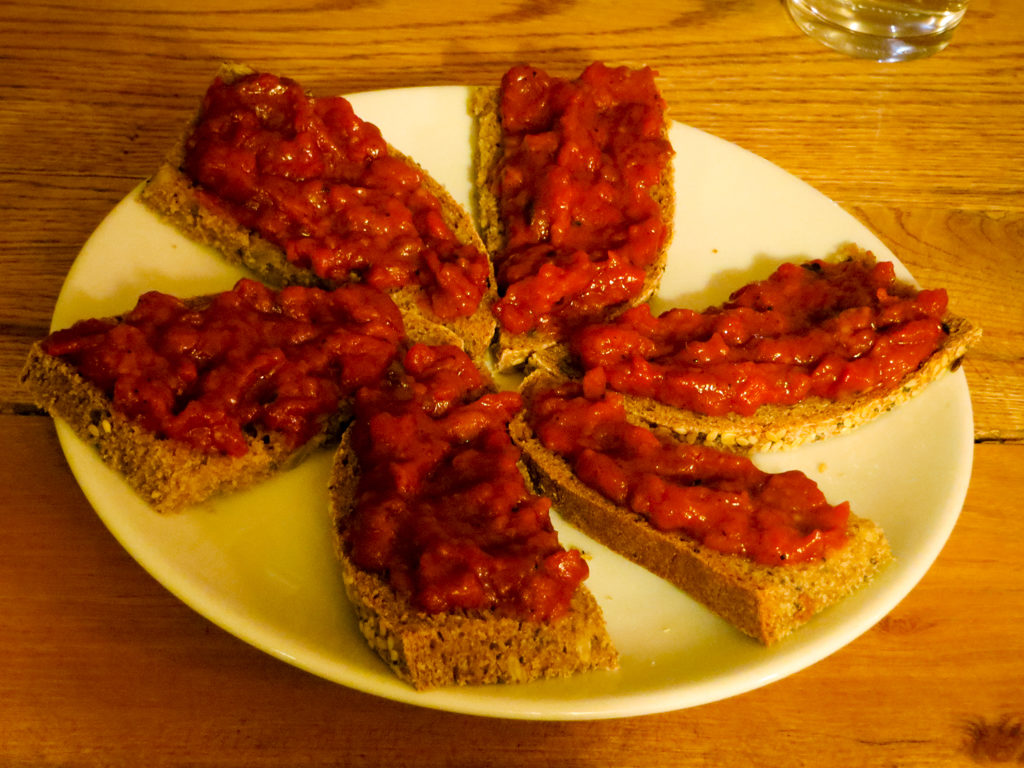 My favorite stop on the Balkan Bites tour was at a restaurant that offered vegetarian and vegan dishes called Sun Moon. They cooked all of their own bread and made a number of different types of traditional Bulgarian spreads. The two we sampled were:

The fresh bread was sliced when we arrived and all of the dips were added and brought to our table. The kiopoolu was more complex and colorful with all of the different colored roasted peppers. It was very good. The ljutenica was my favorite, though. Something about the eggplant, tomato, spice and herbs just went together perfectly. I could eat that dish all day long. Simple, healthy and at less than a euro for 100 grams, an incredibly affordable spread. Highly recommended. I wished that I had more time to come back and try more of the fresh breads, sweets and other spreads. This is a great restaurant for carnivores, vegetarians and vegans alike. 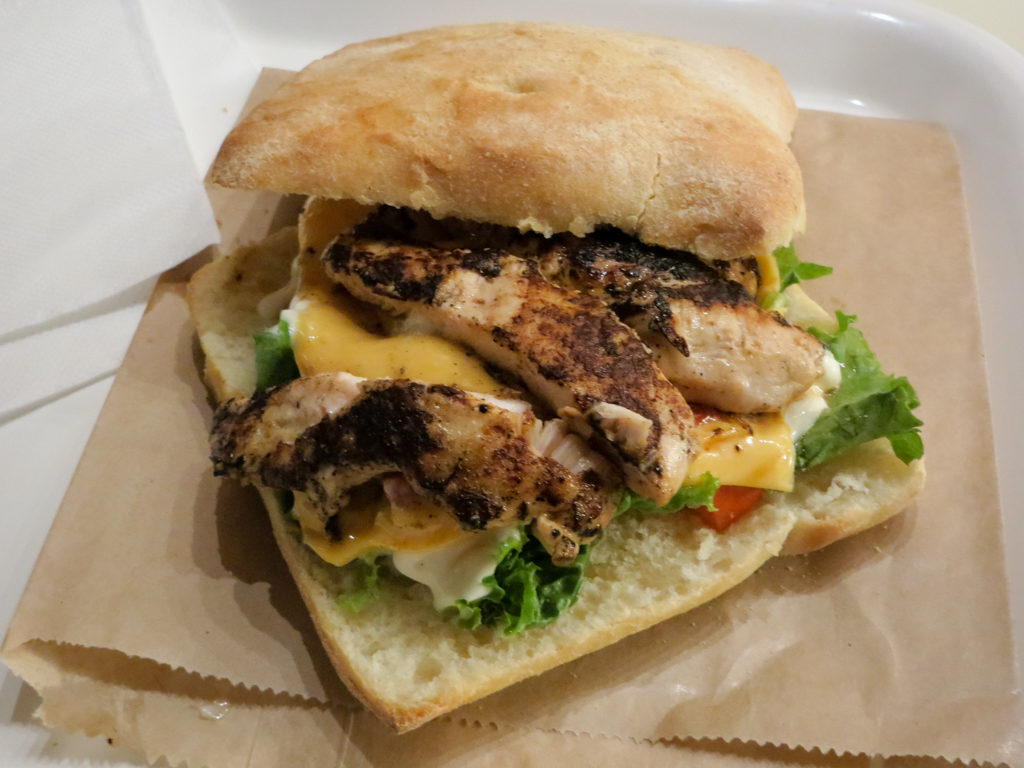 The simple and tasty chicken sandwich at Farmer’s

Local Bulgarian farms provide the humanely raised meats and organic vegetables. The bread is also made locally. Farmer’s is a relatively new healthy and simple restaurant chain that makes food quickly, for those who are on the go. They offer sandwiches, salads and other options but nothing fried, meaning they do not offer french fries.

The burger from the food tour was so good I just had to return later that evening. I gave the chicken sandwich a try this time. Fresh, flavorful chicken breast that was grilled, local cheese and vegetables and creamy sauce. It wasn’t fancy but was very good. For a mere €2 this was a great deal.

Farmer’s offers a large range of salads and vegetarian/vegan options as well. My friend who attended the tour requested a vegan option and was provided a portobello mushroom burger which she enjoyed. For vegetarians, vegans and carnivores alike, this is a great place to grab a meal on the go in Sofia. 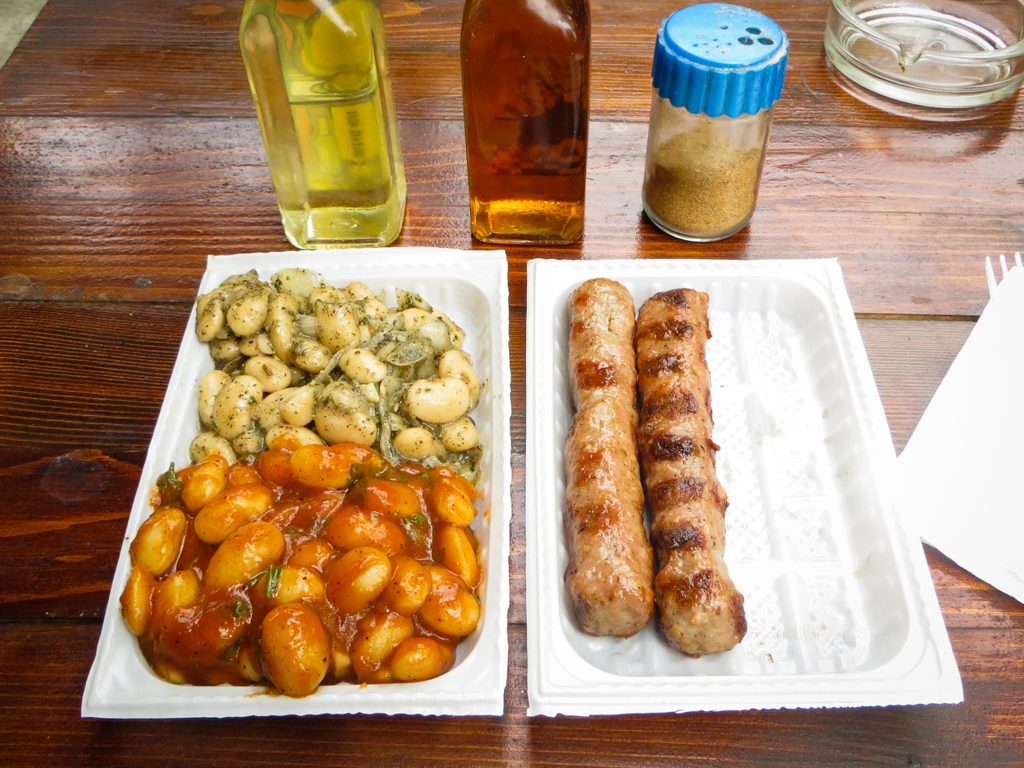 €1-4, Hours vary but many are open early to late

No food guide would be complete without mentioning local favorites cevapi and baked beans. Cevapi is a skinless sausage popular throughout the Balkans. In Sofia it’s available with multiple types of meat but beef and pork are most common.

The most common homemade items found at these local street vendors include:

Nearly everything starts around €1-2 and it’s very possible to eat a filling meal for €2-3. The simplicity and ease of locating these street vendors and grills make them another great local budget option on the go. 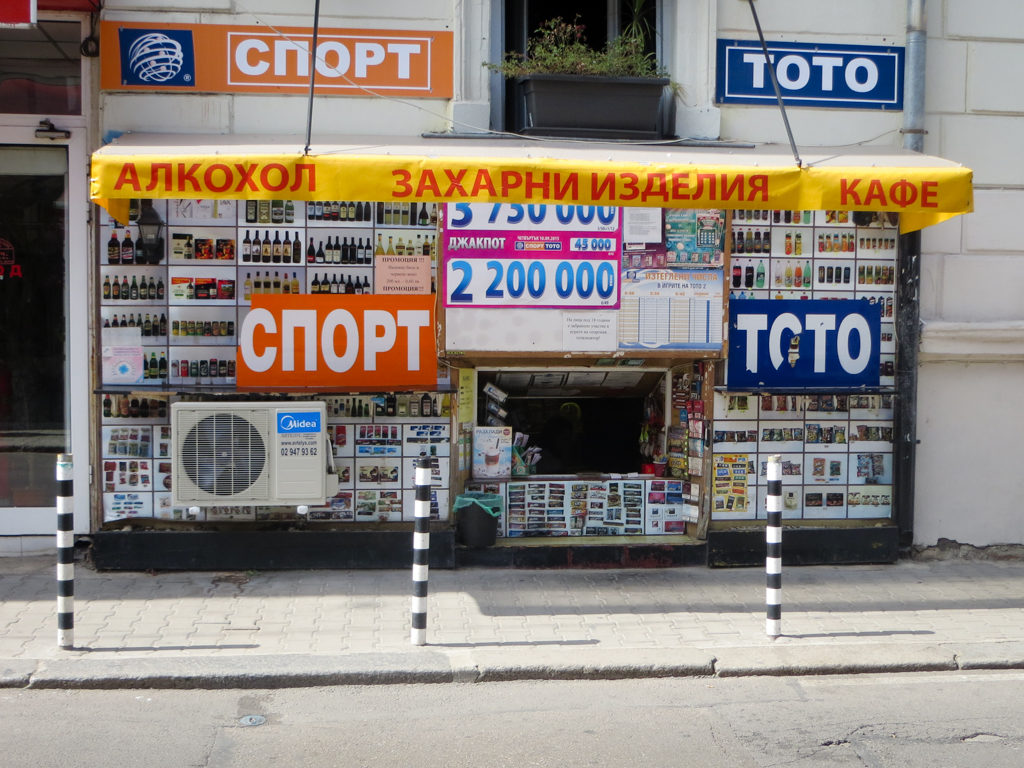 A ‘squat shop’ in the heart of Sofia

I hope that the Cheap Eats Guide to Sofia helps you find some delicious and affordable meals! Enjoy your time there!

Cam writes about street food and travel throughout Europe and Southeast Asia. He loves talking to locals about food and culture and is always looking for his next meal. His goals are to help readers appreciate food on a budget and let them know where to find it in each city. He also enjoys learning more about the people in each place he visits and sharing travel tips. Follow his journey and find recommendations at www.CamEscapes.com

By Peter Parkorr of TravelUnmasked A Melbourne Metro YHA review, in what is arguably Australia’s coolest city. Are the bars better here or in…