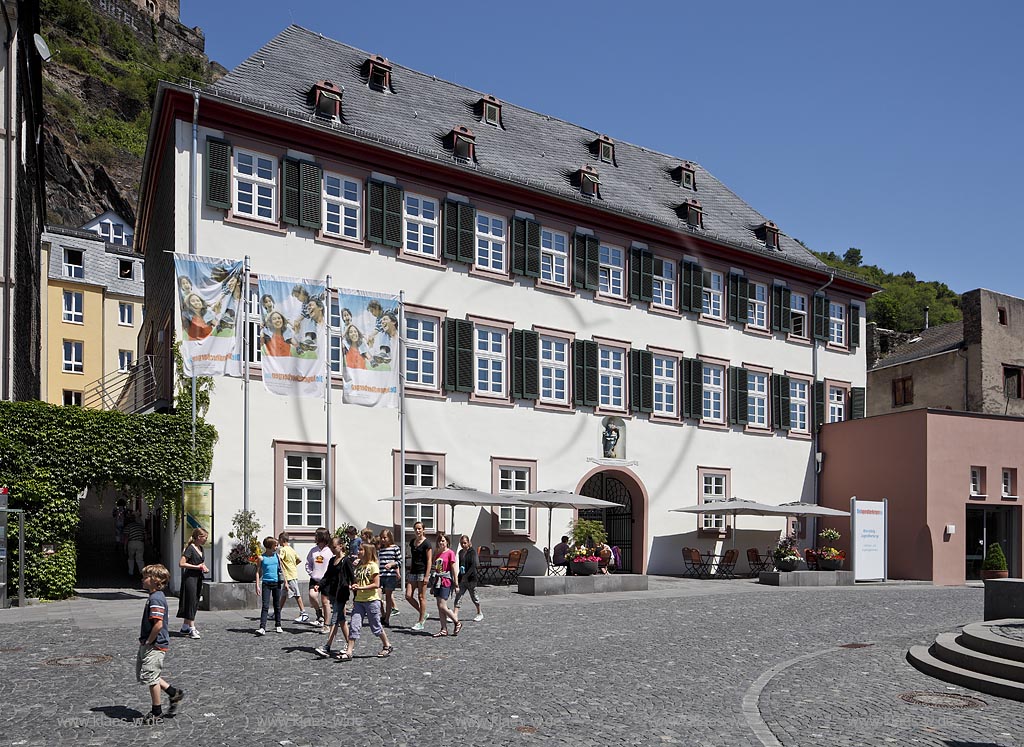 DJH Kaub, one of the many stunning hostels from the German Youth Hostelling Network I will be staying
with during my trip

My ‘German Wanderlust’ took root during my teenage years in Kolkata.

In the summer of 1997, many years ago along with my sister and brother in law, I had become a frequent visitor to the local Goethe Institut otherwise known as the ‘Max Mueller Bhavan.’

We had decided to visit the Institut after my sister had received v. favourable reports about their excellent ‘Kaffee und Kuchen’ that was served in the cafe.

The ‘kuchen’ was indeed a revelation ( kaffee was ok..) but even more amazing was the world of German music, literature and culture that we discovered inside the Institut.

It became for all three of us , a portal to a whole new world.

I got my first taste of classical music discovering everything from Brahms Symphony no 3 to Beethoven’s 9th symphony to ‘The Ring Cycle’ by Wagner thanks to their extensive CD and record collection. 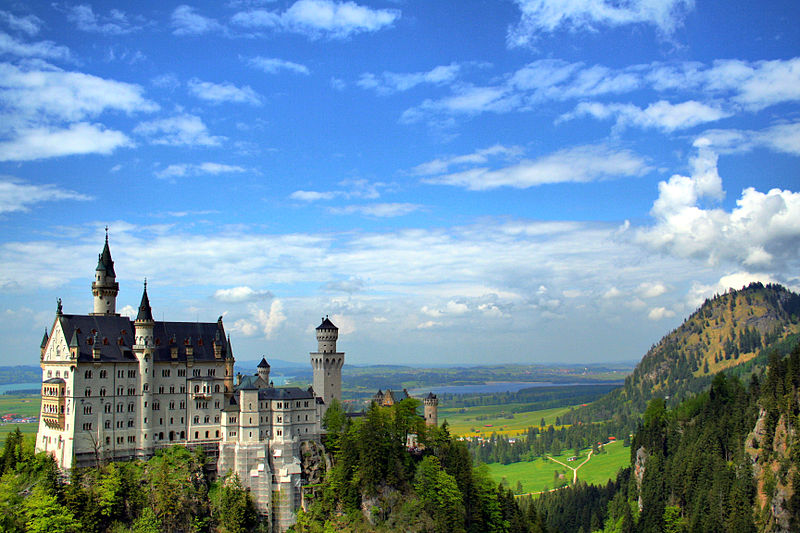 Schloss- Neuschwanstein: one of the many enduring iconic landmarks and youth hotspots I’ll be exploring in my trip.Note: This picture is licensed under the Creative Commons Attribution-Share Alike 3.0 Unported license.

Balmy and boring summer afternoons were transformed in their air-conditioned library.

Via the pages of photography and architecture coffee table books , I encountered iconic German landmarks like the Schloss Neuwahnstein, the Berlin Wall, Brandenburg Gate & the Kolner Dom.

I couldn’t understand a word of German.

Still, it was fascinating for me to see the images and faces of this unknown land leaping out at me through these books-perfect escapism.

The faces and unchartered landscape of this new world even became more vivid inside the Institut’s auditorium where we watched the films of Fassbinder like The tears of Petra Von Kant, Wim Wenders’s Wings of Desire & F. W. Murnau’s landmark vampire film Nosferatu

In the last few years, I’ve been fortunate to indulge my German wanderlust, albeit briefly, visiting Berlin and Munich on short weekend visits.

If not anything , these short visits have inspired an even stronger lust  to return to these cities and see more of Germany ….

I present to you the BudgetTraveller’s German Wanderlust– a 47 day rail trip across Germany. 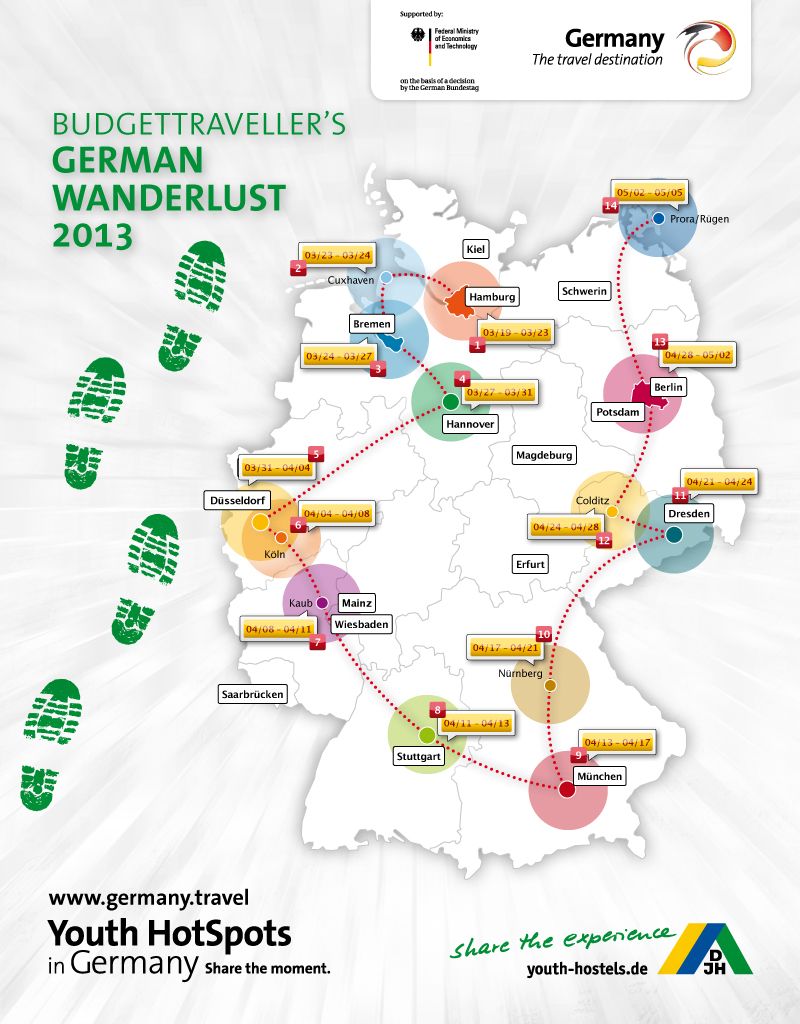 It’s the year of youth tourism in Germany and I am very excited to be involved and as part of the project I am embarking on this epic railtrip across Germany to explore, share with everyone some of the country’s coolest youth hotspots. 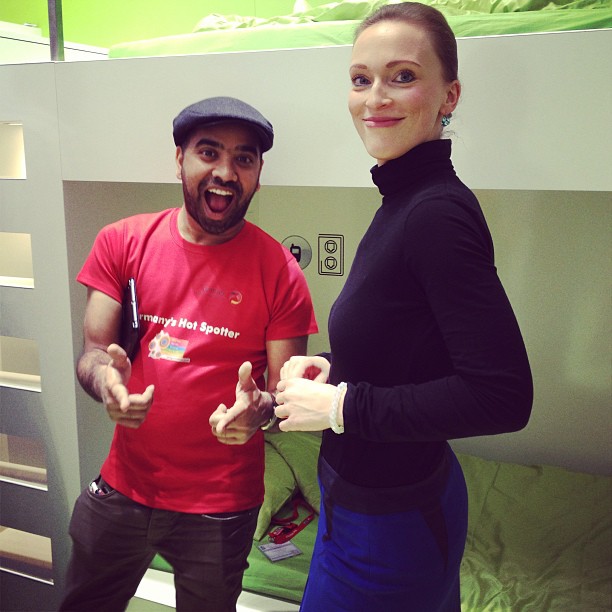 This epic, upcoming trip provides me an amazing opportunity to bring to life those fairytale images from my youth so there is a nice personal connection for me there.

From Munich to Rugen Island, from fairytale forests and castles to the best markets and cool cafes to iconic landmarks like the Royal Gardens of Herrenhausen in Hanover , Schloss Neuschwanstein Castle, BMW Welt Museum to the chalk cliffs of Rugen Island- it promises to be a trip of epic proportions.

I’ll be a guest of the German Youth Hostel Association and lifting the lid on their stunning hostels in their network, like the DJH in Kaub (pictured above)

Plus I’ll be riding the Deutsche Bahn network, enjoying the beauty of Germany’s stunning natural landscape from a train window-what better way to explore this beautiful country?

You can also get involved by getting involved in the’Youth HotSpots Germany’ Instagram Challenge!

Share your HotSpots in Germany and tag your images with#YouthHotSpotsGermany and #GNTBITB !

This is what you can win: 4 InterRail Passes from Deutsche Bahn to travel throughout Europe, 8 “A&O to go” packages as well as a Hotel stay for 2 persons and other prizes.

Don’t forget to follow@youthhotspotsgermany  where they feature your best shots regularly.

Visiting France soon? Thinking of using the train? Here are 5 , really easy to follow money saving tips that should save you money…